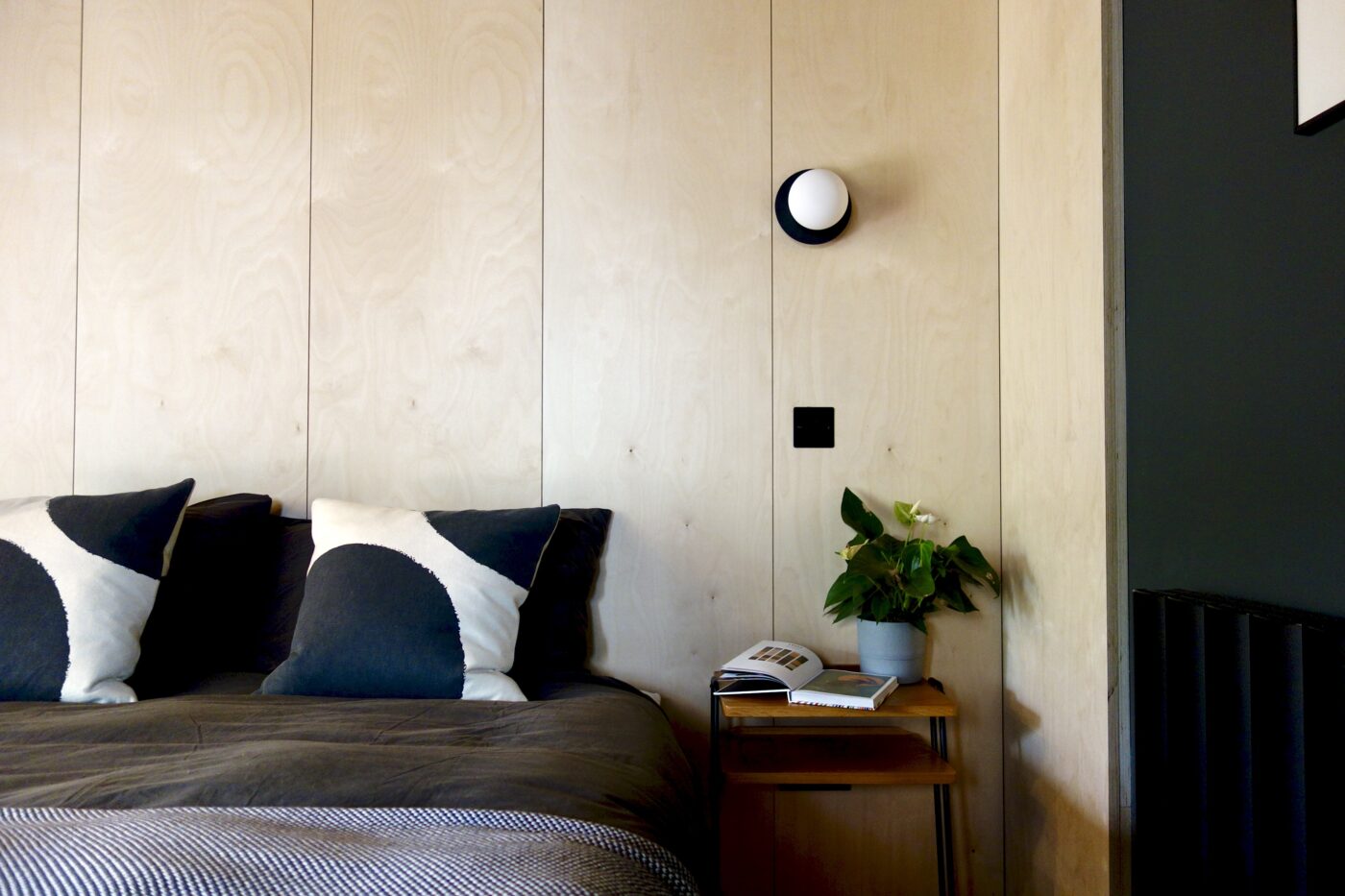 Hello everyone, how’s your August going? Today I’m sharing a (very nearly) final reveal of the master bedroom at the Harrogate project. It’s the last room to be completed after a four year long renovation of a large, five bedroom Edwardian property. I’ve learned and gained so much from working with Vanessa and Andy and it feels quite emotional knowing this will be one of the last rooms I share from their house on these pages.

The first floor is the one that had the biggest layout change, with only a few walls remaining where they once were.

The first floor layout as it is now.

As you can see, the first floor is where the Upper Brook Street Guest bedroom is, probably one of my most shared and liked projects to date, winning the best bedroom tour on Houzz in 2017 – that was really exciting!

Today’s master suite is across the landing at the back of the house in what was this space:

It was a hotchpotch of stud walls used to create two kids bedrooms and a dark and pokey corridor to a randomly positioned first floor lean-to style conservatory. The estate agent tried their best to showcase this room on the sales listing…

Estate agent photos make me laugh. The reality was something like this:

Kids box room with an internal window looking into the play room.

I think you’ll agree, we could do better with these spaces and this was our plan…

The door to the old corridor remained where it was becoming the door to the new bedroom, as did the the old external wall (the thick black line behind the two chairs) well, because you need some in order for the house to remaining standing. Rather important.

Even though it was a large space (approx 6x6m), the remaining stone wall created a tricky L-Shape situation that we had to work around. Setting the position of the king sized bed was vital in order to fit the rest of the elements in. The wish list was for a large open plan master suite with:

The build for this room was all done as part of the kitchen/diner knock through, which you can read all about here.

The wrap around glazing was done over two floors with the kitchen completed last summer.

Understandably, Vanessa and Andy needed to save again in order to complete the master bedroom and ensuite, but we had to plan for first fix over a year in advance in order to position the plumbing and electrics whilst the builders were on site. Not ideal, but that’s how these projects go sometimes.

So let me show you how this space has turned out. There’s still some painting of skirtings and architraves to do, but I wanted to show you where we’ve got to as it’s 98% done and I think it’s a beaut!

As you can see from the photo, where the original stone wall was taken down, a rather large nib remains, this supports a big beefy steel holding up the back of the house.

I wanted this nib to disappear, so I suggested we built the birch ply wardrobes around it. It was then important to continue the rhythm of the doors (not to be confused with 90’s dance hit ‘Rhythm of the Night’) around the back of the bed to create the effect of a seamless full height headboard.

First fix wiring was done way before we even knew what was going here, I mean we had an inkling, but it’s never the best idea to attempt first fix without knowing what’s going in at second fix.

Luckily it all worked out – Opal Disk Wall Light – HouseOf

Even though the room is big, the space for the bed isn’t massive. A simple platform bed was ideal, something with a limited footprint, only a smidge wider than the size of the mattress. Luckily these guys had just the thing, which had been waiting in another bedroom on the floor above for about three years. Remember this room?

Yes, that’s the one. This room was always done on the understanding that eventually it would become a kid’s bedroom. The Heal’s Brunel bed and bedside tables were always destined for greatness, moving into what would eventually become the master bedroom.

The Brunel bed with the headboard whipped off

The unfinished (yes, they were left naked) birch plywood wardrobes and panelled wall came in at £5k for materials, labour and fitting. Not cheap, but I think is actually really good value for what it’s given this room in terms of practical, seamless storage and the aesthetic impact it’s had.

Here are a few more before and afters for you:

During the knock through, taking the big, structural stone wall out

Wall down and all the spaces connected

I would have quite liked to have added another wall light above the mirror here, like so:

This was one of the downsides about having to do first fix for the room over a year before we got to the finer details. Admittedly it won’t make or break the room. But ya know… I kinda like it with the light central to that top section of window frame.

To read more about the window system used in this project, go back to the read about the kitchen project as it’s all in there.

There’s the skirting and rad pipes to paint, a rug to come, new coffee table, artwork etc… But let’s talk about that coffee table shall we? It should be called “Wally”. Because since moving to this house over four years ago, you probably could have spotted Wally at some point in every room, taking up temporary residence. Wally is a great reminder to everyone that you can always save up for those final pieces and it’s fine to make do for a little while.

Seen here in the Drawing Room as the make-shift coffee table whilst we waited for the actual table to arrive. This was the very first room we worked on all the way back in 2016. See how long these renovations can take?

The Hiko pendant light from John Lewis is a wallet friendly nod to the Vertigo light that the homeowner has loved since I met her. I would have really liked to have gotten a larger light in here, but budget constraints meant that we had to cut back at this point. It does work beautifully with their artwork though doesn’t it?

So let’s talk about the lack of window coverings shall we? Simply put, they didn’t want any. I did mention that it might make sleeping a little difficult, what with all that wraparound glazing, but they were set on leaving it all open. Made my job easier as I hate sorting window coverings (what kind of interior designer am I?)

It was the lack of window coverings that made me suggest painting the sleeping area dark including the ceiling, in the hope that it would help lower the morning light levels for just a few more minutes.  I have it on good authority that it does, but not enough to actually sleep in during the summer. So the Harrogate master bedroom has officially been renamed “the winter bedroom”.

So that’s pretty much the same view as before. You can see the woodwork still needs painting, but I wanted to show you just how far this space has come from the box room jigsaw it once was.

On the right, you can see the opening into the bathroom..

…which I will write about on the next blog. I’m struggling to get any more written today as Charlie is incessantly telling me Minecraft jokes. So while I go and lock him in a sound proof room with some juice and a packet of custard creams, I’ll leave you with a view from the ensuite bathroom into the bedroom framed by the black bathroom door frame.

I really hope you like today’s reveal. In fact if anyone likes it enough to buy it, then as much as it saddens me to write it, this five bedroom house is now on the market.

I know. These guys love a project. I get the easy job of coming up with the ideas and steering them in the right direction from time to time. But they do a lot of the work themselves and liaise with all the trades directly… and now this five bedroom house is finished (apart from the skirting boards, Andy!) they want to start all over again.