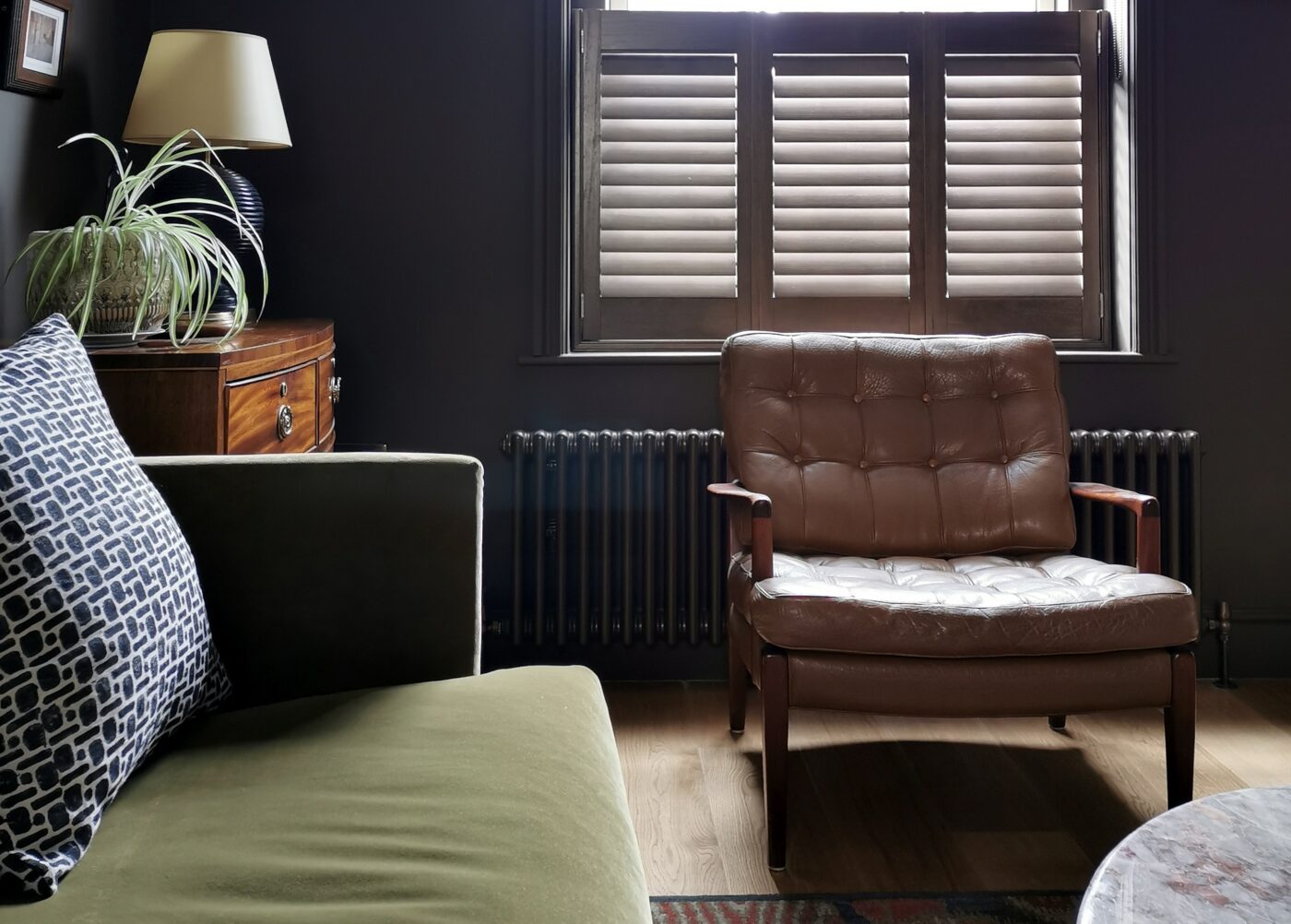 Hello! Three months it’s been since I last wrote. A whole season. A quarter of a year. 13 weeks! I thought it was about time I got back into the swing, and what better way than to offer up the final reveal of Victorian Coach House Living Room; one of my favourite rooms to work on since starting this crazy ass job six years ago.

What once would have been the tack room next to a stable, this property was converted into a two bedroom residential property many years ago. The room was ok as it was, but it could certainly have been better. Things that needed addressing were:

The brief for this space was to “create a calm, and cocooning living room” for the home owner, let’s call him Mr O. Mr O wanted to create somewhere cosy to sit, read a book, listen to music or play his guitar, somewhere guests could comfortably join him for conversation (hopefully very soon!) in front of the fire.

The first thing we did was sort out the fireplace – always the messy jobs first. Working with Carlton House Fires, who were brilliant, we opened up and repositioned the opening, added a black slate surround and black hearth, lined the opening with brick slips and refitted the existing log burner. And now the room has a fireplace to be proud of and much more in keeping with its 2.6m ceiling.

A fine example of how the right and wrong scale and proportion can make or break a room.

The joinery was next. Time for the new picture rail, architraves, new cornice and ceiling rose…

By just sorting the fire and period detailing out, the room was already looking and feeling so different. Because rooms do feel different you know, and it always surprises me how different they can feel when they’re wearing the right outfit.

It was then time to deal with these monsters:

It took a fair amount of work to set the pipes in the right place for the new rads as we didn’t have access from the basement, what with it being a solid concrete floor n’ all. We also didn’t want to have to take the whole of the floor up as that would have meant taking off all the skirting boards which inevitably would have disturbed the plasterwork. So my plumber worked with his joiner to do some fancy pants jiggery pokery and the difference the correct pipework and radiators made was all kinds of brilliant.

If you’re going to go to the trouble of paying for fancy pants new rads, then get your pipes sorted. Your eyes will thank you.

Time for all the before and after goodies then…

The artwork is by Californian based artist Isabelle Emrich. Being on and in the water has a special significance to Mr O, this painting being the starting point and major refernce for the room design. It really is stunning.

A special mention for the most beautiful marble coffee table i’ve ever seen. It’s an Italian, 70’s number which was shipped over from Italy which is bonkers as it weighs and absolute tonne. I mean it. It’s like a bloody car… perhaps a Fiat 500?! I wish I could get a better photo of it in all its glory because it’s a work of art. A sculpture in the room which is also happens to have a handy surface for your cuppa.

The old shutters, yeah they were fine, but they were white and if you’re going dark with dark woodwork, then brilliant white shutters are a big no-no. So they were sold to someone local and a new dark wood shutter was fitted.

The half height shutter allows daylight to flood into the room whilst providing daytime privacy and the roman blind softens the window, offering evening cosiness when needed. Once the new black Crittall style windows and doors are fitted to this room as part of the big build later this year, this whole set up will make much more sense.

I love how this antique Georgian, bow fronted chest of drawers provides a warm, Mahogany  backdrop to the “rare as rocking horse droppings” Arne Norell chair. A mid-century classic which we had shipped over from Poland.

So glad we nabbed all these pieces before bloody Brexit (can’t say Brexit without adding a choice adjective. Soz). I don’t think it’s going to be quite as easy to get our mitts on European design gems anymore.

The newly added rails and architraves made such a difference, with the picture rails being put to very good use throughout the room used to hang a mix of old and new artwork.

I’m extremely proud to have this room added to my portfolio. It was a bit of a dream project really, getting to play with lots of vintage and antique goodies mixed with some super beautiful new designs and a bespoke art commission. Each and every piece was a treat to specify, down to the Ligne Roset log basket.

Mr O completely embraced the joy in all the finer details from sockets to rad valves to door handles. A pleasure!

And incase someone asks, walls and woodwork are in Benjamin Moore’s Char Brown, did you know brown is the new black? Come on, keep up!

So that’s your lot for today peeps. I really hope you like this room as much as Mr O and I do. I’ll try and not leave it 3 months until I next post, but in the meantime, I would love to hear your thoughts on today’s reveal.

Can you believe there might have been a horse in here at some point?