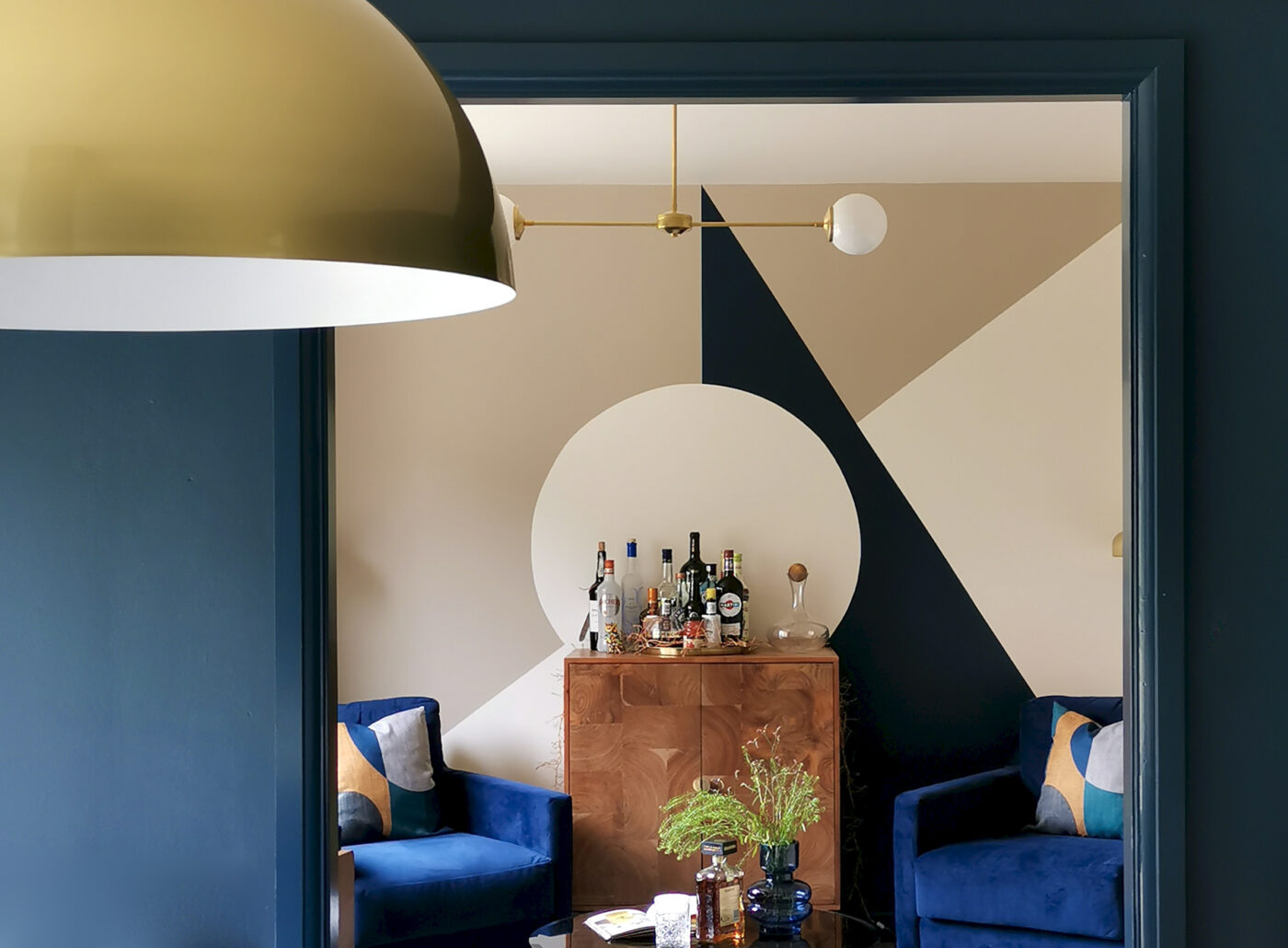 Hello everyone, it’s been photoshoot central of late so i’m back with my second post of the month. It’s another final reveal post, plus I’m sharing some tips on how to add personality to a new build property.

The homeowners, a young couple were keen to put their stamp on their new four bedroom home so contacted me to help them with the ground floor. We worked together remotely during lockdown Mk1, me finally visiting for the first time in summer 2020 once the project was underway.

I’ve written before about how new builds are some of the hardest properties to re-design as there can be very little to be inspired by. There are no fireplaces, chimney breasts, no alcoves or nooks and crannies to build shelving into, no high ceilings or period features such as cornice, dado and picture rails. The rooms in a new build are often purely functional, rectangular rooms which have been kitted out in low-mid range fixtures and fittings.

One of the reasons people opt for new builds is because they either don’t want to or don’t have time to renovate. They don’t want the hassle of stripping walls, restoring fireplaces and sanding floorboards – they want to move in, maybe paint a bit, hang a bit of wallpaper, put up some artwork and get on with their lives. Fair doos. I’ve certainly got clients who wished they’d bought a new build when they realise their period house is going to take them 10 times longer than they thought to have it exactly as they want it.

One thing I don’t think you should do however (and I do see this quite a lot) is try and make a new build look like a period property. Nearly everyone’s Pinterest board (the ones I see) are full of period properties for inspo, despite them living in a 60’s terrace, a 1980’s bungalow or a swanky new flat. The earliest period I’d draw from for a new build is Mid Century and that’s because the scale of furniture and those clean lines are right for new build size spaces with 2.4m ceilings. Other designers may disagree with me here, but for me, that’s what feels right. If you’ve not read my post on Scale and Proportion yet, it’s a good one to bear in mind.

As you can see from the pics, the kitchen in this property was fine. It wasn’t really their cup of tea (or mine), but it was only three years old and too good to rip out. In fact, the kitchen was changed very little, but we definitely improved the space with some super simple tweaks.

The dining furniture from their previous house was too formal for this space, so that needed to go (as did the lighting above it, that TV bracket and those vertical office blinds). For small dining areas that share the space with a kitchen, don’t go for high backed dining chairs, they take up too much visual space. These kind of chairs are much more suited to a dedicated dining room.

Everything else was staying including the cream tiled floor which ran from inside the hallway to the kitchen and rear utility space and downstairs WC. It did make the room feel quite cold and clinical and wasn’t good for the room’s acoustics but we worked with it as best we could. Here’s what we did…

The key word here is LARGE. Large rug, large light. It’s a sure fire way to make a ‘meh’ space look very cool. A rug was a must have item, because it:

Rugs are great. If you’re thinking of getting one to go underneath a table, then make sure you get one that’s big enough; 190 x 290cm minimum. If you pull your chair out to sit down and it’s not still fully on the rug, then that rug is too small. Them’s the rules.

My client’s Pinterest board for this space was full of dark blue kitchen units, which we didn’t have. Yes, we could have possibly painted the door/drawer fronts, but it’s not cheap to paint a kitchen you know. It’s about £100 per front/panel to get a good quality finish which would have been over £2k. So instead of mourning the fact we didn’t have their lovely dark blue kitchen of dreams, I splashed that colour all over the walls instead. I went with everyone’s favourite; F&B’s Hague Blue, colour matched to a washable Dulux finish and the ceiling is in F&B’s Dimity which was a pretty good match to the kitchen. If you are painting a room from light to dark, please don’t leave your ceiling in pure brilliant white. It’s too stark a contrast.

If you can’t afford to update your kitchen fronts or re-paint them, then handles are an easy and cost effective way to give it a mini make-over. It’s like taking your trusty old little black dress and making it look totally different by switching up your jewellery. These walnut and brass handles (along with the shelves) added some much needed wood grain to the room. A more tactile choice and one that picks up on the warmth of the dark stained dining table and other woods that feature throughout the ground floor. The light kitchen units and cream tiled floor were calling out for some deeper tones to offset it all.

The double doors that lead into the Snug were removed (after a bit of convincing) and the paint design on the back wall of the Snug became a piece of art, all nicely framed by the old door architrave. By drawing your eye towards the back of the adjoining room, it makes this whole space feel soooo much bigger.  There’s something called “shared space” between rooms – the passing space between one room and another. Doors block and eat up that shared space. But by removing the doors you don’t really need (the ones you never close) you gain back that shared space making the individual rooms feel slightly bigger and brighter that they actually are. Magic.

The large brass pendant light is exactly what this space needed. An average sized light here would have been pretty boring. This one says, “look at me, i’m so beautiful and confident and I cast light all along this lovely table”. I did actually hear it say that.

There wasn’t a lot to work with here, in fact the only thing staying was the carpet. This space was to become The Snug. A space to sit, chat, have a drink, play records etc. I believe this space is also used for the lady of the house to practice her Yoga.

Because of the Yoga, the pendant light couldn’t hang very low for fear it being whacked by moving Yoga arms. So instead of it being large and low, we went large and loooong. Oh and for those who are wondering, yes, the coffee table gets moved to one side when it’s time for downward dog.

The asymmetric paint design whilst offsetting the symmetry of the furniture layout provides just enough detail to give this space its own identity… whilst simultaneously complementing the kitchen.

I can confirm that the drinks cabinet is 100% full.

The wall lights on either side of the opening were fitted at a jaunty angle to mimic the diagonal lines of the painted mural opposite.

So there it is, a good example of how to change the feel of a space without actually changing very much at all. It’s all about choosing pieces and colours that will:

If impact is what you’re after that is…

Anyhoo, I’ll be back soon with the final reveal of the living room from this property. It’s a great before and after with some super special bespoke cabinetry that I can’t wait to share.