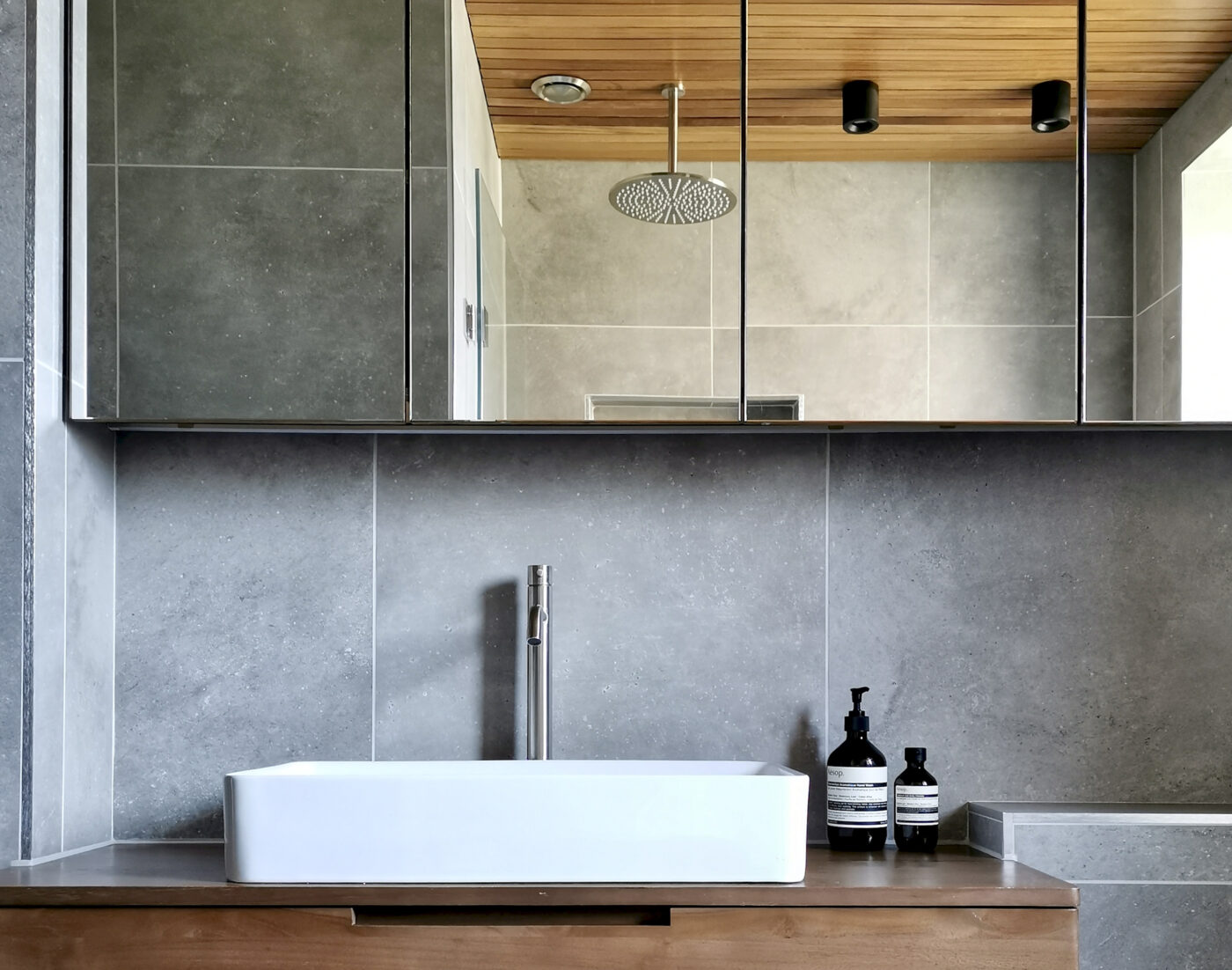 Hello May, how are you all doing? Your umbrella been getting a good outing this month? Today i’m back at the Georgian Apartment for for the final reveal of the bathroom. Hoorah!

This is what we started with…

A very small and narrow space indeed which surprisingly (or not) the previous owners had squeezed in a loo, basin, bath and a separate shower, but absolutely no storage whatsoever and not a lot of room for “people”.

When planning a bathroom, always allow space for you, the user(s) to move around, especially family bathrooms as they often have the whole clan in there at bath-times.

Initially I gave Mr B a few layout options, which looked at providing a walk in shower next to a plunge bath (a smaller footprint bath with much higher sides so you sit up and soak rather than lie down), but as Mr B also needed to use his bathroom to shower off his little Yorkshire Terrier after long muddy walks, we stuck with a shower over bath set up.

A lot of people can be a bit snobby about having showers over baths, but I think they’re actually the best possible solution for most bathrooms. Most bathrooms in the UK are not much bigger than a super king sized bed (about 4 sqm) so why try and squeeze in that seemingly fancy separate shower but compromise on much needed bathroom storage and usable space?

Despite having literally no floorspace left for storage, we had plenty of wall space which we used to the max! I designed a full height mirrored storage cabinet that ran the full length and height of the main bathroom space. This sat above a double drawer vanity unit that ran into a shelf above the wall hung loo with hidden cistern.

After – with new black double glazed window too!

Another thing the mirrored cabinet did was make the room look twice as wide. By taking the glass all the way up to the ceiling, it seamlessly reflected the beautiful Iroko slatted ceiling, giving you twice as much Iroko goodness.

Before – with nowhere to put your rubber gloves or Mr Muscle

The bespoke, made to measure wall cabinets housed all the shampoos, lotions, potions and loo rolls, and the vanity drawers were filled with clean towels. This allowed the rest of the room’s super simple, clean lines to remain simple and clean.

All of the brassware was in brushed stainless steel. Nothing shiny in here thank you. The stainless steel with the concrete effect tiles and warm timber tones provide a timeless bathroom design that will keep Mr B sorted for years to come.

The fixed shower head was plumbed in from the ceiling which left all of the walls around the bath completely clear and the two large niches (with recessed LED lighting for more relaxing bath times) keep the edges of the bath clear too.

Now let me talk you through this unassuming, but rather brilliant valve by Crosswater. It’s a three-way valve which means it controls three different outputs. I love how everything’s completely hidden, let me show you…

In the pic above you can see the three outputs all controlled by that one valve:

But where’s the bath filler?

It’s there! See that bath overflow? That’s also the bath filler. Love it. So there are no pipes, rails, hoses or taps hanging over the bath. Everything is hidden away and all worked from that natty little three way valve.

Hatch into a crawl space

You can just about see the beautiful Georgian panelled ceiling. Alas, we couldn’t take the false ceiling down to expose this beauty as the apartment needed this void to house all the wiring and plumbing that ran between the individual apartments. It was one of the reasons for cladding the ceiling with the Iroko slats, to make the ceiling in this room stand out as much as the other ceilings in the apartment. Hard to compete with the Georgians, but I do think the Iroko is a lovely feature in this bathroom.

The new ceiling was raised a little and the space above was re-boarded so it would be used as a more usable storage space. If you look very closely, you can just about see the new access hatch, but Mr B’s joiner did a great job of making it look almost invisible!

I’ll end with one more before and after, because, aren’t they always the best bit!

Thanks again to Mr B for letting me share the photos with you all here. And thank you to everyone who commented on the previous reveal from this project. If you’ve not seen that one yet, click here to see all the before and afters from the open plan living, kitchen, dining space. As ever, it’s a real treat to here your thoughts so let me know what you think of this bathroom re-design in the comments below.