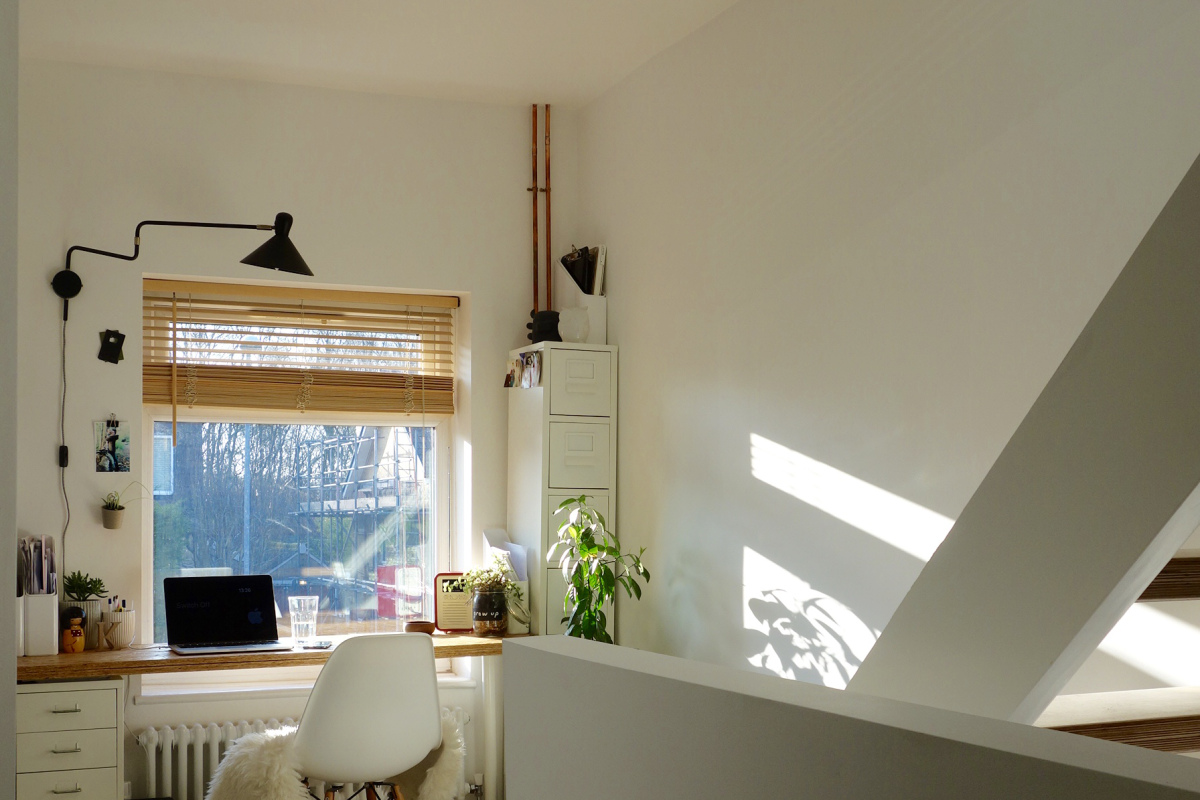 Here it was pre Loft Extension.  In our box room, which was less than 2 x 3m. It was the perfect spot for me to set up Making Spaces HQ. It really wasn’t big enough to be a bedroom. In fact it wasn’t really big enough to warrant its own door, so we took that off over a year ago anyway.

Top Tip. If you’ve got a door you never ever close, get rid. Give yourself another square meter of space instead. And a better view. And more natural light. Go on.

Our 1960’s, 3 bed-semi had a very traditional layout, pre-build. Our plan was to incorporate the small, box room into the landing area, so it looked something like this:

If you’ve been following the build, you may remember we were sacrificing our box room in order to accommodate the staircase of our dreams. You can read more about that over here. The plan was to keep our landing open plan, light, spacious and my office would simply sit exactly where it was before.

I do love working from home. But to take advantage of being a home worker, you really do need a designated space. Plonking yourself on the kitchen table will not do. It’s ok for a day or two, but for four months, I do not advise it. At all. But for four months, that’s where i’ve been. On the kitchen table, as my poor little office became, what I can only refer to as the building site “shit-hole”.

The whole wall came down, as did the old landing balustrade. The staircase starts around the same place as the old bulk head was, so floor space wise I have about the same as I did before but it feels twice the size in here now.

And I have light flooding in from three windows now too. In front, behind and above. Lovely.

The view downstairs over what was the box room

The view as you walk down the new staircase. Such an amazing difference don’t you think? It’s just a pleasure to come to work in the morning.

And i’m soooo happy to have my desk back again. Oh how i’ve missed you. If you’re looking for a quick DIY this weekend, you can read all about how I made my OSB desk over here.

The magnetic wall on the left is still going strong and has been put to use again. I’ve given it a painted border to help it sit in its new surrounds a little easier. There was a fair amount of mess once the old brick wall and door frame was ripped out. We’ve worked hard to make good the mess that was left. The join of the two spaces almost looks seamless now. Like the landing was always meant to be like this. Almost.

So yeah, we’re still technically a three bedroom house as we’ve turned what was a tiny room into part of our landing. And i’m so glad we did. I think it’s made a real feature of our first floor, leading you beautifully to our new second floor.

We’ve still got lots to do around here, sort the carpets out, the handrail, more painting… but this little corner of our new open plan landing is done. I really hope you like it as much as we do. Not bad for a 3 bed semi?

Pin me for later!

Let me know what you think. Would you have done the same?