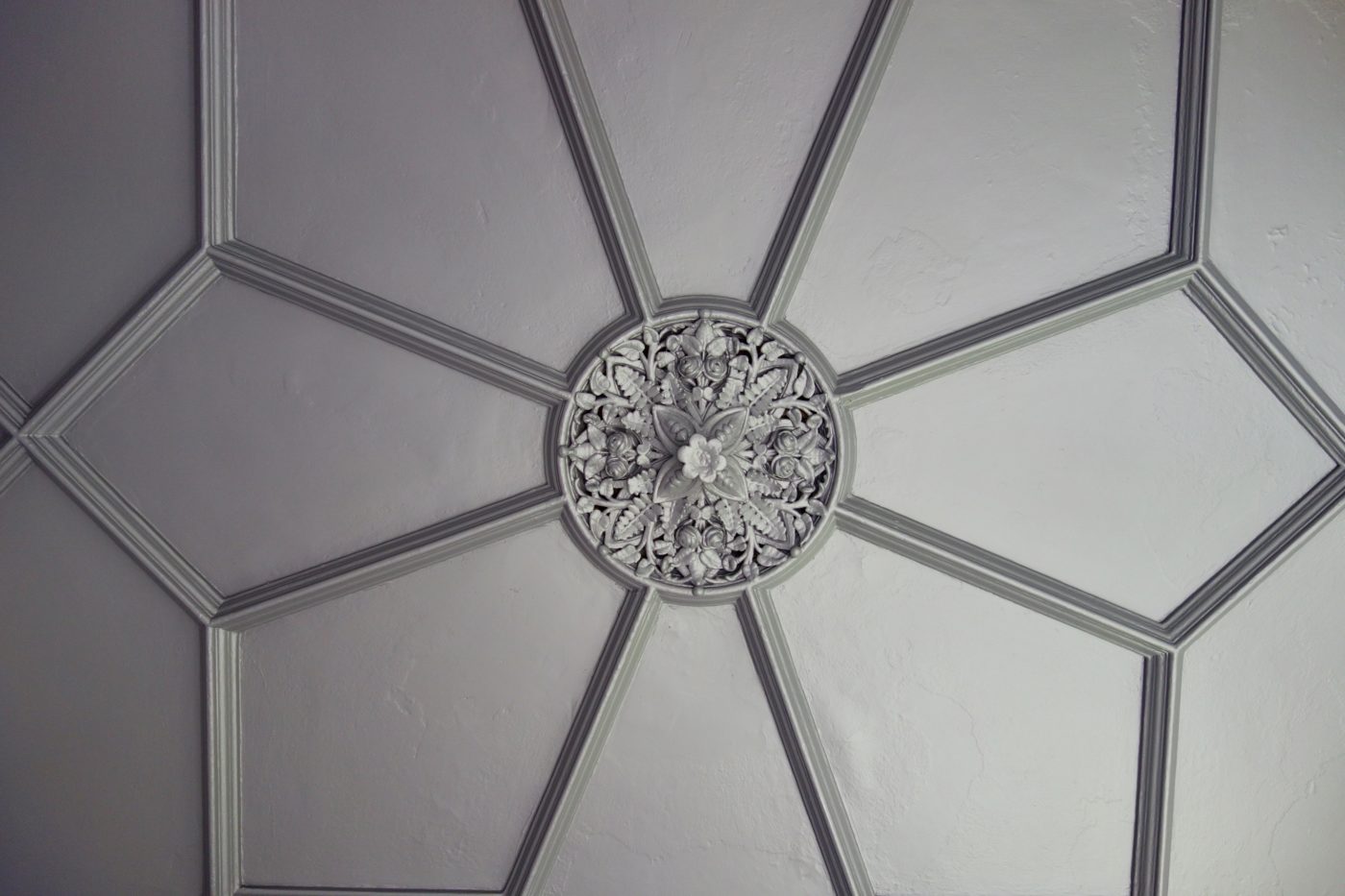 Hello hello! I’ve been away for a wee while after struggling to find the time to wash my own hair, never mind time to sit down and studiously write a blog post. I think three weeks has been the longest hiatus I’ve had since starting this blog back in 2015. And I suspect my posts from now on will become a little more sporadic than usual (especially over the school holidays – 7 weeks!!).

Anyhooo, I’m back today with an update on one of my projects after a site visit on Friday morn. Remember the Georgian Apartment I was working on…?

This be the one – read part 1 here if you like

With the f’ugly blue kitchen

Well progress has been going swimmingly since my last visit, so much so that I wanted to show you some photos, because now one room in particular has been painted, it is looking rather special.

The walls and woodwork are all in Paint and Paper Library’s Masque, the palest of greys. In fact on first look it almost appeared white, but I happened to spot an area where the white mist coat was still showing and it was clear it was definitely a gentle, warm grey. The ceiling is in Paint and Paper Library’s Perse Grey, which is a deep, rich grey with subtle violet undertones, which you can definitely see in the light.

I’m still trying to convince the homeowner to get rid of those 70’s transoms above the doors (I wanted them ripping out, boarded and plastered over). The existing skirting boards and doors are all going and being replaced with something more befitting of the Georgian period, so I’m really hoping I can twist his arm to do the same with the architraves too. Tbc…

The new floor (Quick-Step, Old Oak Grey) is due to be fitted next week with the kitchen fitting following shortly after. You can see how the new kitchen will look here…

This timeless monochrome scheme of off black and off white is made all the better by the enormous windows showcasing the beautiful wrap around gardens. The outside space with all that greenery was very much in mind when choosing the colours for this room. I wanted to draw your eyes up towards the ceiling (for obvious reasons) and outside of those 3m + high windows into the garden. It’s going to be a lovely spot to sit down a have dinner isn’t it? Here’s a reminder of how the dining area in this beautiful bay window should look once we’re all done.

In no way did I want mess around with that ceiling, so I decided not to wire in a ceiling light. Instead I’m using an existing wall light point (see below) and swagging a shed load of fabric cables across the room and loop them onto two or three small hooks in the ceiling so they hang directly over the dining table.

It will make for a real impact, with minimum mess and be a relatively cost effective solution. I’ll share more info about the light in due course. It certainly took some time to measure everything up for this 3.6m high ceiling!

Luckily I had ladders, a laser measure, a big ball of string and an extra pair of hands to help me work everything out.

It’s going to be a real stunner of a space don’t cha think? I get so giddy seeing an idea in my head slowly materialise into something real, in someone’s home. The best feeling.

Oh and before I go for today, I wanted to show you what was uncovered above the bathroom….

Just look at it!! And look what replaced that architectural masterpiece – a UPVC clad ceiling. OMG, I want to shoot the person that did this. How amazing would it be to have a piece of that ceiling to look up at whilst relaxing in the bath. Very! That’s how.

We’re due to start on the bathroom in November and I will be fighting hard to uncover as much of this as possible. It’s way too beautiful to be hidden away, especially by plastic cladding.

So that’s your lot for today. I really hope you like where this room is headed as much as I do. As always, I love reading your comments, so let me know what you think below!

On and one last thing: