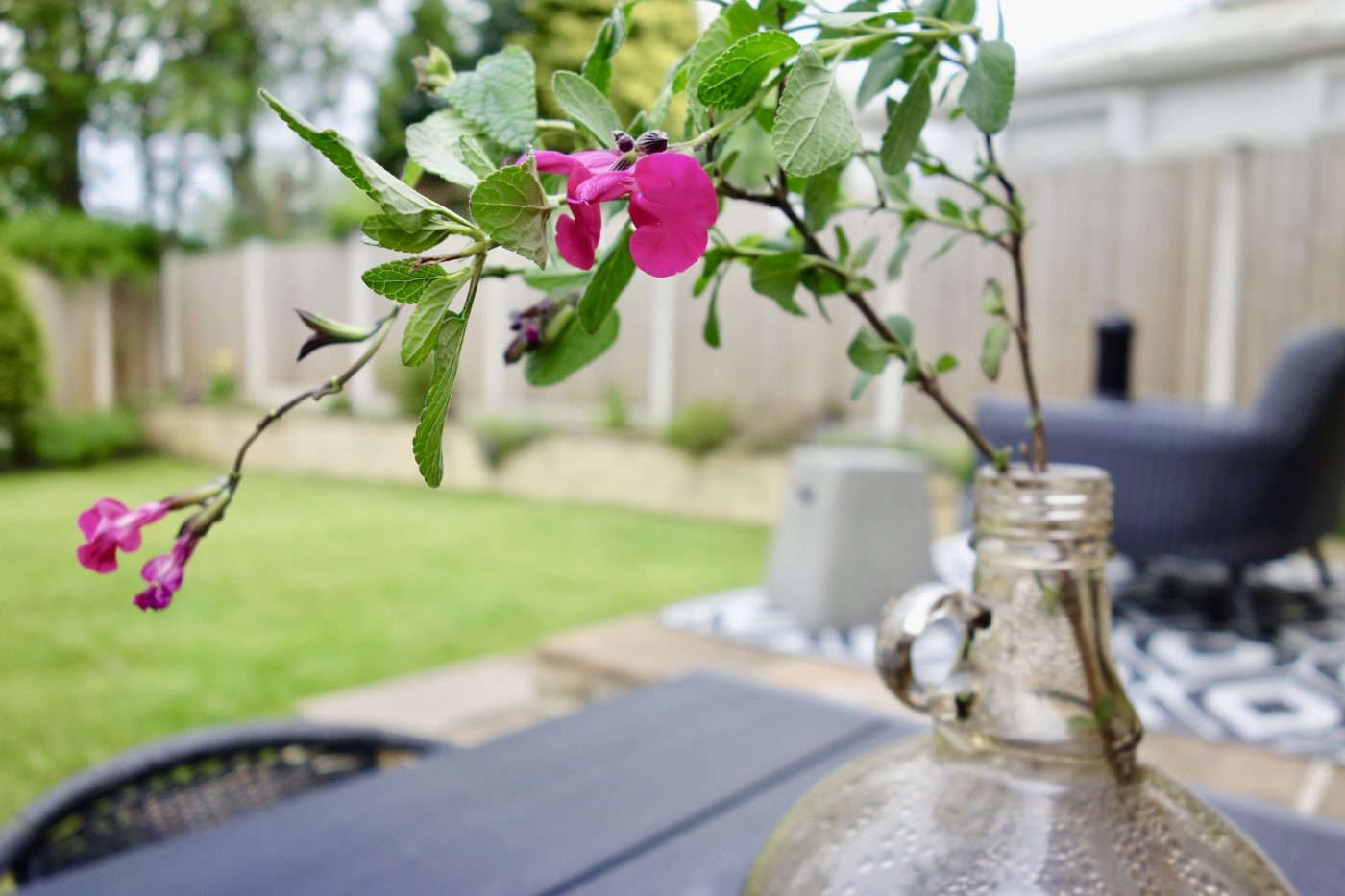 When we bought our little house nearly seven years ago. It wasn’t exactly what we wanted, but in terms of its location and the surrounding area, it gave us everything we actually needed. Or should I say, it had the potential to.

Earlier this year I wrote a post showing you all of the rooms inside. What they were like when we moved in and how they look now. You can have a nosey inside here if you like. The one space we’d never tackled fully was the outdoor space. A front and rear garden with a long driveway connecting the two. Pretty standard for a 3 bed semi.

We had done plenty to the rear garden over the past six years but never dealt with any of the building work and nitty gritty. Our driveway was a crumbling mess, drainage being a real problem, the front garden was on a slope and retained water like a sponge and the steps to our front door were a total disaster. All in all our house wasn’t the prettiest we’d ever seen.

Last October I wrote a post introducing you the big re-landscape project at chez Making Spaces. We had saved up and waited to have it all done properly for years. And finally we’d got to a point where a) the driveway was just to bad to ignore and b) I was embarrassed by the outside of our house. Not a good look for when you need to invite clients around or for running workshops from home. Nope.

The whole works took about 2-3 weeks from start to finish and clean up. Then it was over to us to do the rest of the work ourselves. Let me show you some pics of the works in progress.

Marking out the new line

Creating the edges to the new driveway

Tarmac base going down

Once all of the landscaping was done, we continued with more work.

It’s taken us a while to tick off these jobs one by one, needing to save up little and often along the way. But finally, the front of the house now looks like this:

It’s made such a difference, our house being an absolute pleasure to come home to now. We’re so happy with how it’s all come together.

We’re very proud of what we’ve managed to do with our humble home. The number of people who have knocked on, stopped us in the street or taken drive-by photos of our front garden, resin driveway and black windows has weirded me out a bit. But it’s also a good indicator that we’ve added value to our house.

Here are some before/during and after pics so you can see how far we’ve come since last October.

You can see that I painted the door frame to match the front door. We’re still saving up for a new one, but for now this does the job. If you didn’t know you could paint UPVC, then have a read all about it over here. I did our front door well over a year ago and it’s been absolutely brilliant. No regrets at all.

One of my favourite bits about this whole thing is the driveway. Mainly because I can walk down it in bare feet without losing a pint of blood. Our old driveway was like an assault course of gravel-y tarmac, but now… putting the bins out has never felt so luxurious!

This bit of the garden was previously dead space. No privacy from down the driveway. No privacy from our neighbours, who we love and get on with really well btw, but that concrete block wall wasn’t in the best shape of its life. I really wanted to add a dining area to our outdoor space but not right outside the kitchen door. So this secluded little spot was created out of pretty much nothing. The once unused space into the driveway now has a purpose and function and we think it looks bloomin lovely.

SOOO happy to have created two little zones. A mini living room next to our dining area. As the cladding extends into the driveway it gave us an extra meter of privacy. Behind that screening is our outdoor sink and bins. Nobody needs to see that stuff whilst relaxing in the garden, and now you can’t.

I kindly requested that my in-house handyman (the husband) build a bench across the screening;

Please can you build me a bench in the same material as the cladding so it looks completely seamless. And make it go up the steps so it blends into the top patio and connects the two outdoor areas?

And he did! It took about a day in total to knock up the framework and clad the lot. And whilst looking rather lovely it also gives us ample seating. We tend to cover it in blankets and outdoor cushions which makes this a really cosy space for alfresco dining (and drinking).

The new patio area was formed by re-using our old Indian stone. I would have loved to have used something more “me” but we just couldn’t afford to and it did make sense to re-use what was already there. And just look at home much crap is on that lawn. We pretty much killed off the grass with the workshop build followed by this project. It took a real hammering. The hubby was in charge of “Lawn Revive 2019” and he’s done a cracking job me thinks…

Into the garden – with an actual lawn.

By the way, if you’d like to read more about the workshop and how the hubster built it with his bare hands, then click over here.

So that’s our whole outdoor space. Hopefully there might be some ideas you can steal for your own outdoors. And to help even more, i’m going to add some costings, because i’m nice like that. Here’s the landscaping quote and breakdown:

We worked with Firstlight Landscaping who were fantastic. A great team of lads who i’d highly recommend to those based in and around Leeds.

So all in all that’s about £21k for the whole lot. Yes, it’s expensive, but just think about how much we’ve done and the value we’ve added to the house (hopefully!).

We could have saved £3.5k straight off the bat by not having the resin driveway and just sticking with tarmac, we could have halved our window bill by going with black UPVC. But we’re glad we didn’t. As always, consider cost versus value.

I would love to hear your thoughts on what we’ve done with our small but perfectly formed outside space. I know it won’t be to everyone’s taste (black) and it’s never going to win any beauty contests, but for us the exterior now feels like it holds its own against our interiors. I’m certainly not embarrassed any more that’s for sure. Let me know what you think!