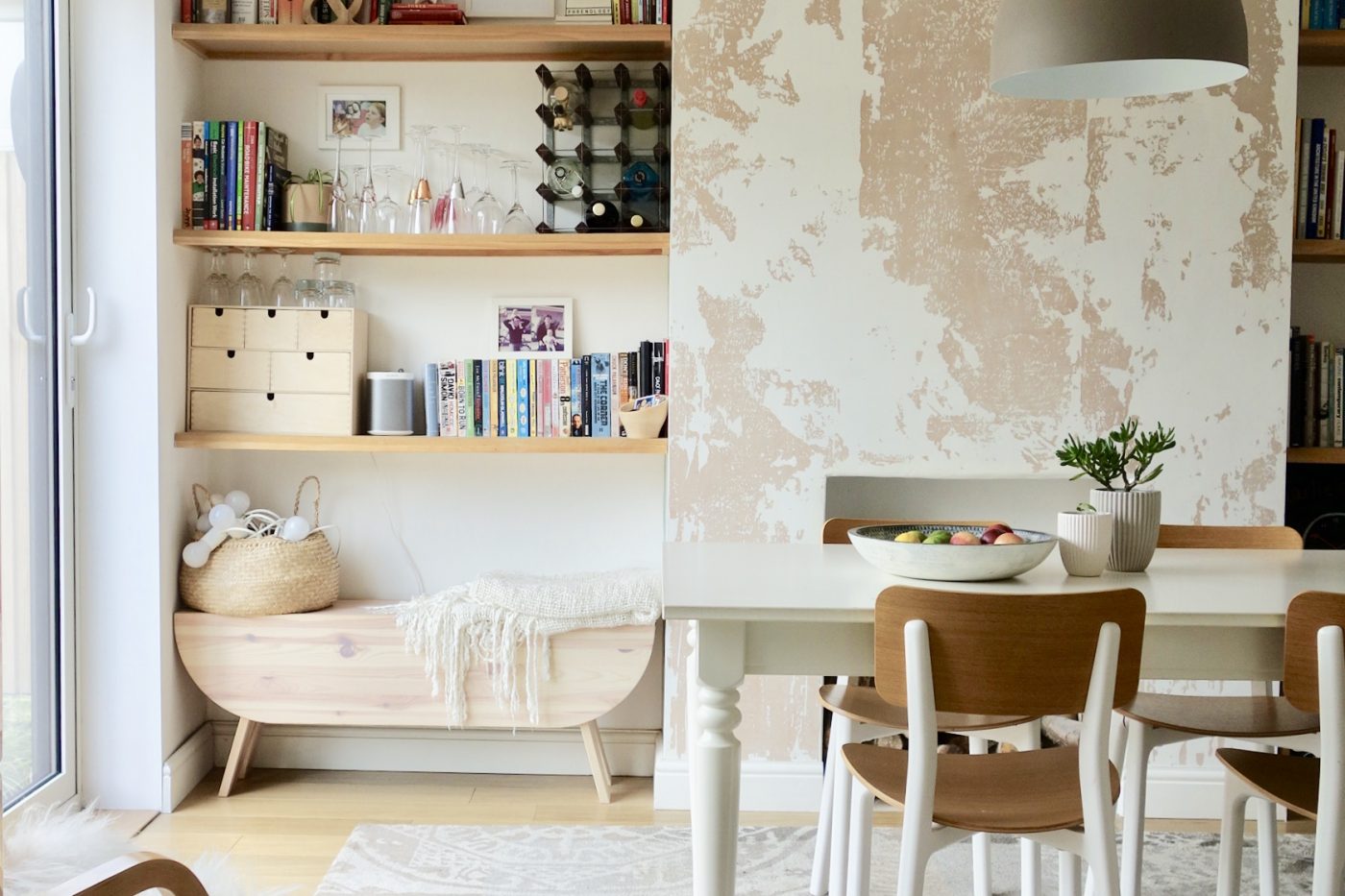 I do love sharing projects with you guys, especially the ones at our place, as you get to see just how normal our house is and how the smallest of changes can make the biggest of differences. This is certainly one of those projects!

We’ve finally got rid of the horrendous French doors that lead out onto the garden. I’ve always hated them, but when we moved in, it was at the bottom of a very long list of priorities to sort. They don’t look too bad in this pic above, that’s mainly because I’ve styled the crap out of the space, but the reality was they didn’t close properly, they were too small for the opening and they let a whole heap of cold inside.

Updating the back of the house is something we’ve been putting off for ages. It was a faffy job, needing the old walls knocking down before the window co could fit the new, much improved door. Our first choice? An aluminium sliding door, not bi-folds, as I wanted as much glass as possible across this back wall. Our garden is north-east facing and next door’s conservatory blocks out a lot of light to the back of our house. Bi-folds have way too much frame for my liking.

By tripling the amount of glass, I was hoping it was going to have several positive effects both internally and externally.

After lots of research, pricing up and wincing at the price of aluminium (man, it’s expensive!) we ordered our door from Clearview, the same company that fitted our loft windows back in 2016.

Read all about this project here.

Door now ordered and belt’s tightened, it was time to book the builder to knock out the two half height walls, ready for the old door to come out and the new one to go in.

Sod’s law, the work was all booked for the same week as the ‘Beast from the East’ (or was it the ‘Pest from the West’? I can’t remember now, there seemed to be a load of wintery white visitors that month). So, despite the builder being able to make the journey to ours and get the walls knocked out…

…. unfortunately the team that were due to fit our new door, didn’t have as much luck. Meaning we had an OSB wall for over a week whilst we waited for the snow to bugger off and the roads to clear.

10 chilly days later, the big day arrived and the fitters got cracking, having taken the old door out and started making good the opening for the new door. So excited!

You can just about still see the snow melting on the lawn….

The new door was now going in and the amount of glass compared to frame, was looking mighty fine.

Within a couple of hours, the door was fitted, and it was now up to us to make good the existing space, inside and out.

We’d got a floor to insulate, level and an oak door threshold to lay, plastering to sort, some external pointing to be done, skirtings to refit and walls to paint.

A few weeks later, and we’re about there, want to see how it all looks?

Let there be light!

The light and feel in this whole space has changed since that god awful plastic monstrosity was taken out.

I used to hate sitting next to those old patio doors, not only was it baltic, but those two half height walls took up much needed floor space. In an ideal world, where money was no object, I would have had a small extension across the back of the house so we could fit a couple of armchairs or a small sofa in our open-plan kitchen.

Alas, I had to settle for 20cm. But do you know what, that extra 20cm of floorspace from the old walls has made a huge difference. I can finally, after years (and I mean since forever) I can fit a small armchair in the kitchen. I can now sit down and drink wine whilst hubby cooks and the small person plays. (You can see another one of our outdoor projects in the background here too). And yes that is a hunk of log as a side table. It only needs to be big enough to pop a wine glass on. Job done.

I can now sit next to a door I LOVE, both inside and out. And I love it so much, mainly because I can’t really see it, but what I can see is perfect for this space.

Ok, now onto the colour of the frame. I didn’t want a dark frame internally, not in this room. It had to be white. I also knew that the external frame should be black. Even though I knew both of these things, I spent more time than I would like to admit deciding what colours to order, because there is no such thing as just one black and one white. Just know that if you don’t specify an exact colour, you’ll more than likely be getting RAL 7016 Anthracite Grey (architect’s fave apparently).

I went for RAL 9010 Pure White internally and RAL 9011 Graphite Black externally. Eventually the rest of the windows will be updated to 9011 as and when we win the lottery. Having that white UPVC window next to my new favourite door is all kinds of wrong. So i’ll edit it out now for the next photo.

That’s better. Just mind the step (or lack of), it’s on the list of jobs!

Our new sliding door is one of the million jobs we’re currently rattling through in an attempt to improve our outdoor space. I’ll be going into more detail about our plans for that very soon. But needless to say, black will feature rather heavily in our garden (front and back), new driveway and new front door too.

I can honestly say, just updating this door, which has given us that 20cm of extra usable floorspace (along with throwing in twice as much light as its plastic predecessor) has made this space feel so much bigger, much more useable and the perfect place for me to sit when tiddles has commandeered the living room over the weekend. I’m so happy with how it’s turned out. Now time to tackle the outdoor space!

Do you have a similar project in mind at home? And what do you think of what we’ve done so far?