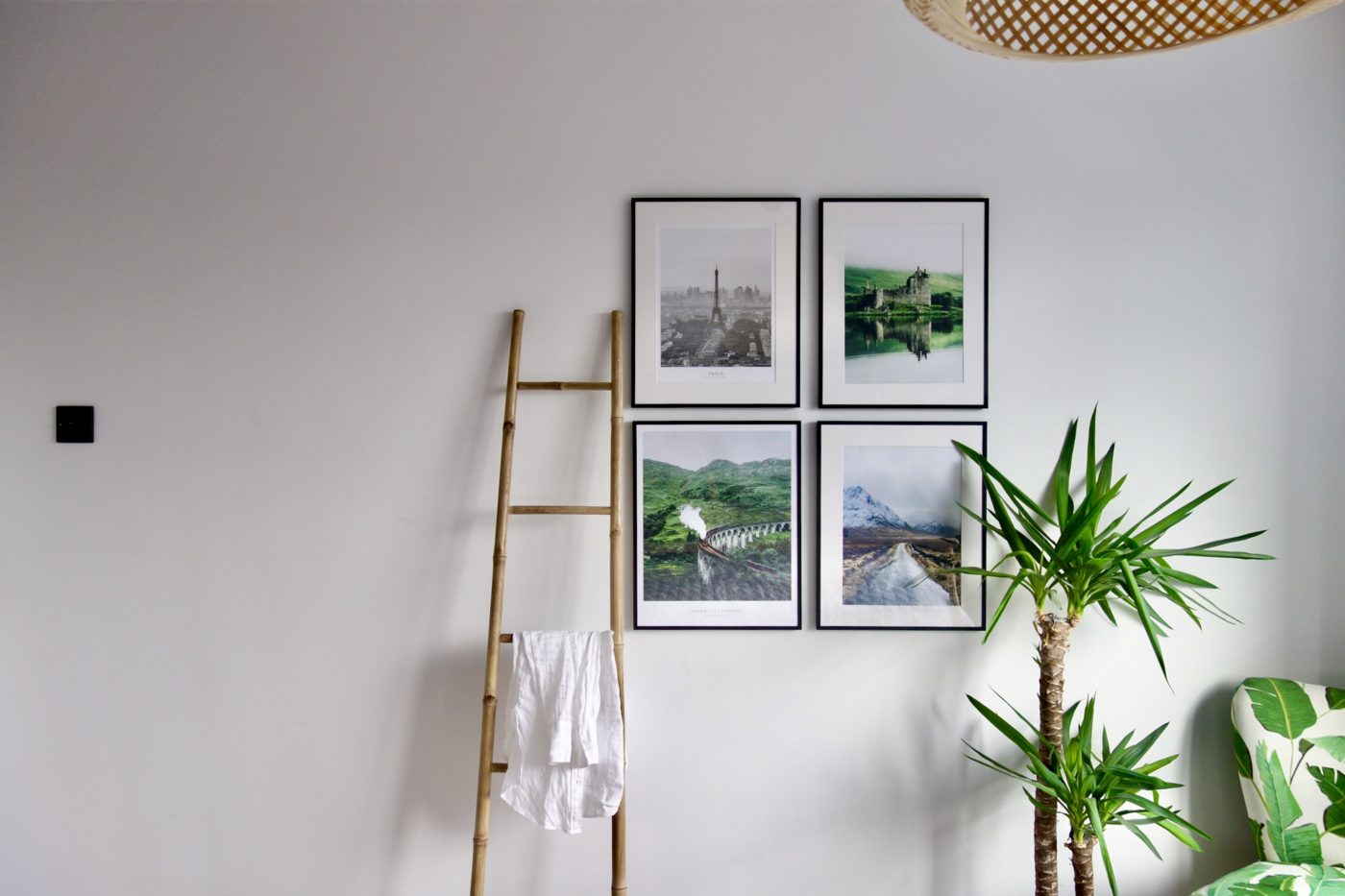 Well it’s been a while since I’ve written about this project. The two bedroom, 70’s apartment was introduced over ‘ere back in July ’19. You can read the intro to it here where there are all the before photos and the floor plan. Since July last year, there has been A LOT of work going on behind the scenes; A new kitchen, new bathroom, two bedrooms, a large open-plan living space and long hallway all redesigned, refurbed, decorated and furnished. Today we’re focusing on the final reveal of the Green Guest Room.

When I first met the homeowner, let’s call him Mr J, he had very fixed ideas about what he wanted to do with each room. Initially I was only booked for a colour consultation and all I knew was that he wanted this room to be green. He’d already bought the paint (turned out to be the wrong green) and was set on having a feature wall in this room. As the decorators were actually already on site on my very first visit, I didn’t really have a lot of time to explore a colour palette or develop a whole design concept, so we stuck with green but spent some time selecting the “right” green for this space.

As touched upon in this project’s intro post, a lot of green can appear teal in the UK because of the amount of blue light we get, what with us being located in the northern hemisphere n’ all. To make sure a green appears green, it’s good to select a green with yellow undertones, no hint of blue. Yellow sits directly opposite blue on the colour wheel, so works hard to absorb any of that blue light, giving a pure green hue.

The bed, besides and pendant are some of the most cost effective, yet design savvy pieces from Ikea right now. A solid wood, king sized four poster bed for £250, solid birch bedsides with leather pulls for £70 a pop and a mahousive pendant light deigned by Ilse Crawford for Ikea for £40. That’s a bed, bedsides and a beautiful pendant light for less than £450!!

Oh and did I mention the 100% cotton bedding set from Matalan for £40!? Texture, texture and more texture!

This is the bigger of the two bedrooms in the flat, but this room is also adjacent to the original 1970’s lift (it’s behind that wall left of the wardrobe). And it’s loud. Not a gentle hum by any means. In fact, someone used the lift when I was in this room taking these pics and I nearly pooped my pants. Hence this room being the guest room (master bedroom will be following shortly in another blog post).

The Liana wardrobe from MADE was this room’s biggest splurge at £699. But it sure does look pretty and breaks the norm of a big, square wardrobe shaped box . The soft curved solid ash and rattan doors only add to the room’s textures, along with the loop carpet which was supplied and fitted by John Lewis.

The room didn’t need a lot of storage or stuff, so it feels very calm in here. Lots of negative space with minimal, paired back styling.

At the foot of the bed we added a botanical inspired armchair creating a quiet reading corner by the window. A bamboo ladder was causally leant against the wall for guest towels/clothes and of course the gallery wall of landscape artwork gives the wall some focus.

Let’s talk about the artwork* shall we?

I didn’t select any of these pieces. To be honest, they’re not really my bag, but as with all projects, Mr J has to have the final say on what does and what doesn’t make it into a room. I can put my case forward for certain pieces and explain my reasons why one thing would work better than another, but in the end, it’s his money and his flat. Not mine. It’s my job to make it work somehow (and not have a tantrum when I don’t get my own way – always the hard bit).

*Yes I know, I know. I really need to get a mount for the bottom left piece.

I would have preferred one LARGE portrait piece here, something you could see and appreciate when lying in bed. So to create the illusion of a super sized piece of art, I gathered the many smaller pieces Mr J had purchased, framed them in the same frames and hung them in a gallery grid.

So that’s the full tour of the Green Room. All done on a budget using high street and online stores you all know and love, with nearly everything from either Ikea, MADE.COM and John Lewis. As ever, I always love hearing what you guys think of the latest reveal. More to come from this project very soon!