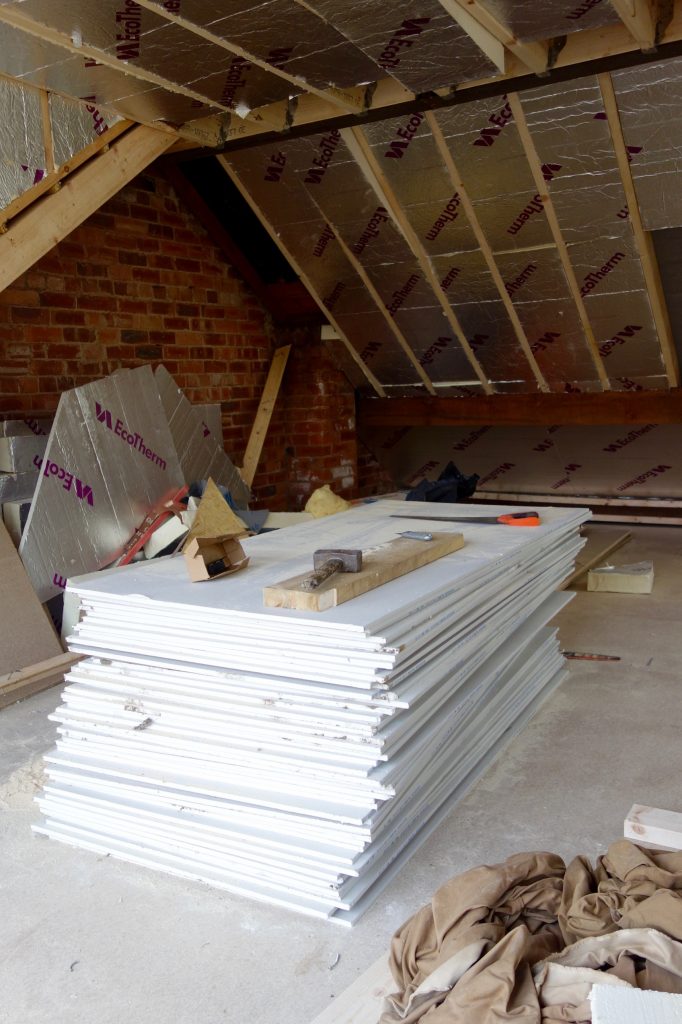 Firstly, i’d just like to apologise for the radio silence over the last week. I think it’s fair to say, this loft conversion is starting to get to me. Like, properly. It’s not the mess, dirt, cold, the fact I can’t walk down the hall without banging my knee on a boxed toilet or the plastic floor covering that crackles when you trot over it. No, not these things.

It’s the fact I can’t actually sit down for more than 10 minutes at a time and concentrate on ANYTHING as our front door is moving continuously with various trades coming in and out. I’ve never made so many cups of tea. I’ve also never got through so many bags of sugar. They’re all “two sugar” guys. Two!

The other thing my busy mind is struggling with, is the continual trouble shooting. Overall, i’m a negative, pessimistic person. I focus entirely on worst case scenarios which makes me really good at project management.

How does that help?

I combat anything that might go wrong before it actually does by trying to put something in place for every eventuality. Control. Freak. Yep. “Prevention is cheaper than the cure” and all that jazz. But this means you work sooo much harder than you actually have to sometimes.

Bathroom vent needed moving after being positioned wrongly. The same day I forced myself to take a day off  as I was feeling a bit ropey. **sigh**

I shouldn’t be PM’ing this project at all, we’re paying for someone else to do that. But…. they’re not me. And I don’t trust ’em. With good reason though at this point, because a couple of things have slipped through the net when i’ve forced myself not to take over. Or ya know, when i’ve had to actually had to go out to work. So at this point, i’m the unofficial project manager. Otherwise things aint going to work out as planned. And to us, it’s really important it does go to plan, especially given the hours we’ve put into the planning. It’s our home. It’s my job. And the added pressure is, it’s online for all to see. No hiding here peeps.

The windows we ordered were fitted last week. All good. They’re great and they make the space. The rest of the dormer was tiled this week but needs sorting above the windows as you can actually see them from the inside. One for the snagging list.

Our Velux window went in yesterday which made a massive difference to the light levels up there. I wanted to go a size up but the hubbster reigned me in. No fun.

I think once the landing space has the flooring down, been boarded and skimmed and the additional storage built in, the window size will make more sense. We shall see who was right in due course.

It’s me btw, we should have gone bigger.

The bedroom floor is down and stud work up for the wall between our landing, bathroom and bedroom. Our first fix wiring is getting done as I type so we’ve now located the lights, switches and sockets. Oh and the joiner has just arrived to make a start on the pocket door into our bathroom.

The one we decided last week to add to the bathroom.

The space is so tight in there we’ve reclaimed 80cm square of floor space by having the door slide into the wall. It’s cost us about an extra £300 but it will mean the door won’t swing onto the radiator and allows us to step out of the shower onto a bathmat. Simple pleasures. Worth every penny in my opinion. Hopefully our joiner will be able to fit it ok.

We were due the staircase last week. I think you can see from this pic, that we don’t have it yet. It’s taken longer than expected to make…. which means I’ve become a ladder ninja over the last fortnight. Up and down like lightning I am. You’d be impressed.

So, to end this week’s instalment of life at Making Spaces HQ, i’ll show you some more items that have been delivered since my last post.

Enormous Afghan rug for the bedroom

It’s like Christmas up in here. So many boxes of goodies but we can’t open em yet. Eeee!

Thanks for letting me share all this stuff with you on here. It actually really helps to exorcise some of these building work demons i’m fighting. It’s probably really useful for people out there too, the ones that are thinking of having building work done at home. It also means I don’t have to relay everything to my folks who are eagerly awaiting updates at all times **waves**.

Right, it’s time to make a round of brews. No rest for the wicked. Have a lovely bonfire weekend one and all.