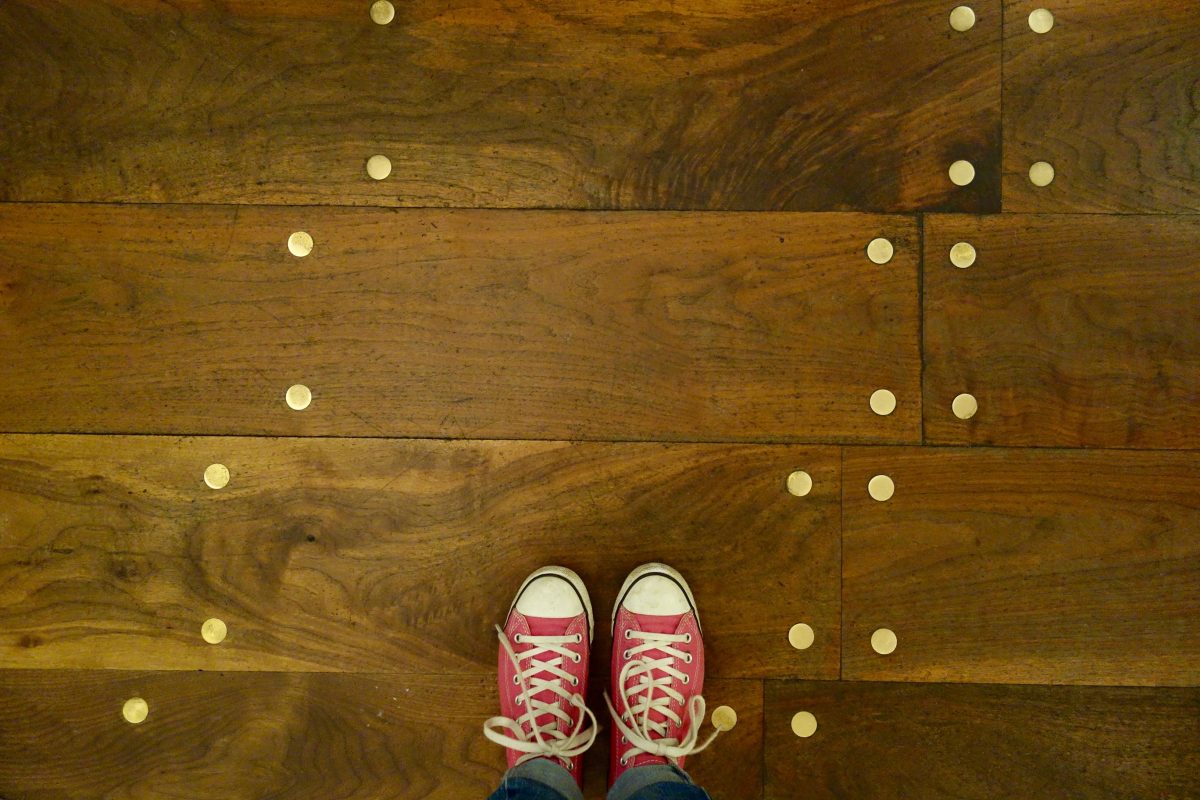 I wasn’t planning on writing a post about our honeymoon. I mean, it’s not really any of your business now is it? But I couldn’t not go on a little bit about how deliciously handsome our hotel was. Especially seeing as I have more photos of the hotel than anything else.

“Amid the iconic gold and brass of Wall Street NYC, you’ll find leather and bone of an Aspen country house, by star designer Jim Walrod.”

Not only named after its location on Gold Street within the Financial District of Manhattan, Gild Hall opened just before the financial bubble burst on Wall Street which is only a few blocks away. Gild Hall is located in a tall brick building formerly occupied by a Holiday Inn. Not that you’d ever guess when entering the two-story reception. You’re immediately hit with some gasp-worthy design, including an antler chandelier, animal hide rugs, mid-century leather furniture and dark wooden walls lined with vintage photography and books galore.

A reflection into the lobby. And my husbandado waiting patiently whilst i’m faffing about with my camera.

Into the bar and restaurant.

As you can imagine we spent several hours here most evenings just winding down after 12,000 steps around the big city. It was just right; the music, food, wine list, service, but the decor was just exceptional. It truly did feel like a treat to be there.

Me, not winning (different to losing) at Chess. And taking full advantage of Happy Hour.

The hallway leading to our room was all kinds of amazing and quite obviously a tribute to The Overlook Hotel from The Shining, which happens to be one of my all time favourite films. I immediately wanted a tricycle to ride down the artwork lined hall. #redrum

Our bedroom was a King Deluxe. Size wise, the room was generous for Manhattan. There would have been even more floor space had the bed (which was hands down the MOST comfortable bed i’ve ever slept on. And I did sleep. Really well.  If you know me then you will know I have a long tainted history of not sleeping when i’m away. I’ve gotten worse with age. I need total blackout, silence, the right mattress, high thread count bedding, light down duvet, non-feather pillows and about two hours to switch my brain off…) been a normal size.

The bed was enormous, easily big enough to sleep three. Which brings me onto the straps on both sides of the headboard. At this point I did wonder if it was a #sexhotel. Then we found these next to the Pringles.

I suddenly turned very British, blushing a little at this point.

It had everything you could have expected. Good lighting. Double walk in shower. Daily clean towels. Although (my one and only gripe) you can always tell when a bloke has planned the shower can’t you, there was only one shower head which was fixed. No separate hand-held shower head.

Us gals like a hand-held shower head. And i’ll tell you for why…. Sometimes we want a shower and NOT get our hair wet. More importantly, we like to shower down our nether regions. We can’t do that with a fixed shower head 2m from the ground. Never mind how many drinks we’ve had or how long we’ve been doing that Jane Fonda workout.

Actually I did have a second gripe about the shower, the control valve was around the corner, so you had to walk inside to turn the shower on. You had a choice: A wet arm OR a bit of a cold shower before your hot shower. Hmmm…. which one?

Bathroom fitters, just put the control valves opposite the entrance will ya? I don’t want a soggy arm. I’ll obviously be sure to pass on my shower feedback to the designer himself, i’m sure he’s refreshing his emails right now….

Born in 1968 in Jersey City, Jim Walrod, is a self-taught interior designer. Considered an expert in the field of mid century design, Beastie Boys’, Mike D christened him “the furniture pimp”. Mike D speaks the truth, the furniture at Gild Hall was pretty spesh. I made lots of ooh noises over the chairs in particular. And of course the leather rhino footstool/seat was all kinds of necessary.

A bit more about Jim;

“He began his creative career at Fiorucci in the mid-80s, and moved on to open a series of influential furniture stores, including Form and Function, with partners Jack Feldman and Fred Schneider of the B-52s.  From there, Walrod has made a career of applying his appreciation and knowledge of furniture and design into the creation of unique commercial and residential  spaces.  He is considered an expert in the field of 20th and 21st century design and architecture.”

If you’d like a proper nosey around the design of Gild Hall, click on this 3D tour below.

I’ve taken loads of design inspiration from our stay at Gild Hall. Really glad we booked this spot on Gold Street. It made our honeymoon.

You like? Would love to hear about places you’ve stayed on your travels, places that just made your holiday. Let me know where we need to stay on our next trip away (in 2022 when we’ve finally paid off our loft extension).