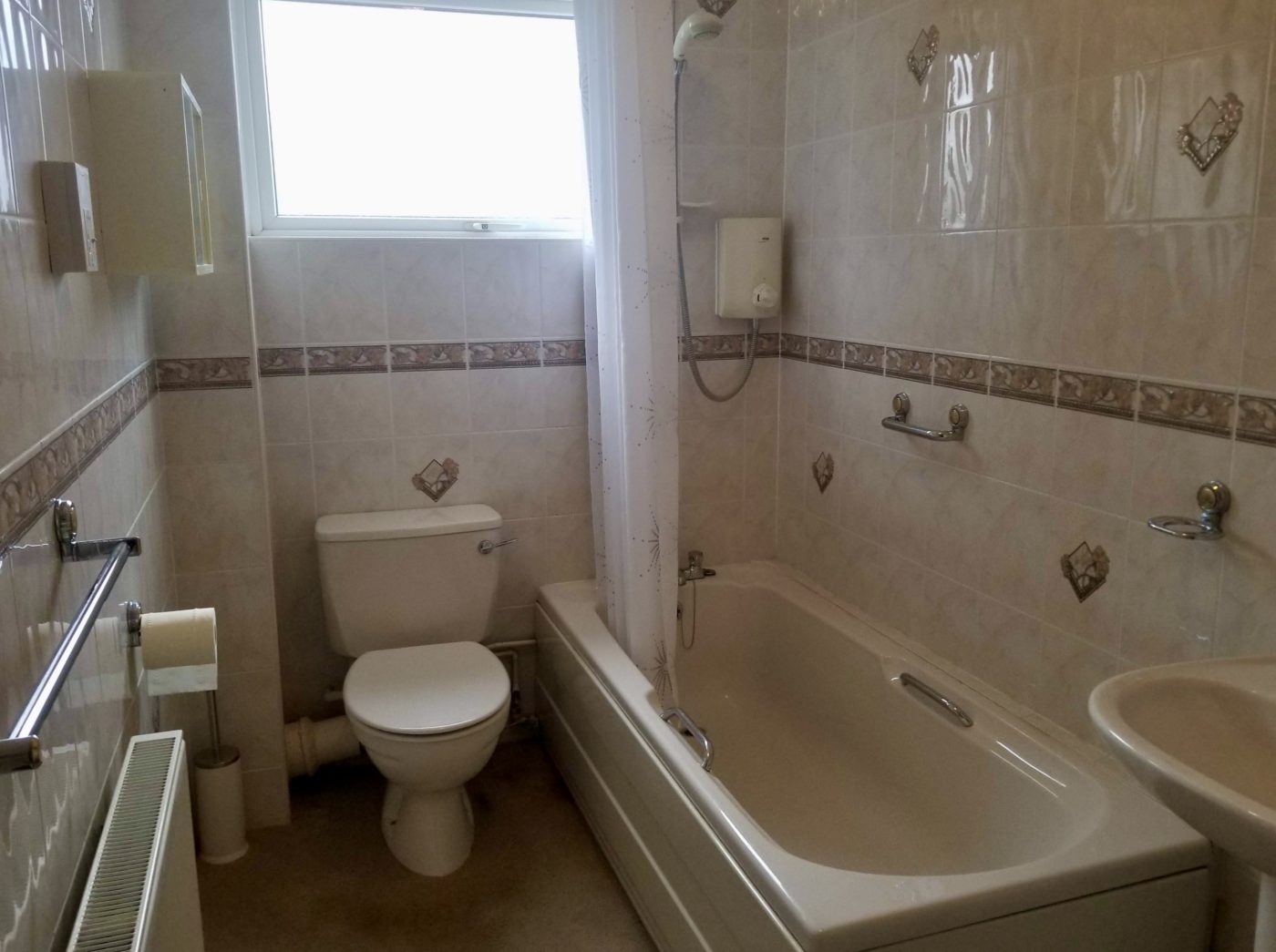 Hello hello! From kitchens to bathrooms, today i’m back with another final reveal post from the 70’s flat. This time it’s the marble and black bathroom, and thankfully despite bathrooms always being the most difficult spaces to design, plan and implement, this room (unlike the kitchen) went swimmingly.

As this bathroom is in a flat, things like relocating the foul pipe onto another external wall or altering the size and shape of windows were not allowed. Basically anything that affected the external appearance of the building as a whole was a big fat no. We also couldn’t move or take out any internal walls within the flat, which was pretty frustrating as the bathroom housed a huge, floor to ceiling cupboard which took up about a 1/6th of the floor space.

We did however, relocate the washing machine (originally in the kitchen) and added a drying space into the massive cupboard, meaning the flat never needed an airer setting up in the spare room. The classic guest-bedroom laundry move i’m sure you’ll all have succumbed to at some point.

Anyhoo, after chatting with Mr J about how he used his bathroom (did he ever have a bath or just shower?) it was clear that the bath was obsolete and actually a large walk in shower would be a better use of this tiny space. I don’t buy into the designing a room “just incase you sell” in X number of years. If you don’t want a bath, don’t have one. Baths are massive and a waste of space and money if you don’t use it. And guess what guys? If the future new owner wants a bath in their bathroom, they can put one back in. Simples.

When planning a bathroom, the position of the loo is the problem to solve first. There will be places it can go fairly easily and others where it’s a lot more tricky. It’s always easiest to position the loo on an external wall (as above) so the waste pipe can run right outside. But that’s where I also wanted the shower to go, like so:

This really was the best position for the new shower, but it created several logistical issues with the fixed toilet waste. The waste still needed to exit where it sat beforehand, so we had to plan around some tricky boxing in and a step into the shower to hide the waste and plumbing underneath.

It’s sometimes possible to sink all of this pipework beneath the floorboards, but because of the age of the building and the limitations on internal alterations, this was the only work around.

Once we’d worked out the feasibility of moving the loo, we moved onto the design, overall feel and finishes. Mr J, the homeowner had a clear idea of what he wanted. I tried to steer him towards a light grey, Scandi, geometric tile (given the era of the flat) but he was set on marble. Marble and black to be precise.

And so it was…

And drawing of all the individual pieces to scale:

After everything was checked, checked and checked again, it was time to start ordering the shopping list which is handily listed here for you:

Once everything had arrived (and made it up two flights of stairs) it was time to get started….  First, rip out the old bathroom and get started on the new layout with first fix plumbing and electrics.

Here’s the room, ready for tiling:

Hopefully the video gives you an idea of the compactness of the space we were working in, with this next photo being a great example of why bathroom refurbs need plenty of space outside for prep and planning.

Furniture in and getting ready for second fix

And here’s how it looked once complete:

It’s a bit different isn’t it!?

How to make a ridiculously small space feel bigger? That’s right! Fit a huge ass mirror. As soon as this went in, visually, the room doubled in size. And yes, there was a demister pad fitted behind the mirror too, so no fear of “steamy windows”.

A combined cabinet wouldn’t have been my first choice design wise (I would have loved to have had something bespoke made), but due to an already stretched budget, I needed to source something off the peg to house the cistern, water pipes and hide the waste pipe that ran around the right hand corner all the way to the back of the new toilet. Finding a combined vanity within budget that was exactly 1400 wide (not white gloss) was not an easy task, I tell thee.

Mr J admitted he wasn’t big on cleaning, so anything freestanding would have become a dust-trap. A fully fitted piece of furniture was definitely the way to go for this space. Less cleaning and not a waste pipe or bit of pumbing to be seen!

The beautiful IP rated, Bernadotte Double Wall Lights by Old School Electric add a soft light to to this corner tucked behind the boxing in. And obviously, they look bloomin’ lovely whether on or off.

The Carrara White Marble effect tiles from Total Tiles continue throughout the whole bathroom, adding a real sense of luxury to the smallest room in the flat.

When I come back to show you the hallway, this flooring will make more sense. The tiles continue straight down the hallway for another six or so metres, all laid on a diagonal to help give a greater sense of width to this narrow space.

A quick peek at the hallway showing how the flooring and colour scheme continues straight through to the shower room. More on the hallway soon.

The boxing in for the poop pipe did need to be higher than the height of the shower tray, but it didn’t need to be this high (450mm above the shower tray) so you might be wondering why it is. Couple of reasons really:

For those leg shavers out there, how annoying is it trying to shave your legs in a shower? Not in a shower over a bath, that’s the ideal set up, but shaving your legs in an actual shower enclosure is so frickin hard! You put the shower gel on your legs, try and balance on one leg and prop your other one up against some wet, slippy tiles, then gravity and water washes away the soapy lather so then you cut yourself as your leg inevitably slips down the wall. Brilliant.

The 450mm ledge is to replicate the edge of the bath. So for any leg shavers who may frequent this shower room in the future, you and your hairless, nick free legs can thank me later.

Ok one last thing – because I know someone will ask:

How much did it cost?

And i’m happy to answer this, mainly because everyone seems to think they can get a bathroom done for £5k. Including Mr J. £5-6k was the budget he had in his head for this room. And do you know what? It is possible to get a bathroom done for that, but not this one. The actual cost for this room was just over £10k. About £6k for labour and the rest on fixtures, fittings and furniture. Then of course there was me to pay for.

For those wanting to achieve a similar look, here are some places where you could look to save money:

And I did discuss each cost-saving option with Mr J so he could make these financial decisions fully armed. But he knew what he wanted and felt pushing his budget was worth doing to get the bathroom of his dreams. So he did. And has no regrets.

So that’s your lot for today. I hope you like what we did with the place. As always, I love hearing your thoughts (not the rude ones, obv, they kind of suck). I’ll leave you with just one more “before and after”…