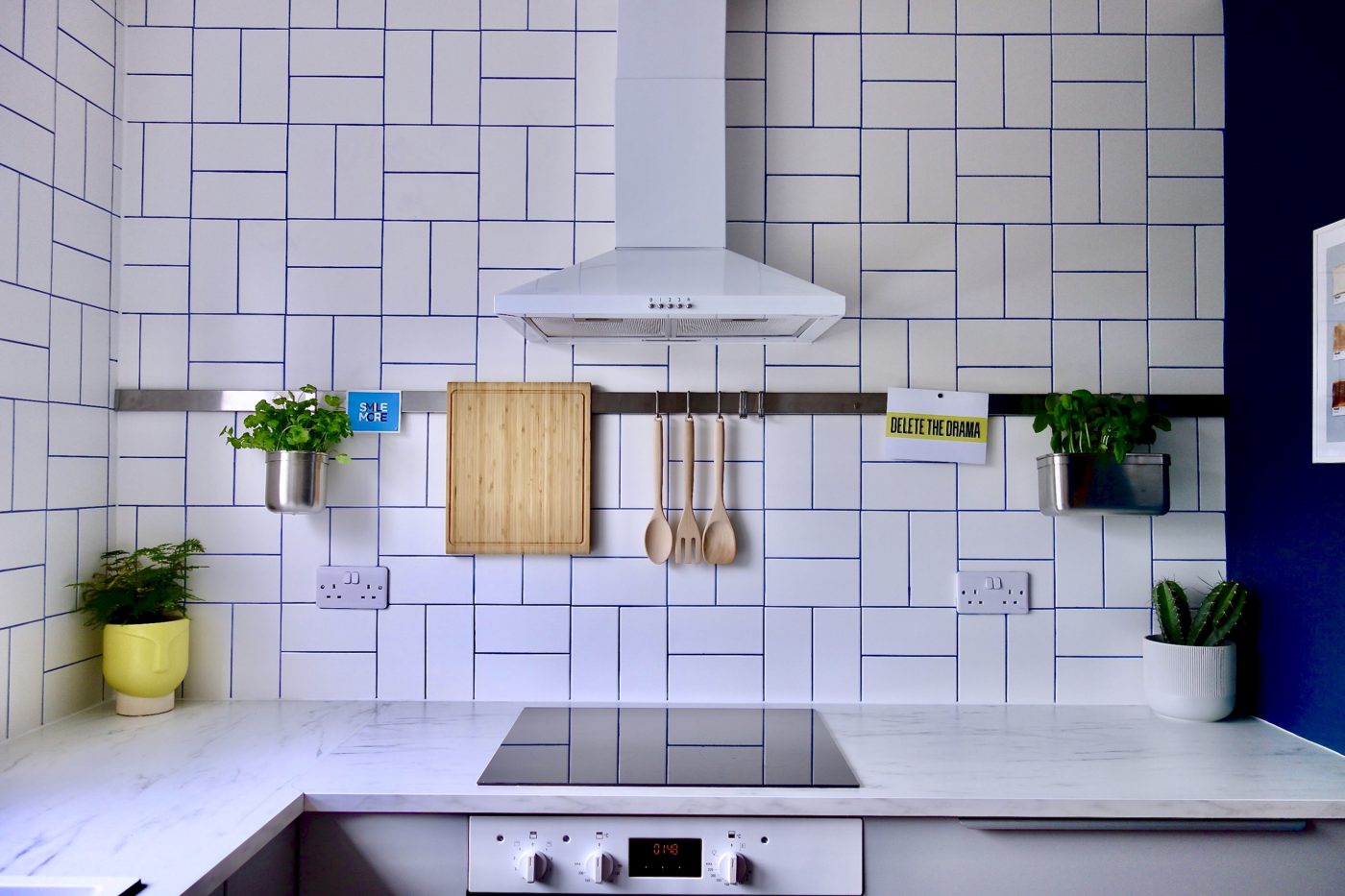 We’re back at the 70’s apartment this week for another final reveal – it’s the kitchen. An Ikea kitchen to be precise. Read on for before and after pics, a detailed breakdown of the what’s where’s and why’s… and the cherry on top, an Ikea Kitchen Review.

As you can see from the floor-plan the kitchen in this two bedroom apartment is  small. It leads straight off the large living space, so it was important the new design connected to the space around it.

The budget for ripping out and replacing with a new kitchen cabinets, worktop, appliances, flooring and tiling was £6k. This needed to cover labour too. It was tight, which limited where we could “shop”. After looking around at several kitchen options, we took a punt on Ikea as they offered the fitting and wrap around service of supply, build and fit.

The kitchen concept was based around the Ikea VEDDINGE range. Simple, light grey slab doors and drawer fronts. The small space meant the layout was pretty fixed in terms of which walls were going to be used for what. The design details came from the additional elements that were added to the room; tiles, flooring, tap and some cheeky styling.

The left hand side of the kitchen is where all the big items were positioned. The new boiler, pipework and that corner boxing in was all getting hidden behind a cabinet. Like so:

During kitchen fitting in July ’19

The washing machine was originally in the kitchen, but I suggested we replumb that into a large cupboard that sits in the bathroom. This freed up space for a dishwasher and an additional base cabinet. The fridge freezer was getting placed in the left hand corner leaving a small, tiled niche for the toaster, kettle and a little shelf for storing the more attractive kitchen bits and bobs.

It turned out pretty well, considering. And when I say “considering”, I’m referring to the Ikea fitting service. It wasn’t good. But we’ll come onto that soon. Let’s look at more nice pictures for now.

The tiling for this space was key. With the simplest (and cheapest) of white, matt, 20x10cm metro tiles, a basket weave layout and blue grout (yes you can get coloured grout) it’s added a brilliantly simple geometric design to the walls. I flipping love it!

Over at the other side, it’s a much more pared back vibe. Because we’d crammed more storage along the left hand wall, we needed less here. And less cabinets meant more tiling and styling 🙂

Excuse the wide angle lens, I hate photographing these tiny spaces. This was as good as I could get, which is making the grout look black. But it is blue, promise!

There you go – blue again!

Ok so let’s start talking about the problems shall we?

I recommended that Mr J (the homeowner) buy all of his appliances from Ikea to avoid any fitting issues and so that the delivery all came at once. These are the Ikea appliances I would have gone for:

White oven, white hob and white extractor. All with clean lines and no fussy handles or knobs.

Some of you might be wondering what my level of input was for this project, well it was to come up with the concept, advise on the finishes and offer support when needed. A lot of clients try and save money by not involving me every step of the process, which is fine n’ dandy. I totally understand that, especially when budgets are already squeezed. But sometimes, it only adds to mo money mo problems.

Mr J took the kitchen concept (with measurements and detailed layout) to Ikea where their kitchen design team tweaked the overall design to fit their exact cabinet configurations. He seemed to be happy with everything after his session with the kitchen team, so much so he’d ordered the kitchen and he was back in the driving seat.

However, Mr J went rogue, possibly because of budget, and ordered his appliances elsewhere. I didn’t know this until my next site visit where they were already either unboxed or fitted. This is where the problems began.

Let me explain. Ikea carcasses, just like their beds and other European sized furniture, don’t always fit UK stuff. Not without additional filler pieces. Ikea carcasses are much taller than their UK counterparts, meaning appliances have gaps you wouldn’t get with a UK kitchen. Ikea do sell the bits and bobs to square this circle, but the fitters, it seems, don’t always know what they’re supposed to do with them.

Where did that come from then….?

…..It’s most probably the bit lopped off the bottom of the dishwasher door. I kid you not.

Honestly – this was all a mystery to me as well. I did some digging and started to read about the dreaded Ikea dishwasher door issue. Because Ikea cabinet doors sit closer to the floor, it meant dishwasher doors jammed on the floor when opening. Like this:

The fitter’s solution? Just cut the bottom of the door off. True story.

Ikea do sell an attachment, which was ordered as part of the kitchen btw. It was sat in its packet, unused, as a reminder of the dishwasher door disaster. It’s a nifty sliding bracket that allows the attached door to move up and down against the dishwasher front upon opening and closing. But I can’t find it on the website at all, hence no link.

When you look online, there are oodles of forums, Twitter threads and suggested hacks for “Ikea Dishwasher Door” problems. So for those of you eyeing up an Ikea kitchen, just go armed with this info. Don’t let the fitter hack off the bottom of your door people. Buy the additional fitting and make sure they know what to do with it.

It took about five months to finally sort these and several other issues, after many failed attempts by the fitting team. Can I just reiterate, that’s five months to finish fitting a 7sqm kitchen. Mr J sent me his call record from his calls to the Ikea Kitchen team and it’s embarrassing.

Maybe you just had bad luck with your fitter?

Maybe we did. Ikea outsource all of their fitting to local contractors. The Leeds team didn’t do a great job. Perhaps other teams across the country do a sterling job and there are thousands of happy kitchen customers elsewhere?

Meanwhile down in Letchworth, my brother in law was also having an Ikea kitchen fitted…. I think you know where this is headed don’t you? Here’s what he has to say about his fitting experience:

“It was disappointing. We had issues with a corner cabinet that wasn’t anchored properly, doors didn’t close fully, the extractor pipe wasn’t fixed to anything, with 2m of additional hose just left sitting in a cupboard. I ended up sorting these issues myself.

Our worktops were improperly cut and repeatedly damaged, taking 18 weeks to rectify. There was just a general lack of skill and care.

It’s a shame as we’re we’re really happy with the Ikea kitchen, but we wouldn’t recommend using their fitting team to anyone. Ikea hold the fitting fee down, meaning they can’t afford to use the best people for the job.”

He ended by mentioning that they were compensated about £100 for the troubles they had. And used the phrase, “it was death by 1000 cuts” which I rather liked. Lots of small, faffy issues that could have easily been avoided by using slightly more skilled, capable people. The same situation as my client, Mr J.

In the end Ikea refunded Mr J about 25% of the fitting cost and he ended up paying a joiner to put right the wrongs and finally finish the kitchen. It was a painful process for sure. So much so I would not recommend using Ikea’s designated contractors to anyone.

Sorry Ikea, I love your products, but your some of your kitchen fitting teams seriously suck and your kitchen after service leaves a lot to be desired.

But we finally got there and the kitchen (despite me wanting to change the oven, hob, hood and sockets) is finished. Hoorah! With the tiling finally done, orange vinyl floor down and of course the orange tap, it looks pretty darn (yes I just said darn) cool.

The Ikea RIMFORSA rail and accessories add some interest and function to this large expanse of wall. The kitchen honestly feels twice the size now it’s not flanked with wall cabinets.

The entrance wall is painted in the same blue as the open plan living space, giving this room a direct connection which of course then continues with the blue grout.

So that’s been mine, Mr J’s and my brother in law’s experience with Ikea’s kitchen fitting service. I know they subcontract it out to smaller fitting companies, but really, some of their work is shockingly bad and I feel Ikea and you guys need to know this.

Oh and just to confirm, I was back on board for the tiling, floor fitting, shelving and rail. These additional jobs were all done with our own guys.

I’m sure there must be plenty of people who have had positive experiences with Ikea’s kitchen teams, alas Mr J wasn’t one of them. And whilst it would have been easier for me to just post shiny photos and make out it all went amazingly smoothly (and save myself a day’s writing), it didn’t.

But let’s end on a lovely photo of a natty little kitchen shall we? I hope you like what we did with the place. It certainly took some work to get it looking like this!