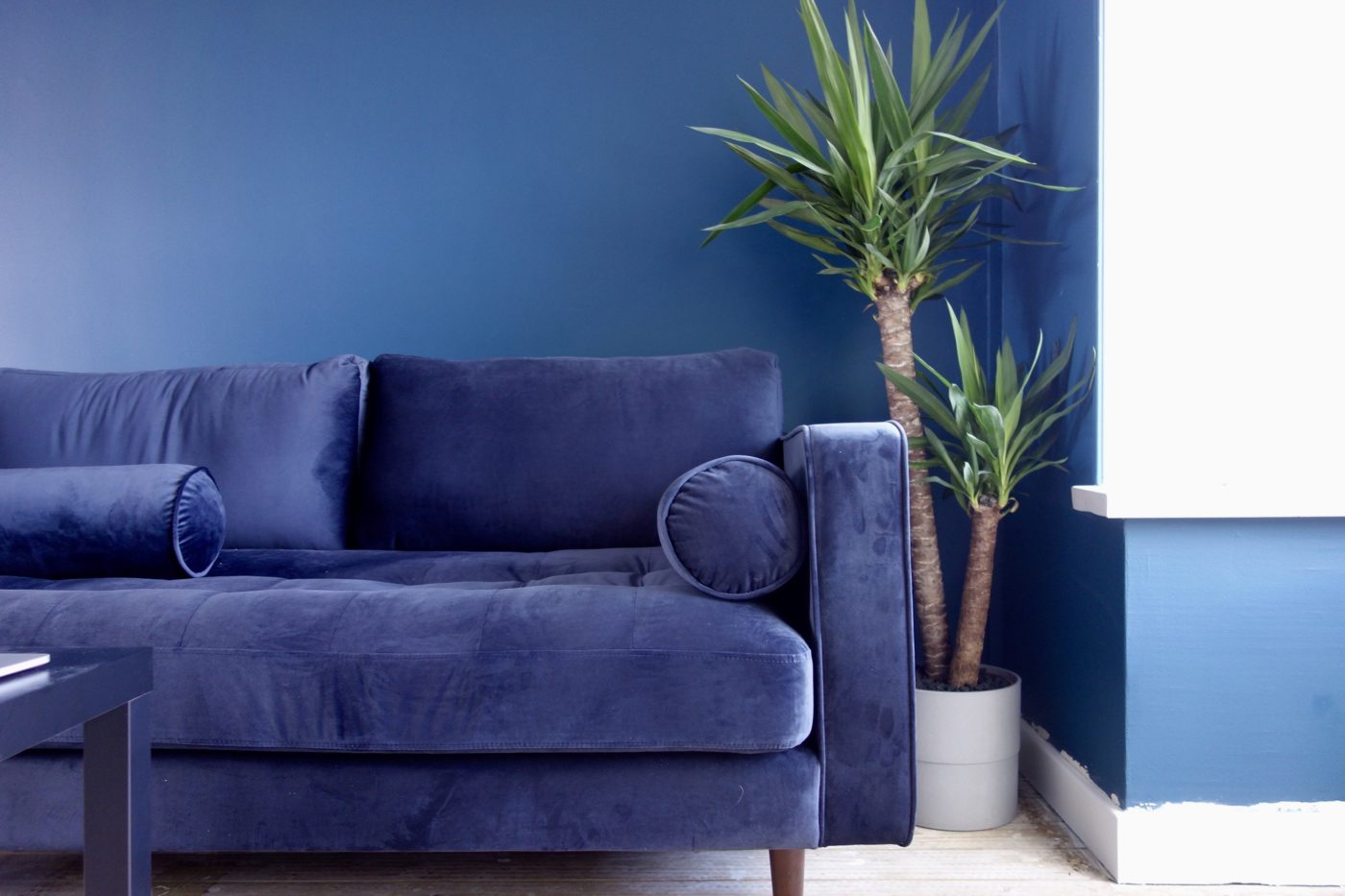 Another project, another two bedroom flat and another excitable homeowner who’s desperate to finish all the works by this time last week. Let me show you around this 70’s apartment.

The flat is a great size for this young professional. There’s a lovely long hallway with two good sized double bedrooms off to the side, at the end there’s a small but functional bathroom with large storage cupboard, and to the right the hallway leads into a large open-plan living space with small kitchen just off the dining area. In terms of any structural changes, there’s no scope due to the agreements and clauses in the leasehold (which sucks as I had some ripper ideas) but there’s certainly plenty of opportunities to turn this tired flat into a very cool new home.

I’m going to share the plans for each room so you can get a feel for the place. Let’s start with the open plan living space:

The homeowner moved in in February and started by getting everything ripped up and out. His aim is to get the whole flat completed for October (which I think is mental – tell him will you!) but I’m aiming for spring 2020. A year to completely rip out, refurb and reinstall a two bedroom flat when you’re working full time is pretty good going I’d say.

To try and keep costs down as much as possible and stay in budget, the pieces selected for all of the rooms are are from highstreet and online stores you’ll all know and love. Nothing fancy, nothing bespoke, just well considered design to give as much bang for your buck as possible.

Here’s the plan for the sitting space:

Despite the new homeowner having aspirations all things period property (panelling, grand sofas and the like) I’ve had to remind him to be realistic about what a 70’s flat can achieve. In a previous post, I wrote about scale and proportion and it’s a must read for those who struggle to put their finger on why something works (or doesn’t) in a space. More often or not you’ve chosen something where the scale is fighting with its surroundings. You should always try and work with what you have – be true to the building you’re renovating, this way the overall design will feel more cohesive and more importantly authentic. Trying to make a room or building do what it can’t can look blooming awful. There’s nothing worse than trying to make something be something it’s clearly not.

1970’s architecture was the era of open plan, any panelling was replaced with cladding, ceilings were the standard 2.4m so flush lighting was used a lot and architectural mouldings were minimised and what did remain were flattened and squared off to provide cleaner lines. I have a real soft spot for this era as I grew up in a 1970’s house and my first home was also a 70’s property. So I instinctively know what works in these spaces. Instead of turned legs, ornate detailing I steered my new client towards mid-century lines and vintage -esque furniture. Not only does it have a smaller footprint, which is exactly what this flat needed, it should also be able make it up the two flights of stairs into his flat. Always a bonus when you’ve paid for it – being able to get it into the room.

Despite having his eye on a very large, six seater dining table, I convinced him to opt for a simple circular four seater and paired it with these bauhaus inspired chairs:

I am so excited to see these in the space. They are very cool – that mustard corduroy fabric on that chrome tubular frame is just perfect for this 70’s pad. I was going to add the link to them, but they’ve since disappeared from the website. Soz.

There’s also a work space to add along that back wall to the right of the French doors – but that will be one of the last bits to sort. Tbc…

Onto the compact kitchen which is just off to the side of the dining area:

At approx 2x3m it has to work hard to get everything a modern day kitchen needs in there. One of the first suggestions I made was to take out the old huge boiler. It took up the whole left hand corner of the kitchen so that had to go. As did the washing machine. I suggested we replumb the washing machine into the massive bathroom storage cupboard on the other side of that left hand wall. Originally the old water tank was stored in there, but as we’d updated the boiler it could now be removed.

New boiler – all due to be boxed in behind a cabinet – fear not!

In a post I wrote a couple of years ago now about where to spend your money at home, the heating system is top of the list of things to update first in any home renovation project. Not only do you gain space but you also have a much more efficient and economical set up, where overtime it pays for itself. Bonus!

We are keeping this space simple and light with light grey cabinets and marble effect worktops from Ikea. The floor and walls is where i’ve added the designer details;

There isn’t the budget (or space) to play around with bespoke doors, brass handles, real marble worktops, or anything fancy, but I have added little quirky design touches for a bit of fun. I think it’s gona look smart.

There will be no wall cabinets on the right hand wall to give a greater sense of width as you enter.  The wall cabinets flanking either side of the room made it feel even smaller in there. Instead there’s just be a simple rail to add herb pots and some cool utensils against a full wall of tiles. Using coloured grout is one of the cheapest way of making a cheap white metro tile look a million dollars. And it literally costs no more than your standard grout. The blue echoes the rich blue walls of the living space and of course blue and orange are best friends (aka complimentary colours on the colour wheel – bit of colour theory for you there).

The boiler is behind this right hand wall cupboard, the left hand side is the fridge freezer and the central space is dedicated to tea and toast with a dishwasher underneath the kettle.

Now, moving onto the bedrooms:

This room is going to be a veritable feast for you botanical boho lovers out there. The crisp white walls against the rich green is such a calm and classic look and those textures of rattan from the wardrobe and pendant light add another strong 70’s reference.

The green wall is in Dulux 90GY 08/187 (easy for you to say) and is the perfect shade for the birch bed frame to pop right off. It’s a yellow based green (so no blue undertones) so it never looks teal like most greens do in photos. A very strong green – love it.

Onto what will be the master bedroom:

The homeowner already knew he wanted a smokey blue bedroom with brass accents. On my first visit there were approximately 32 samples painted onto the walls – all varying shades of blue. None of which were quite right.

After looking at lots of images online (one blue bedroom in particular) I convinced him that it was Dulux’s Denim Drift he was hankering after. Once the wall colour was nailed, the other elements of the room quickly followed suit.

The built in wardrobes need to stay as budget doesn’t allow new bespoke ones to be built. So I have suggested that we paint the louvered doors (so 70’s) in with the walls and add some brass knobs to tie in with the rest of the metallic detailing.

And finally, it’s onto the bathroom – the trickiest and most expensive room to refurb.

Most people underestimate how much it costs to renovate a bathroom. Which makes sense as we only tend to do them every 10-15 years or so, so keeping up to date with labour costs on top of everything else “bathroom” it can all be a little overwhelming. They’re definitely the most difficult spaces to plan for as they’re more often than not the smallest room. And smaller means fiddly. And fiddly means you need to find solutions. And finding clever solutions come at a cost.

Instead of the loo and bath being side by side at the end of the bathroom, there will now be a walk in shower with sliding doors across the back wall. The foul pipe needs boxing in all the way from the left hand corner around to the right hand wall where the loo will be repositioned. As much as I’d have loved to run the soil pipe straight outside, we couldn’t as it runs down, internally throughout the three floors of the building. Cue some clever boxing in.

The large storage cupboard to the right is now where the washing machine is plumbed in with the above space being used for bathroom storage. I would have loved to have knocked this cupboard out in order to gain some more space in this very small bathroom, but all of the walls are structural so alas, we’re not allowed. Booo.

I’m not going to list the shopping list for this room just yet as it’s still in progress design wise, but this is what we’re aiming for and the bathroom fitter says it’s all doable (so far). But we’re nearing the very end of the budget so there may well be some compromises to make in this space. Time will tell. Tbc in another blog post for sure.

So then, that’s another one of my projects that’s been bubbling away in the background and keeping me busy. I will of course be back soon with more updates as to how it’s all going. The kitchen is due to be fitted this Monday, fingers crossed it all goes swimmingly like all kitchen fits do (ahem).

As always, I’d love to hear what you think of our plans for this fab flat – am looking forward to posting updates again soon!