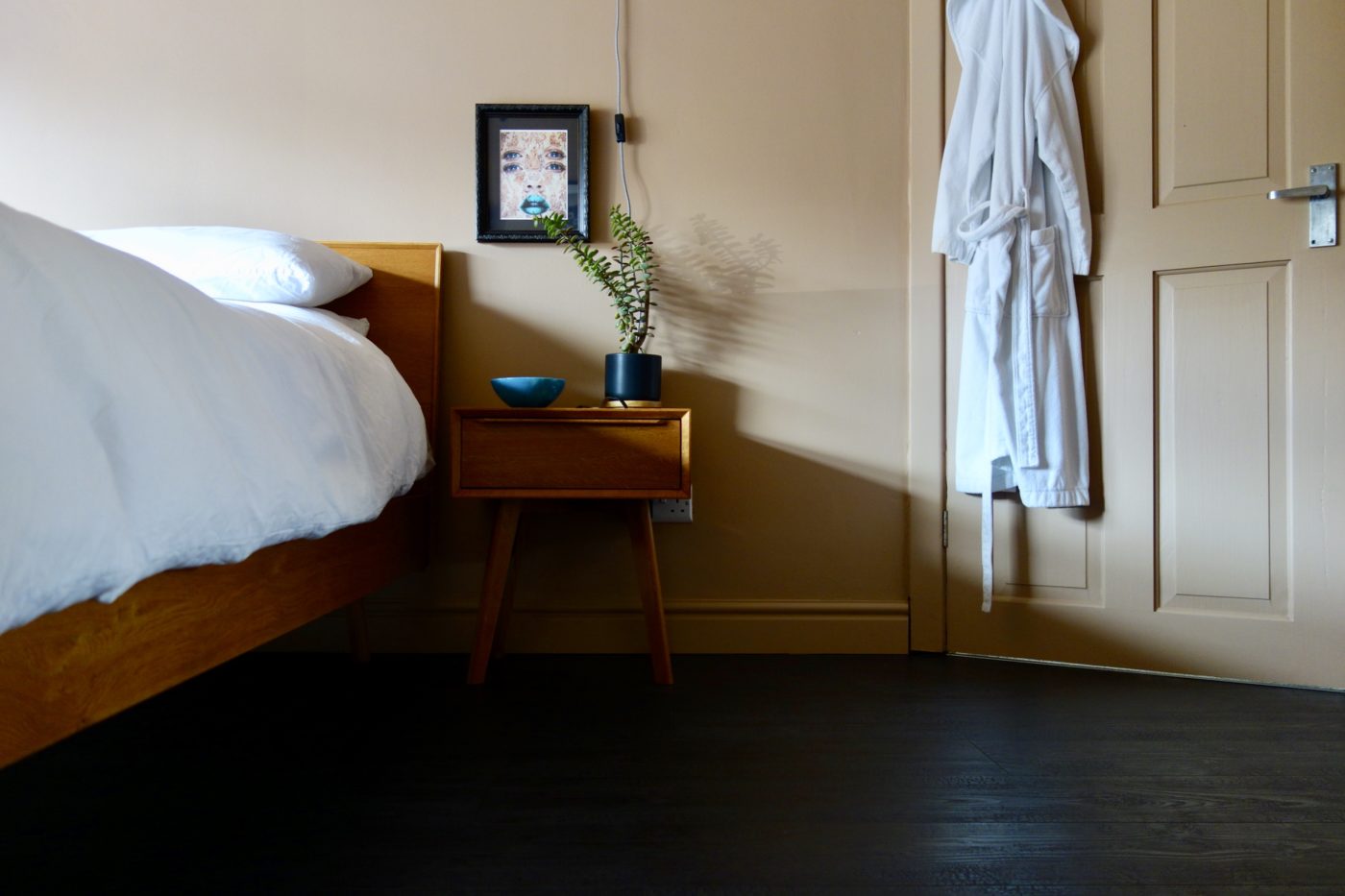 It’s been all go here at Making Spaces HQ with the makeover of our master bedroom. Last time I wrote about it, i’d just about finished all of the decorating. Remember?

In the grand scheme of things, the painting was by far the easiest bit to sort. I also kinda like that job, very therapeutic I find. Once that big job was done it was over to the hubster to crack on with taking up the oak flooring and lay our new Burned Planks flooring from Quick-Step.

The Quick-Step ‘Impressive’ range comes in 8mm or 12mm (Ultra) boards, where as the solid oak boards closer to 18mm. So, to give us a more consistent floor height over the bedroom threshold onto the landing, we opted for the 12mm boards, as well as leaving the old underlay down and using this as our sub floor. Fitting the new underlay was super easy to do (well it was for me, as I wasn’t doing it). We opted for the TransitSound underlay which seems to have disappeared from the Quick-Step website, but as you can probably guess, this particular underlay reduces sounds that can be transmitted to rooms below, guaranteeing 21dB of sound reduction.

Silent floors are a big selling point for me. Silence in general really. Once the underlay was down, it was time to work out how to lay the planks. There are a couple of reasons you should do this before you start plonking stuff down;

My live-in handyman, started with the most difficult section first (I would have left that bit til last and then it would have looked crap), cutting and fitting the planks that ran against the room’s diagonal entrance.

Once those three tricky cuts were done, it made it easier to fit this section as a one-er. Then it was simply a case of staggering the rest of the boards, making sure we used any offcuts where possible. Quick-Step also sent us a handy installation set, which didn’t look that life changing when it arrived, but actually, the ‘tapping block’ was a godsend.

It took hubby about 1.5 days to fully finish the floor and refit the skirting boards, which to be fair would have taken at least half the time if he was actually fitting the floor in an empty room. But like most people, we  didn’t have another space to house a full bedroom’s worth of stuff, so alongside fitting the new flooring, we had to manoeuvre a king-sized bed, mattress, radiator and chest of drawers.

The room isn’t 100% finished quite yet. Here’s what’s still to come:

But hopefully these next few photos will give you a good idea of how the new black flooring fits into this room’s new scheme and in with the house as a whole.

We’re both really happy with it, the grain markings and scorched effect give the bedroom floor a whole heap of texture. The boards are also water and scratch resistant, which is good news with a cat that likes to stand precariously on our bedsides to drink from our water glasses. The water resistant finish also makes it suitable for kitchens and even bathrooms too! A nice alternative to a tiled floor.

I can already tell how hard wearing the boards are as the floor laying was followed by an eight hour stint of flat-packing Ikea Pax wardrobes with a six year old that wanted to “help”. I know a lot of people turn their noses up at laminate, but actually these boards are super realistic, I’ve not seen a repeat in the wood grain pattern…. yet.

And that’s as much as you’re getting today everyone. Hopefully the final reveal of the bedroom make-over will land in the next month or so. In the meantime, what do you think of our new fancy flooring?

Many thanks to Quick-Step for gifting us the laminate flooring, underlay and installation kit for this project. All words, opinions and images are my own. I only ever work with brands I love and think you guys will love too.