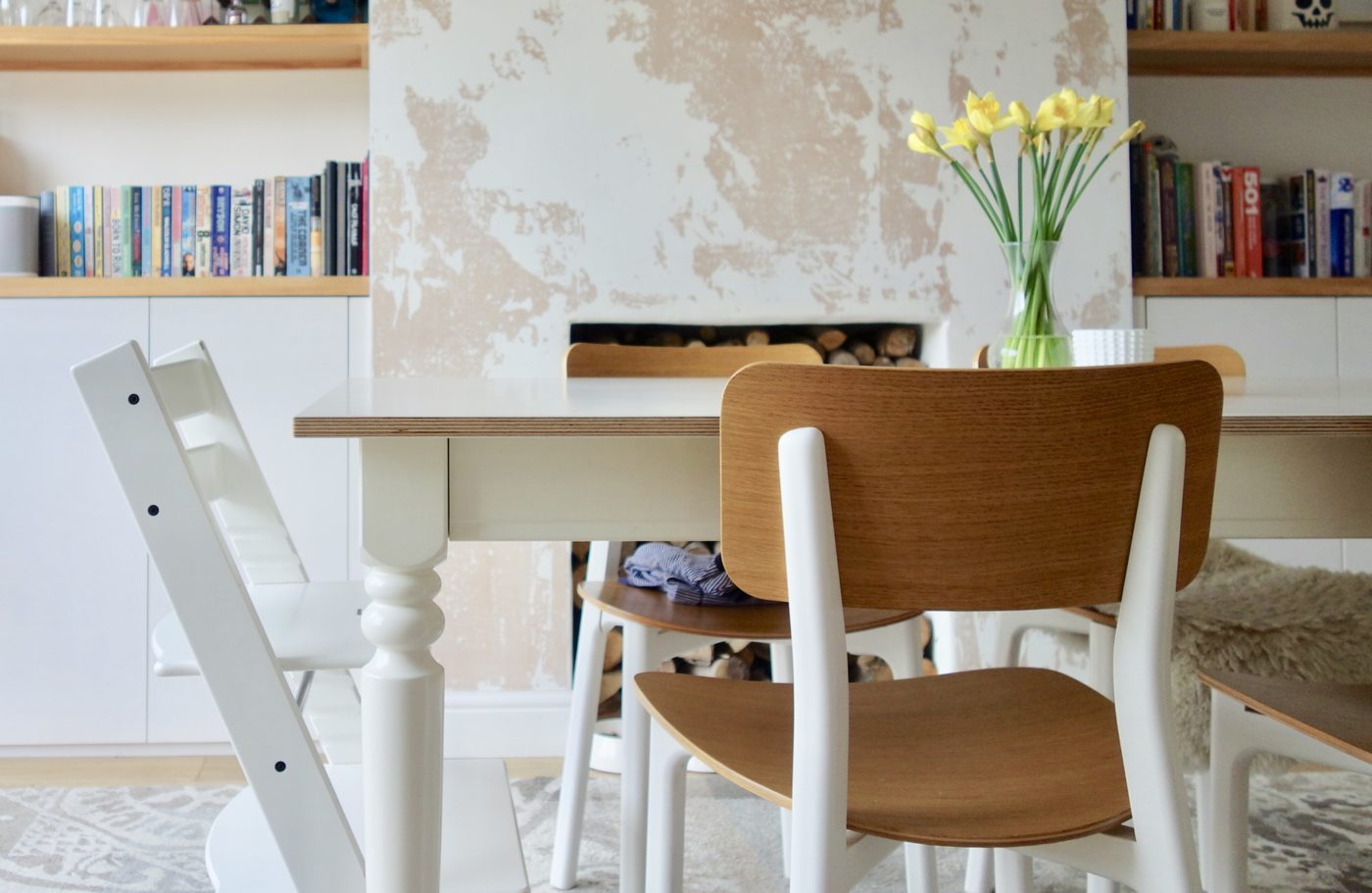 I’m sure you all know i’ve got a cat, she features quite a lot in my images. She makes an excellent alternative to a sheepskin and is most of the time, a more than willing styling prop. Her colouring also fits right in with our monochrome home. All in all she’s fabulous.

One thing that never fitted in our home was the cat litter box. We don’t have a cat-flap, so madam needs access to an indoor loo. When we had the loft converted back back at the end of 2016/17, I designed a space for her litter box to sit, accessible to the furry one, but out of sight from the rest of the house. I was looking forward to not seeing it as I went about my daily meanderings around the house. Alas, as our son is a very light sleeper, just like his mum, Chooch’s midnight races up and down the stairs woke Charlie up.

So we had to move Chooch’s overnight quarters to the confines of the kitchen/diner to contain any cat gymnastics, mews and random shadow chasing. Needless to say, that meant the expertly planned cat litter spot in our loft was left bare and the litter box brought down into the kitchen. A big purple cat toilet within kicking distance of the dining table. I tell tee, I was not happy.

It’s been on my list of things to sort for the past couple of years, but I just couldn’t work out where or how to put it. So I sat down and had a good think about where on earth I was going to add this cat loo. Our house isn’t big, I refer to it as modest and compared to some it’s pretty wee.

You can see here that in either alcove we’ve got shelving, an additional seating bench in one side and a play kitchen in the other. Hmmm…. Charlie’s six now and whilst the toy kitchen is brilliant for storing Play-Doh, pens and paper, he does’t play with the kitchen anymore which means there’s a lot of wasted space in that there alcove. It was time to say goodbye to the Duktig kitchen and build in more storage; a cabinet for Charlie’s ever expanding “Craft Box” (read – bits of old rubbish he pulls out of the bin) and a ‘poop cabinet’ for Chooch.

So I contacted my brill joiners at Bare Joinery and said,

“Hey there, wanna come and build me some cabinets, one of which is a cat loo?”

Obviously they jumped at the chance because who wouldn’t want to build cat facilities in someone’s kitchen? And in the blink of an eye (flipping months, because they’re so busy, partly because I keep recommending them to everyone) the newly configured alcoves look like this:

Chooch now has a sleek, white sprayed, birch ply cat facility that sits neatly beneath our existing shelves. And Charlie now has thee whole cabinets dedicated to his very own arts and crafts revival. William Morris would be happy. I’m also happy to not see a big plastic cat litter box in here anymore. Chooch is happy, Charlie is happy, i’m happy, even William Morris is happy. So much happiness!!

I decided to use the same material here for the door fronts as we used for the kitchen update we did last year? Remember this one?

And before you ask, yes, there’s a cat litter tray inside the cabinet, she doesn’t just relieve herself on a shelf. There’s also her cat food and bag of clean litter on the shelf above. It’s basically Chooch’s “In and Out” station. The third cabinet to the right is for shoes as we tend to accumulate them by the back door. I was getting fed up of them piling up there, so now there’s a shoe cabinet for ‘putting the bin bags out’ shoes. You know the ones.

Yeah I know. Me neither really, but ya know we have a small house and minus an extension this was the only place we could put it given Chooch’s midnight outbursts of song and dance.

Then i’d probably delete your number from my phone and not tell you about my cat litter cabinet ever again. Given the space situation, i’m super chuffed with how this has turned out. I can’t see us ever not having a cat to be honest, I think they’re wonderful creatures. Obviously, Chooch still hasn’t uttered a word of thanks for her new facilities, but she will…

So then, never thought i’d ever say these words, but, whaddya think of my new cat litter box?