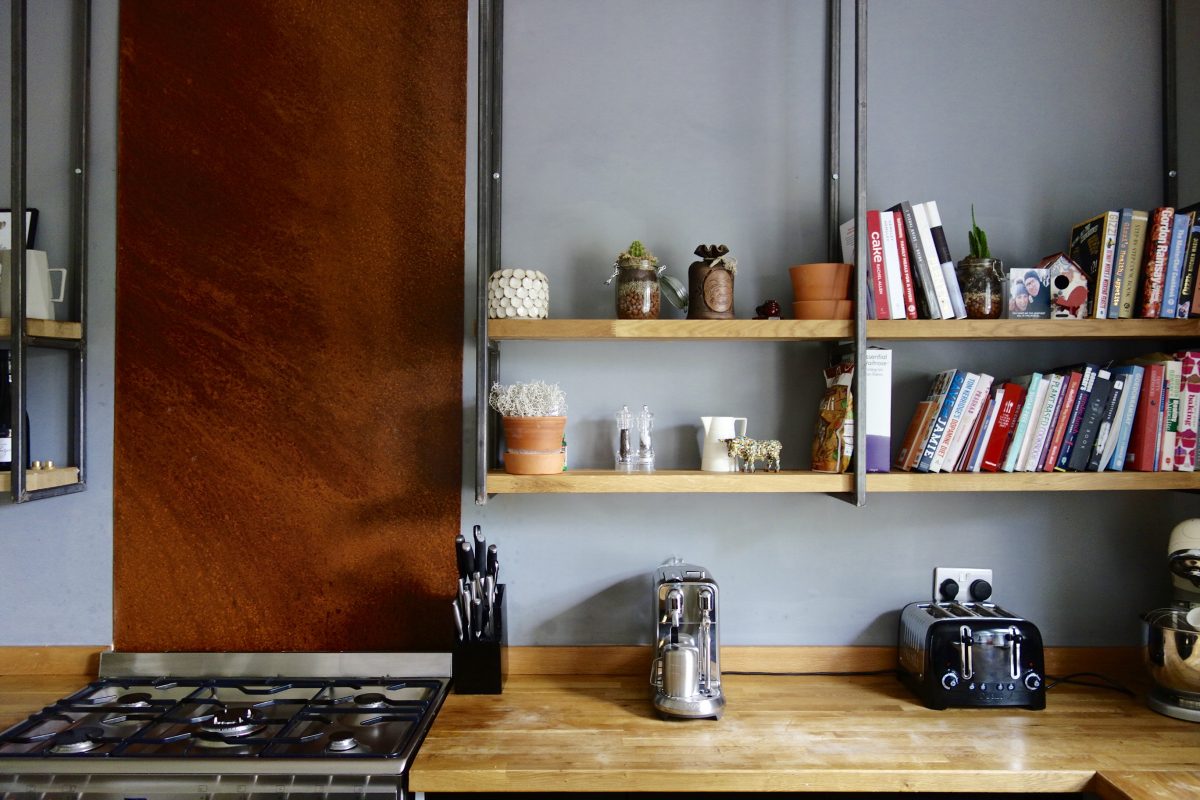 When the lovely Ally of Digital Diva fame, booked me for a day’s consultation last August at their new home, I walked into a house I wasn’t quite expecting. A stunning, Grade II listed, late Georgian, early Victorian stone built property, just three or so miles away from my own home in North Leeds.

This isn’t what it looked like, don’t worry. This is a photo from 2015 before it was bought by a developer. The whole place had been refurbed to a pretty good standard and whilst the developers retained the beautiful period features, some of the fixtures and fittings were not quite cutting it for the new owners, Ally and James.

This was their kitchen back in August 2016, with shaker style units, range cooker, large island unit, solid oak worktop, open shelving, original Yorkshire stone floor and built in pantry by the side of the restored fireplace. So all in all, the makings of a wonderful kitchen.

The layout was great. No issues with that. But these guys weren’t feeling the space and weren’t sure how to achieve the look they really wanted. Between the pair of them, they were going around in circles, so Ally contacted me for some help.

Within the initial two hour consultation, I’d made these suggestions:

Now, because I wasn’t project managing this one, only consulting (which means telling people what to do and getting paid for it), it took them a little while to get things moving. I very kindly  virtually prodded them from time to time asking how things were going.  The changes were slowly made over about six months or so and the difference is pretty awesome. Want to see what this room looks like now?

I love the large rusted panel behind the range cooker. That warm, rich patina is like a HUGE piece of art on the wall.

This was a DIY by James, who had a piece of mild steel cut to size for about £40. Then he preceded to “rust it up” with a mix of chemicals (vinegar, bleach….). There are several articles showing you how to do this online. This is one you might find useful. Once the rusting process was completed, it was clear sealed with water based varnish. Boom.

My suggestion for full height metal and wooden shelving was ran with so I measured and drew up the design. I wanted it in raw steel, running parallel with that full height splash-back. Oak block was used again for the shelves to soften the overall look and tie in with the worktop.

And the best bit about the shelving is, they re-used the original oak block shelves. Not only that, but James built and fitted the shelving himself. How cool is that? When having it priced up, it was coming in at just over £1k. So James set himself the task of learning to weld.

I’m not gonna lie, I thought he was insane. But turns out, I was wrong. There’s a very fine line between insanity and genius (so they say) and the whole thing turned out way better than I could have imagined.

I get such a massive kick out of seeing ideas in my head come to life. I’ve already told James he needs to start selling these shelves at Dowsing & Reynolds, the company he runs, which is where their lighting is from by the way.

Upon my first visit, I remember Ally being unsure about the lighting and James not really feeling the oak worktop. But these weren’t the problems I was seeing. Sometimes, changing the easy things are what we focus on, but deep down, if you don’t change/update the more difficult fundamental aspects of a space, those peripheral items will never be right. Always focus on the real issue in any room.

Even if it’s a real pain in the arse to sort….

It cost about £500 to get these cabinet doors and panels re-sprayed black. Which is probably less than 1/10th the cost of a new kitchen. And the brass handles were of course from Dowsing & Reynolds too.

Along with the paint for the back wall, which is in Dowsing & Reynolds’, ‘Might Rain Not Sure.’

I sourced a large (120cm diameter), Crittall style mirror from Rocket St George for the chimney breast to help bounce the light around whilst adding some industrial detailing to this side of the room. The vertical lines echoing the full height, shelving.

So then, what do you think of the changes? It’s made quite a difference hasn’t it? This really does go to prove that small changes and creative design, can make a huge impact. Get the bones of the room right and everything else will fall into place. Here be the proof:

I’d love to hear what you guys think. I’ll no doubt be sharing more of this place in the not too distant future, as i’m just about to start working on their living room. Yup yup.