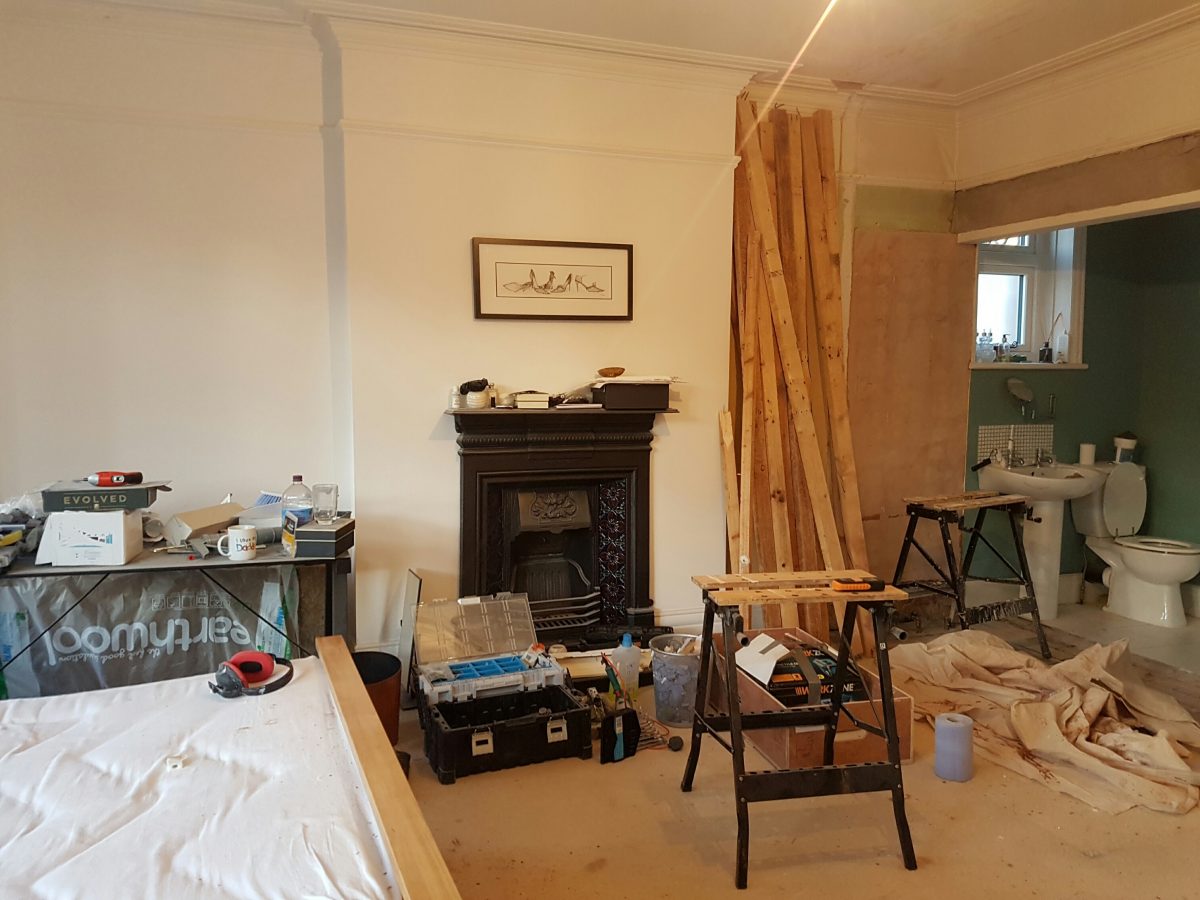 After a well deserved week off from all things blog, i’ve caught up with things like cleaning the house, finishing off oodles of painting at home, having conversations with my husband about things that weren’t loft related and washing my hair. Feels so good to have our home back. And a teency bit of normal life, whatever that means.

So now felt about the right time to introduce a new project i’ve been working on since December. Yes, another one. If you guys remember the Drawing Room project, then you’ll know why i’m excited to introduce it…

… as it’s the bedroom above this very room. So you already know these guys are going to be up for something pretty special in their “soon to be” new guest bedroom.

Here’s is the room before these guys moved in. In fact, these are the estate agent piccies…

It’s a very masculine room isn’t it? It had a weird layout too as the bed was up against the beautiful bay window. And there was an additional alcove where fitted wardrobes were once built in.

On the other side of the room, a section of the room had been stolen in order to make a bathroom in the space next door which really upset the symmetry around the fireplace. Big no no.

The homeowner taking that wall right down

It was clear that wall needed to go and these guys didn’t mess about. Goodbye offensive wall!

With period properties, altering the layout of any rooms needs to be done sympathetically. Taking care to retain the beautiful features that make these houses so special. Luckily, most of the picture rail and coving was saved.

And here’s the room with the stud wall finally down. Instantly the room felt much more in proportion. A very spacious bedroom indeed.

The stud work for what would have been the original wall was rebuilt and boarded ready for skimming and joinery.

On the opposite side of the room, the built in fitted wardrobes were removed, the wall reinstated and doorway built into what would be the new ensuite (door casing and door still to come).

You can peek into the bathroom here which is actually very nearly finished. The bed will now sit against this wall, facing the beautiful, original cast iron fireplace across the room.

Another project on the horizon… This time a large Edwardian bedroom with beautiful bay window, original cast iron fire surround and stained glass window in the ensuite bathroom. It's going to be an immense room. Am very lucky indeed to be working here. The old carpet is ripped up and gone. Boards cleaned back and time for black paint. "Once you go black… you never go back."

So this happened… and man, did it get some serious love over on Instagram. It seems i’m not the only one that loves floorboards. Black ones too. Yep, we’re going black ladies and gents. In fact, let me show you what the plan is for this room.

“The design features brightly coloured kniphofia flowers, commonly known as torch lilies or red hot pokers. They were recorded by English Heritage as having been hand-painted and stuck over a pre-hung wall covering in a late-18th century Upper Brook Street house as a bespoke decoration.”

Very excited to be working with a mural style wallpaper, something i’ve not done before. If the budget can stretch, the plan is to use this wallpaper around most of the room. 75% of the room to be precise.

So what do you think about our plans for this room so far? Hit me, would love to hear your thoughts.