We did it! We have our new loft bedroom, all done and ready to rock. Four months after we started our build, i’m finally able to share the final reveal photos with you. I’m going to warn you right now, this post is PIC HEAVY. Initially I took about 70 photos. I know. That’s ridiculous. I’ve managed to whittle it down to about 30. Still far too many, but ya know what, just scroll along if any aren’t floating your boat.

Here’s where we were back in September 2016: 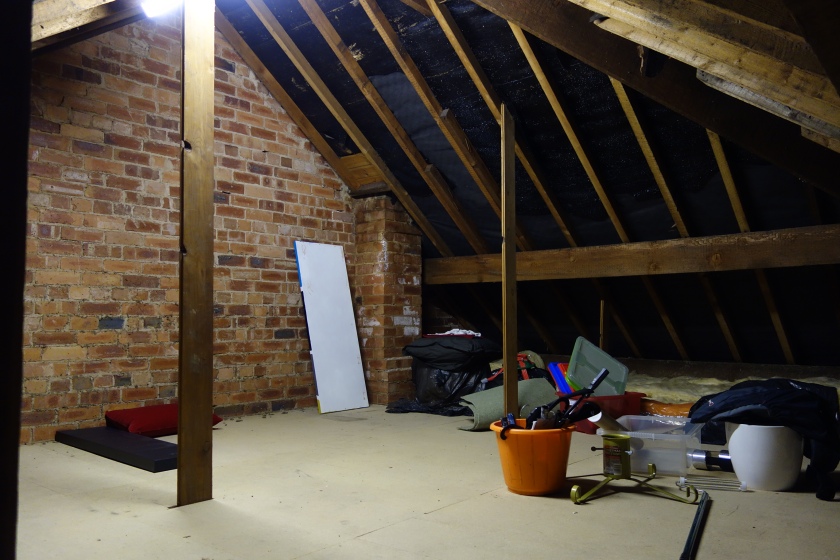 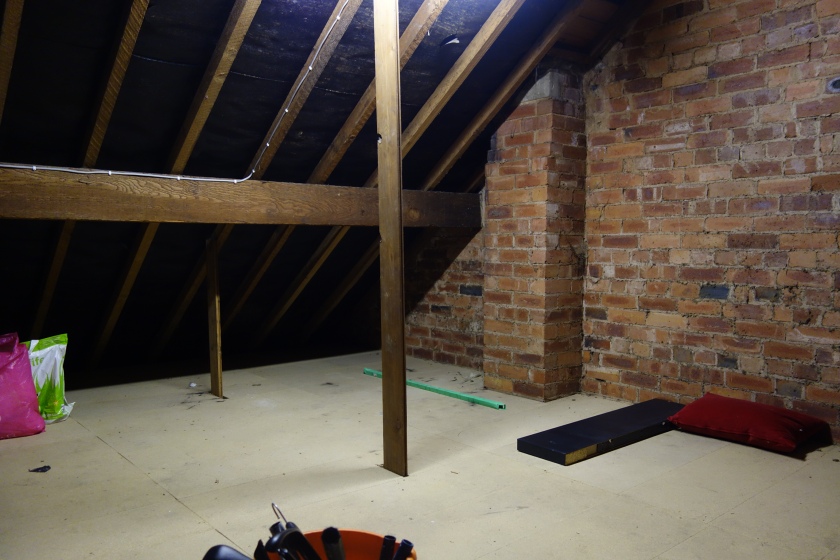 And here was my plan for the bedroom: 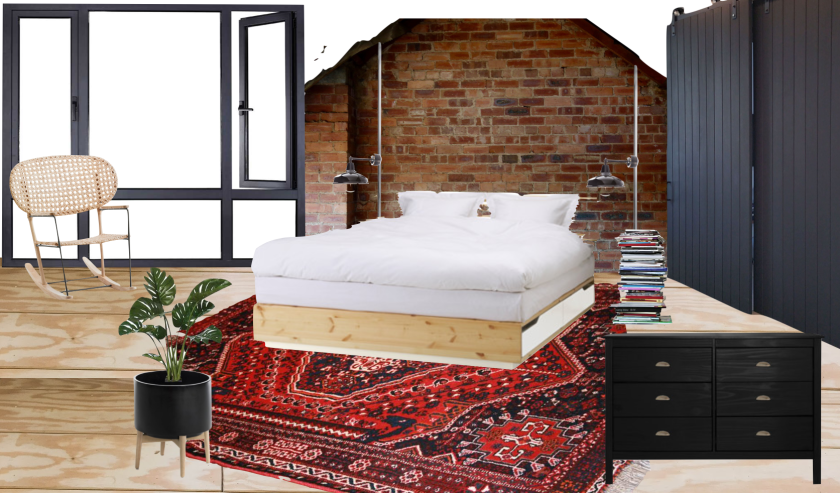 The view from the landing into the bedroom. Gets me every time. 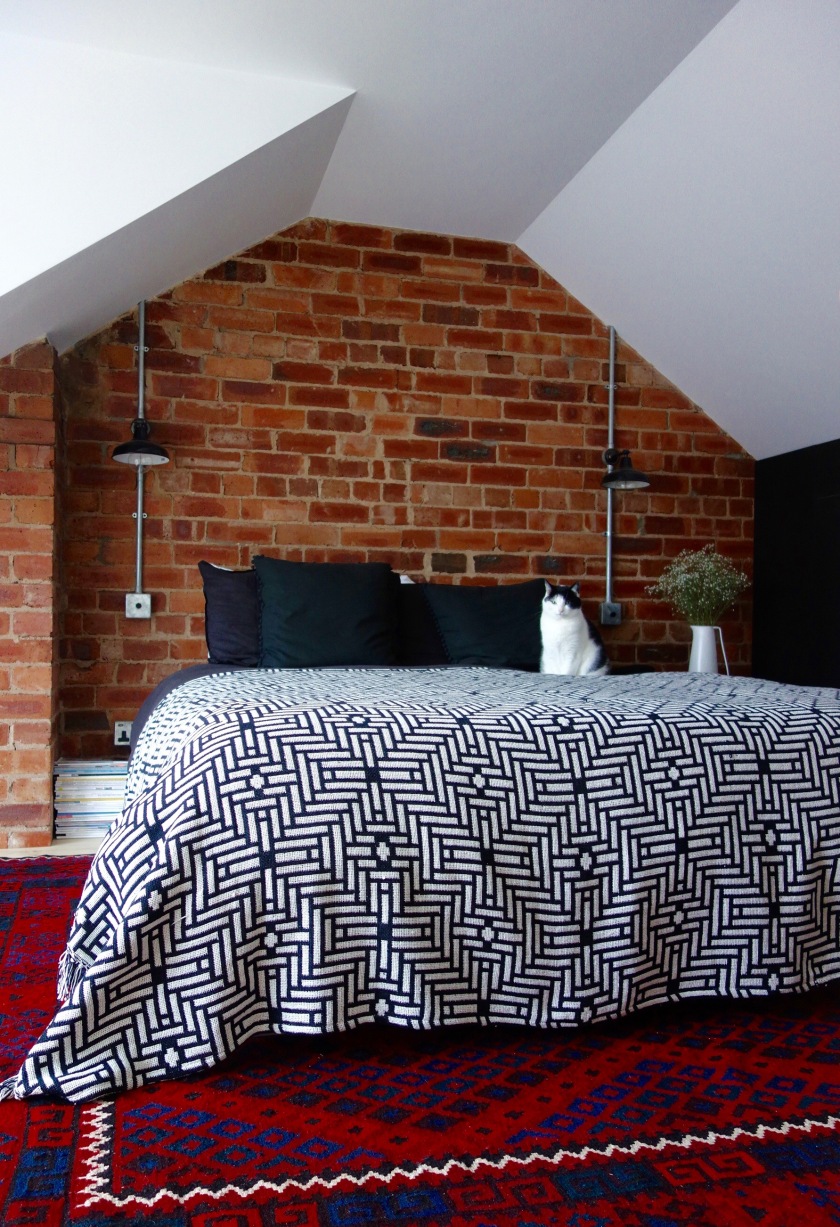 Chooch the cat, can not get enough of this room. Mainly because she’s got a load of new rugs and blankets to paw at and ruin. 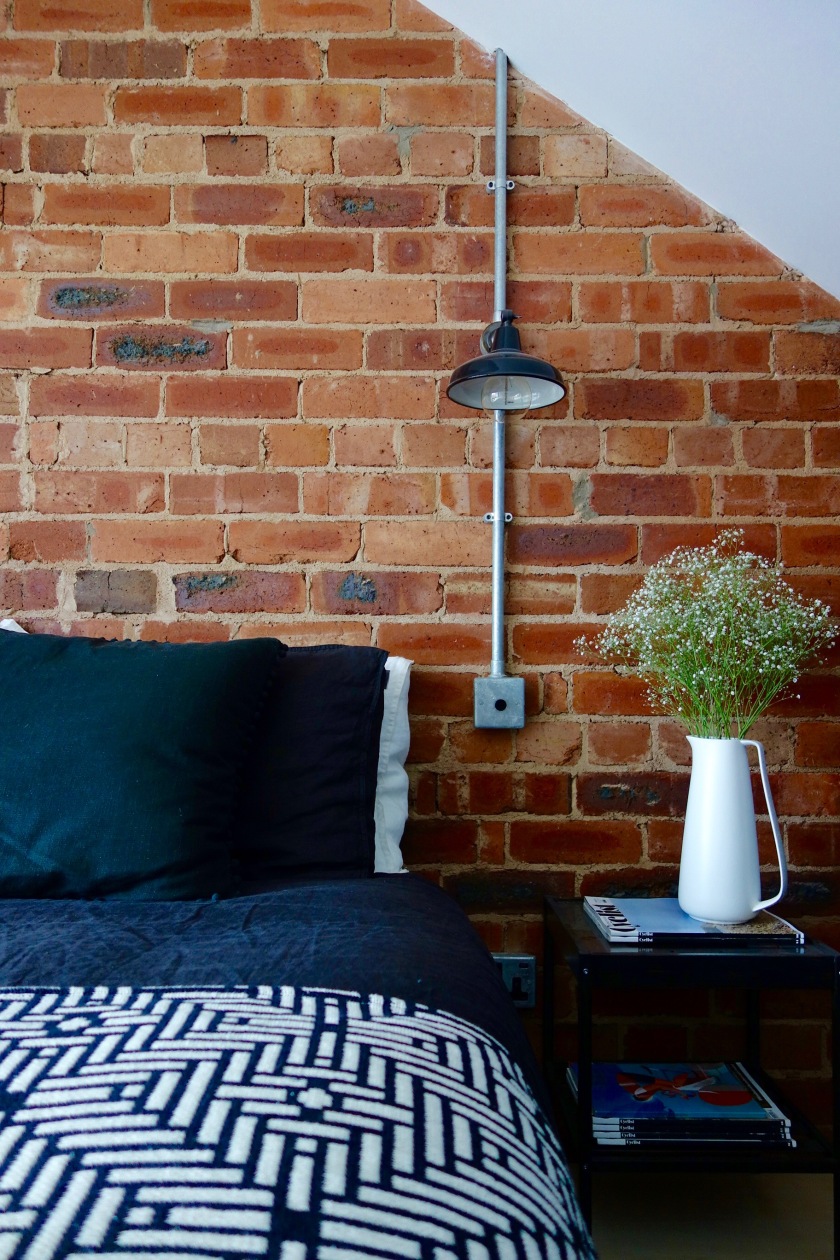 We had to be clever with space here as we were limited with how much width we had with the two chimney stacks bookending each side of the bed. The Factorylux Maria Banjo wall lights from Urban Cottage Industries were the perfect choice and complement the exposed brick wall perfectly. 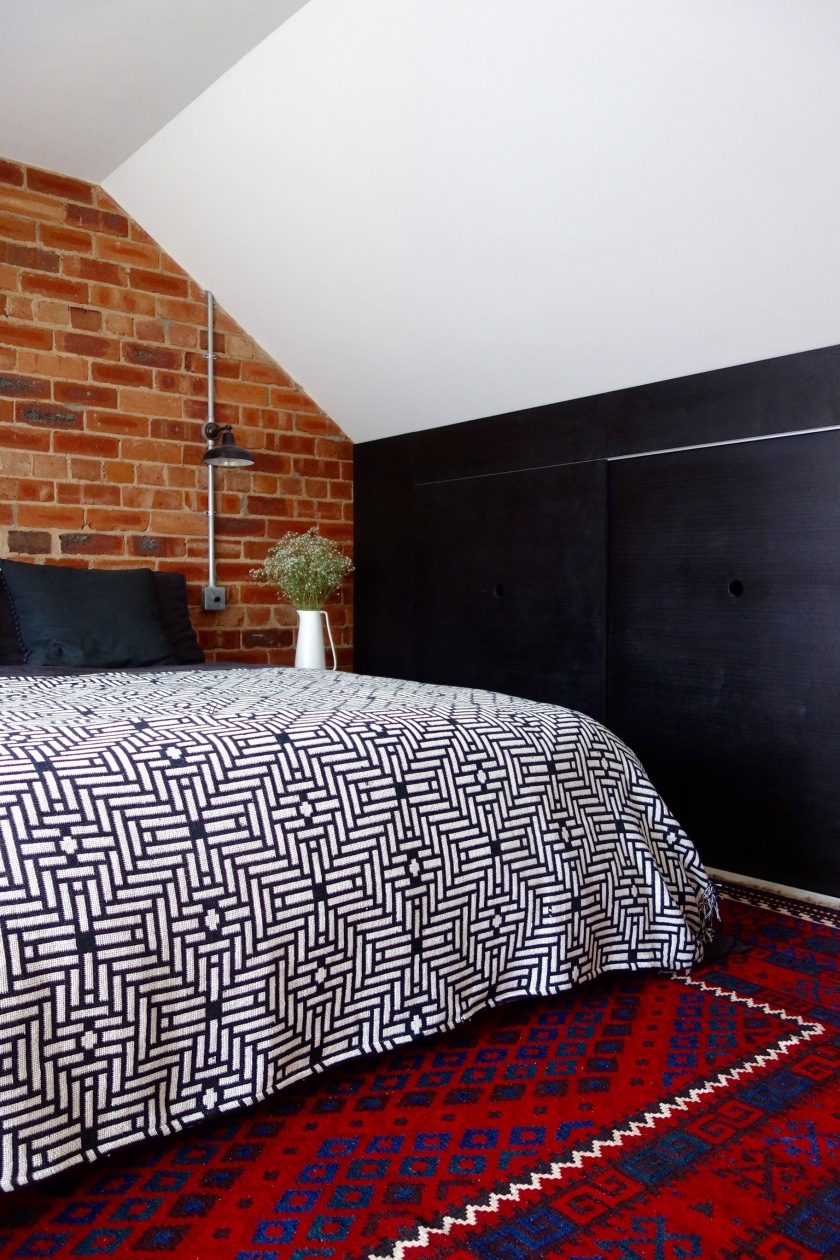 The black stained birch sliding doors are a bugger to photograph, but I think this captures the overall look over at this end of the room. I adore them. Beautiful and so so practical. 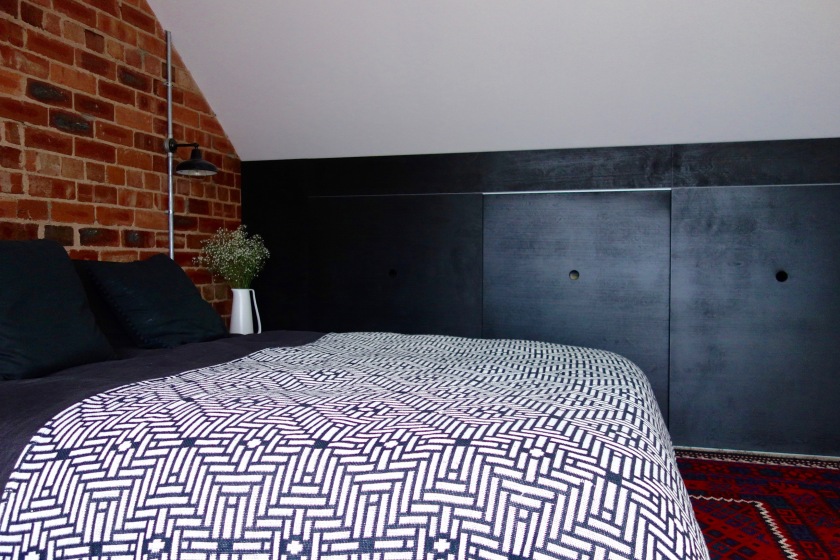 There are three sliding doors meaning we can access the whole width of the eaves storage. A good two metres in depth. 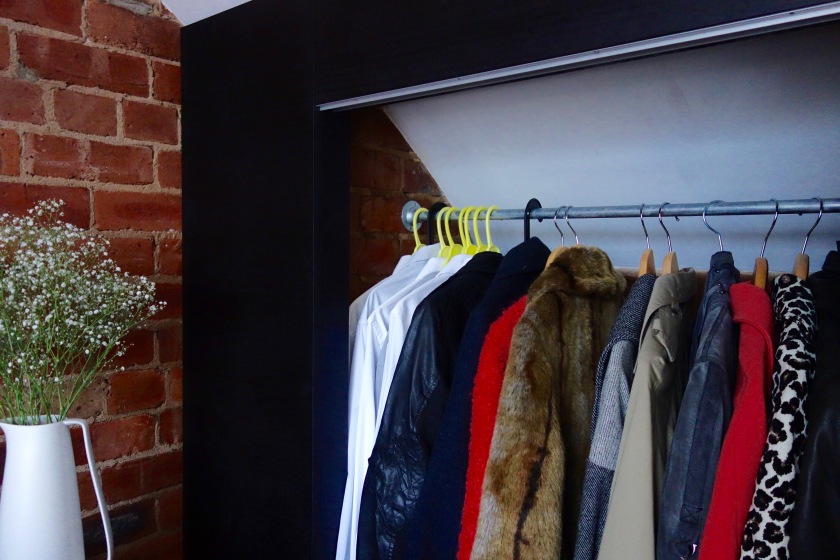 The hubster, very cleverly made a hanging rail that runs across the front using left over conduit from lighting. Waste not want not. 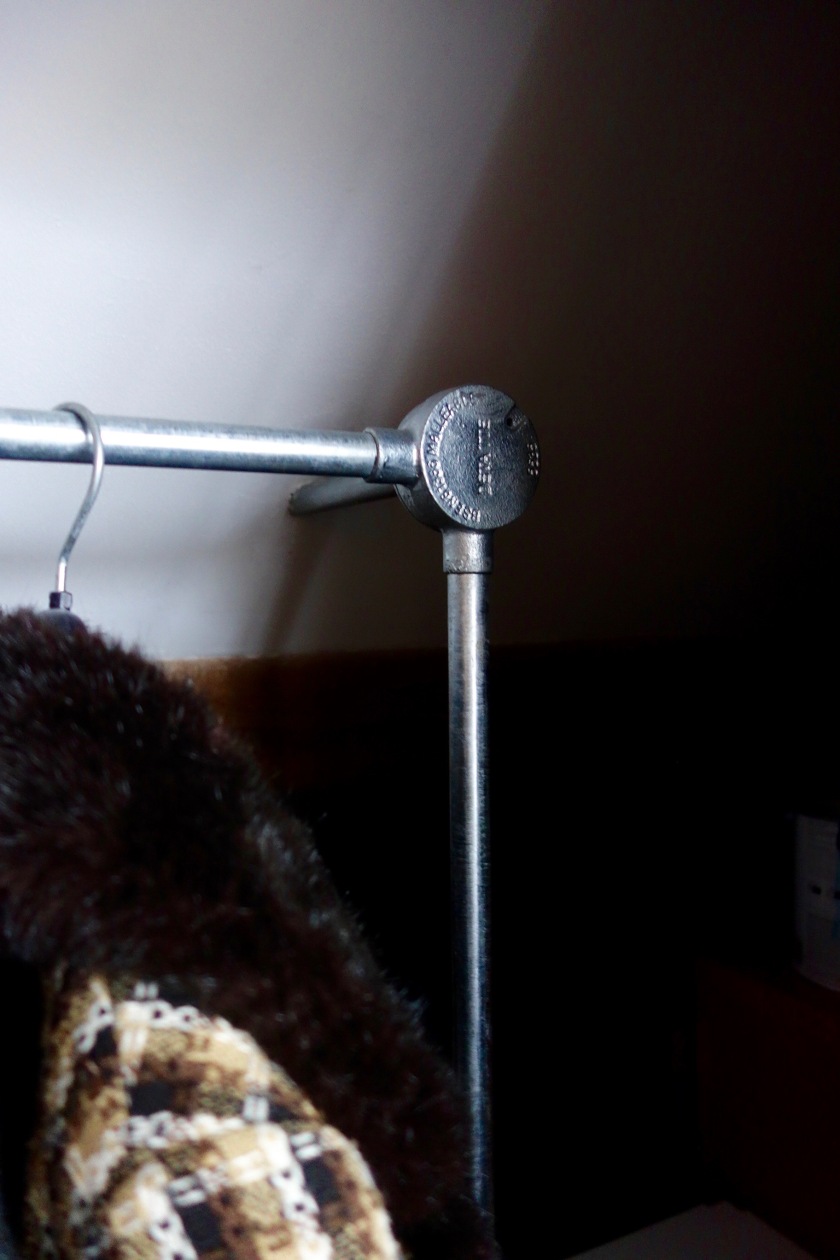 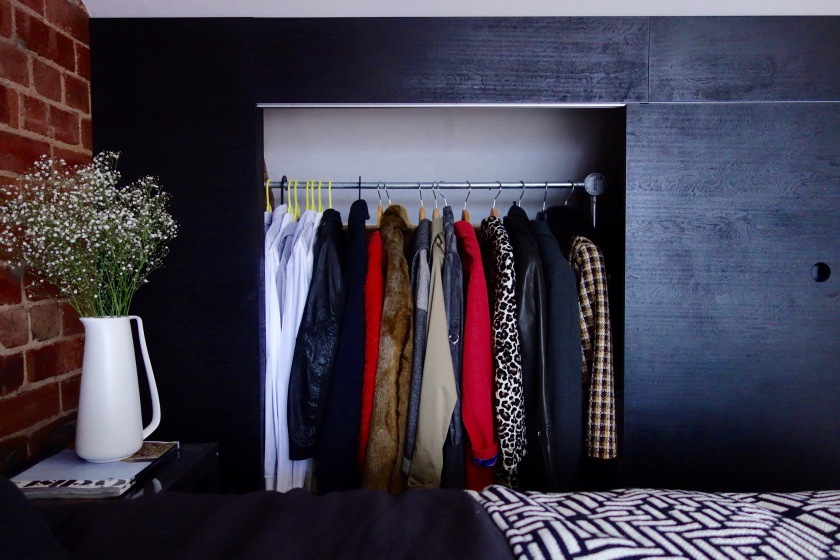 It’s the perfect space to store my ever growing coat collection.

(Is anyone else addicted to coats?) 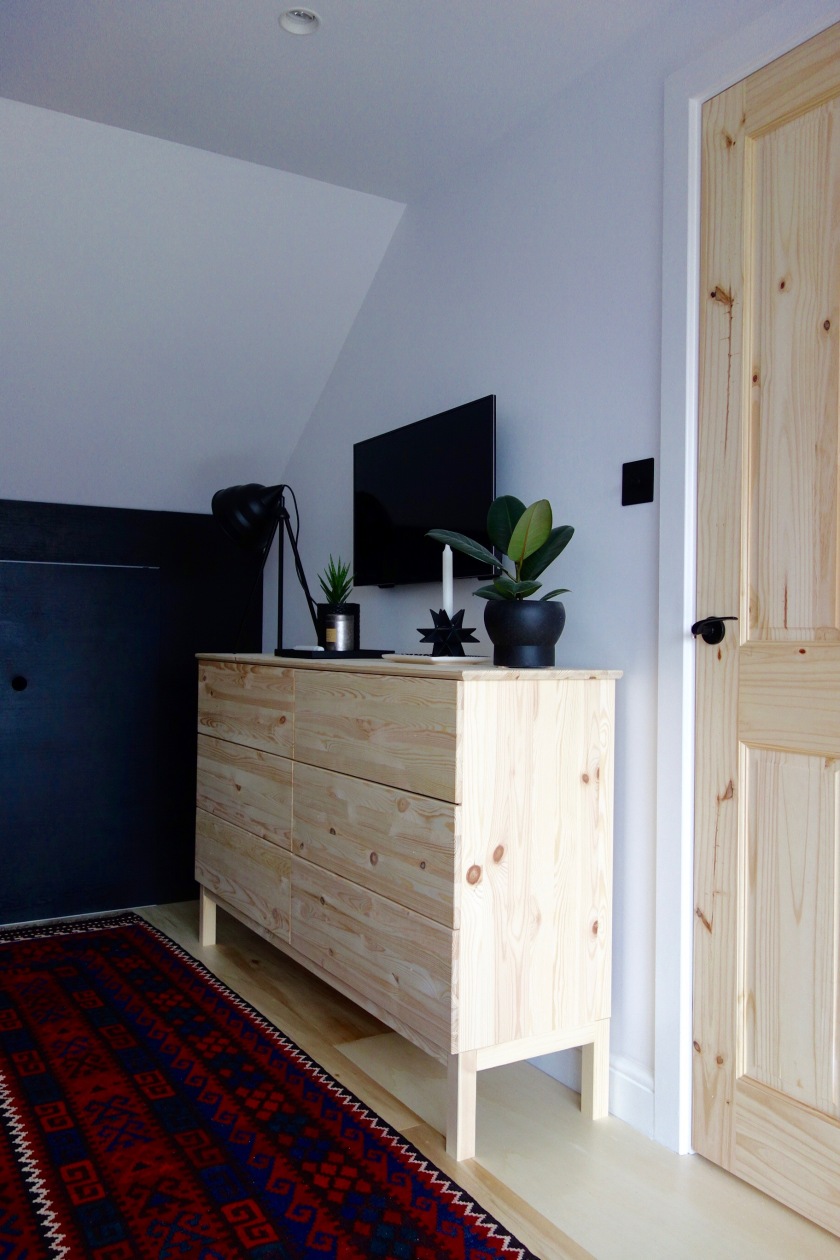 In the other corner, we’ve added the Ikea Tarva chest of drawers, which originally I was going to stain black. But when I saw it against the black birch sliding doors, I knew it didn’t need anything doing to it. Still not decided upon what draw pulls to add. So for now, it’s naked. 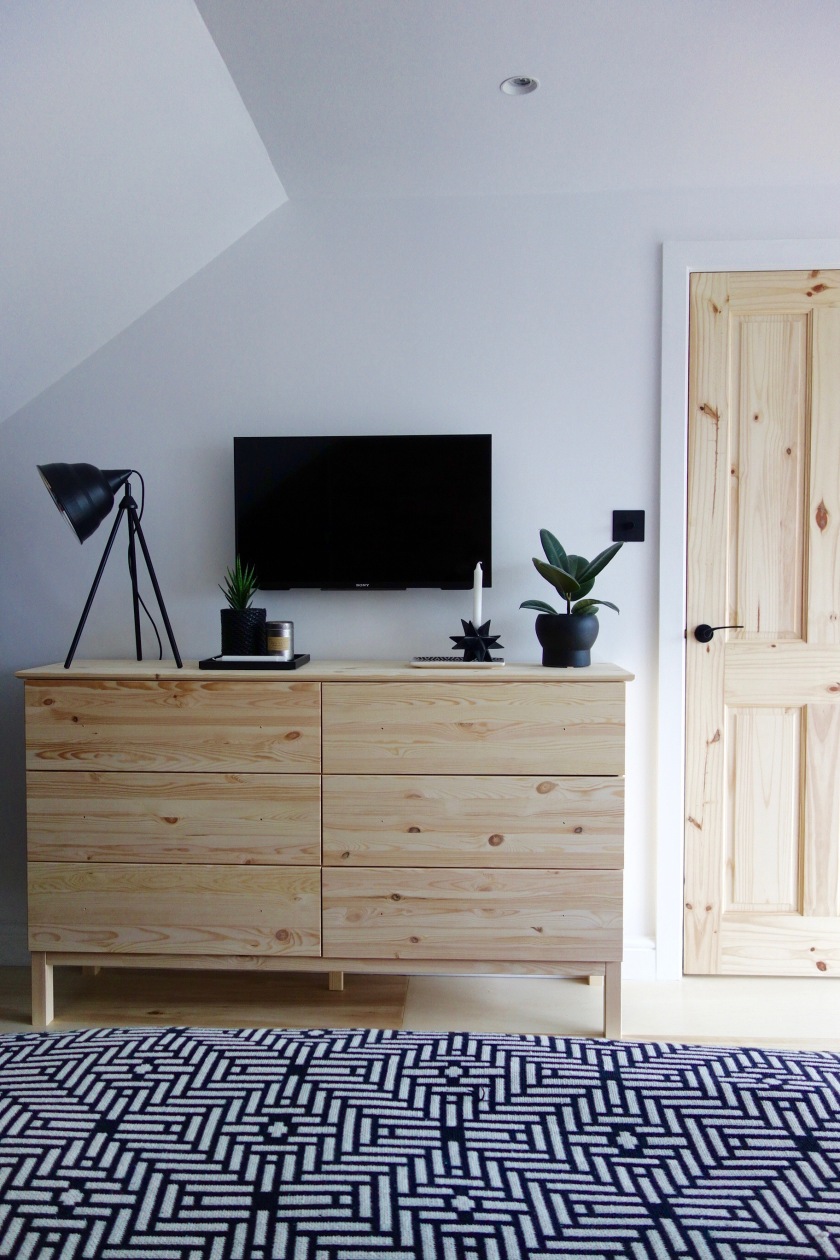 Love how the unfinished chest of drawers ties in perfectly with the knotty pine fire door. 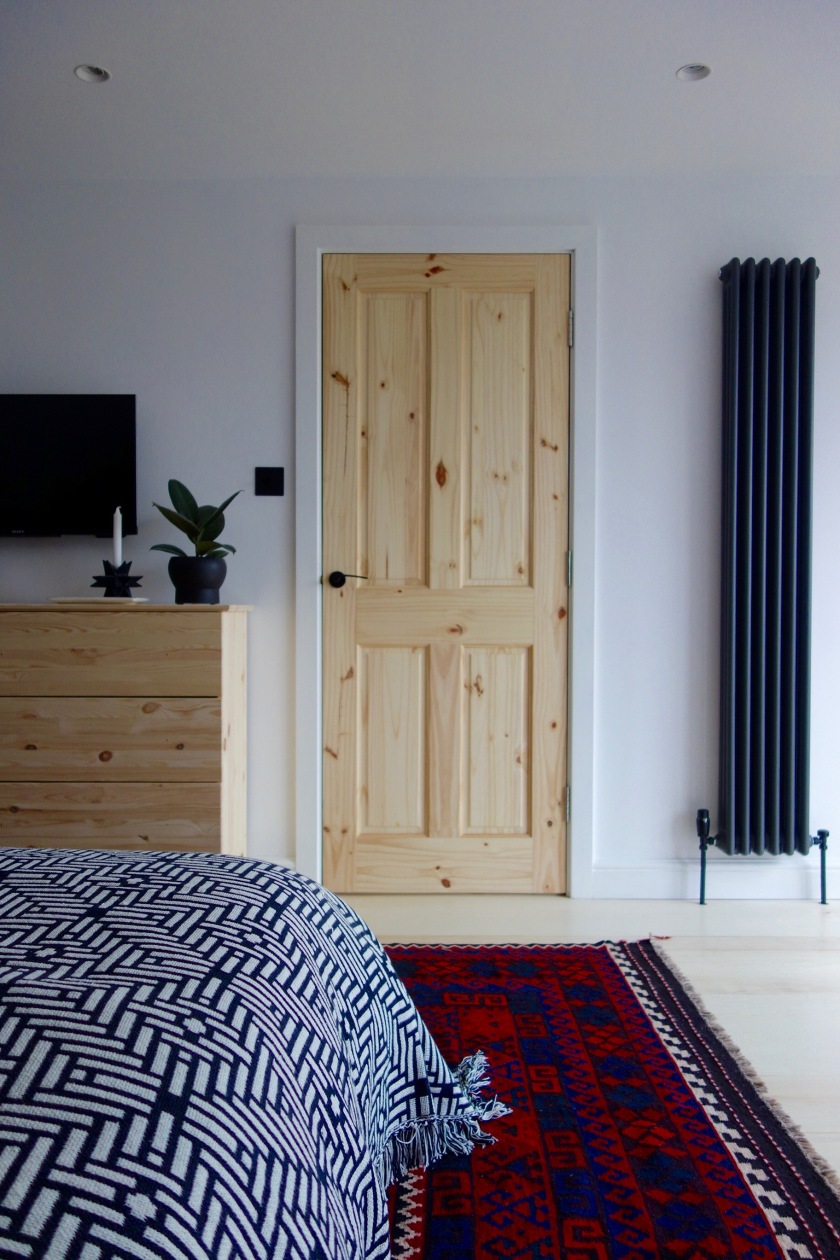 All that pine is balanced out again with the stunning, vertical column radiator in anthracite from Soak.com. A real addition to the room. No need to hide this bad boy. 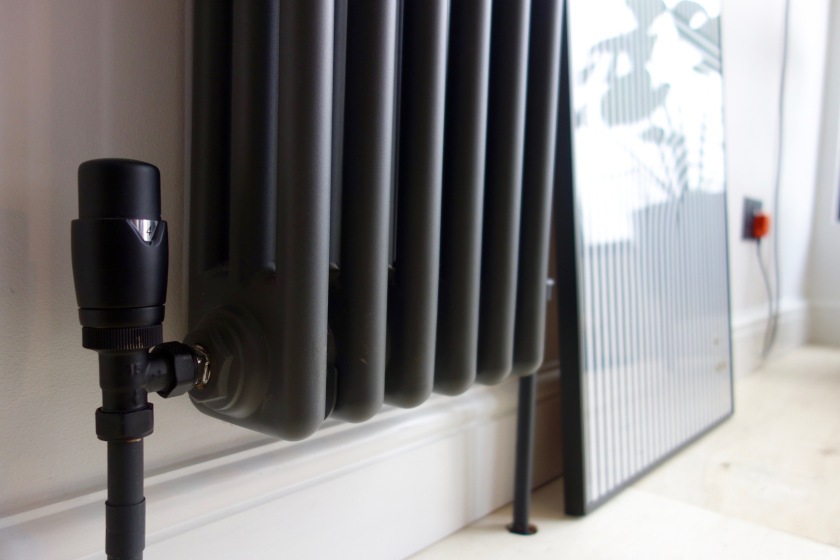 And finished off perfectly with the Radox black thermostatic valve from Plumbnation. 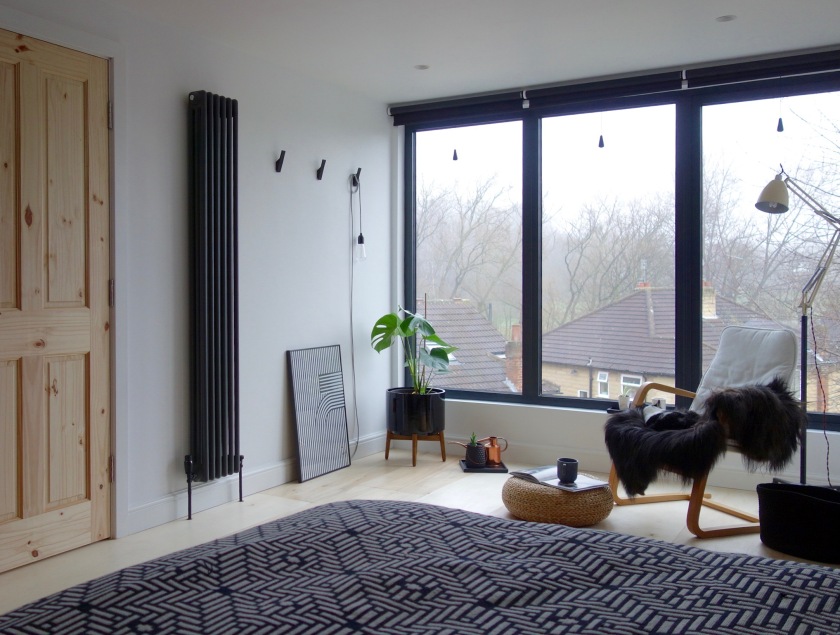 The other side of the bedroom is going to be a quiet place to come and hide away for a few minutes a day. I’ve already started coming up here for 10 minutes at a time and it’s so so peaceful. The view is awesome. Even on a foggy day like today. 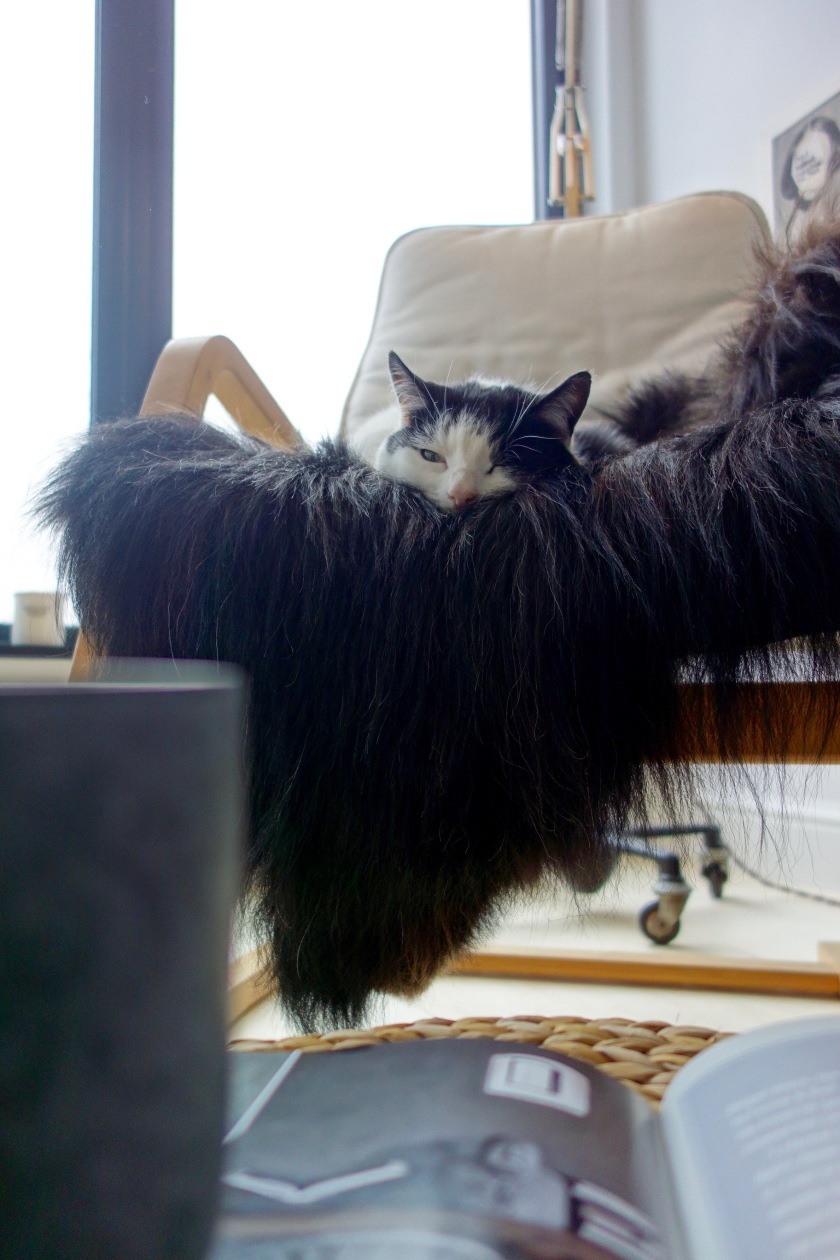 The armchair is an old Ikea number I bought back in 1999 during my student days. It’s a pre-POÄNG, Ikea design. This chair is so old, it’s almost vintage. I rescued it from my dad’s loft, bought an Icelandic sheepskin to throw on there, et voila. Job done. No expense spared. 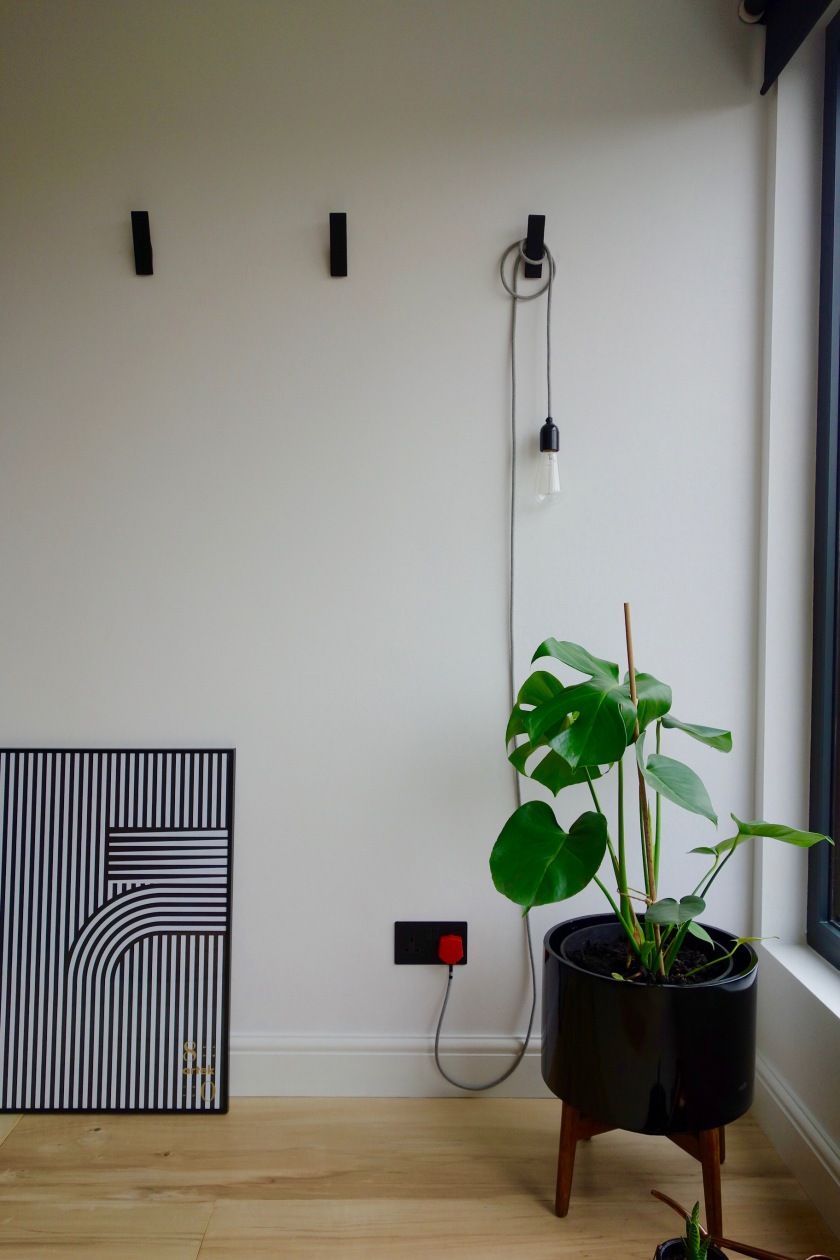 When I can actually get to sit on the chair, this little corner is opposite. The Monstera making its self comfortable in the La Redoute planter. Three scorched ash hooks from Utology are perfect for guests to hang their dressing gown or towel after a shower in the bathroom next door. More coming on that space v. soon. 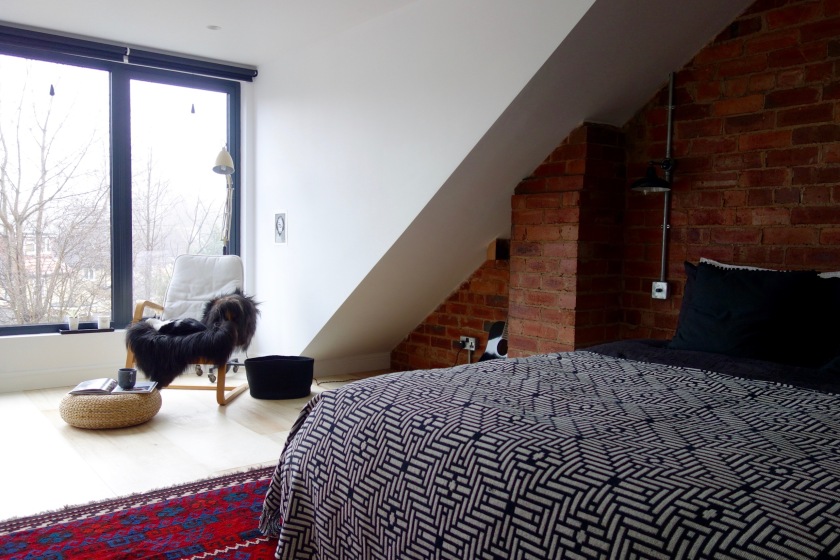 All of the walls and ceiling were painted in Dulux White, from their Light and Space range. We opted for the Trade Diamond Matt finish which has been absolutely brilliant to work with. And I can attest that it is indeed scrubbable. Very. With work continuing in the house, we’ve had our fair share of scuffs and scrapes but it’s been a breeze to just wipe clean. Worth the extra pennies in my opinion. 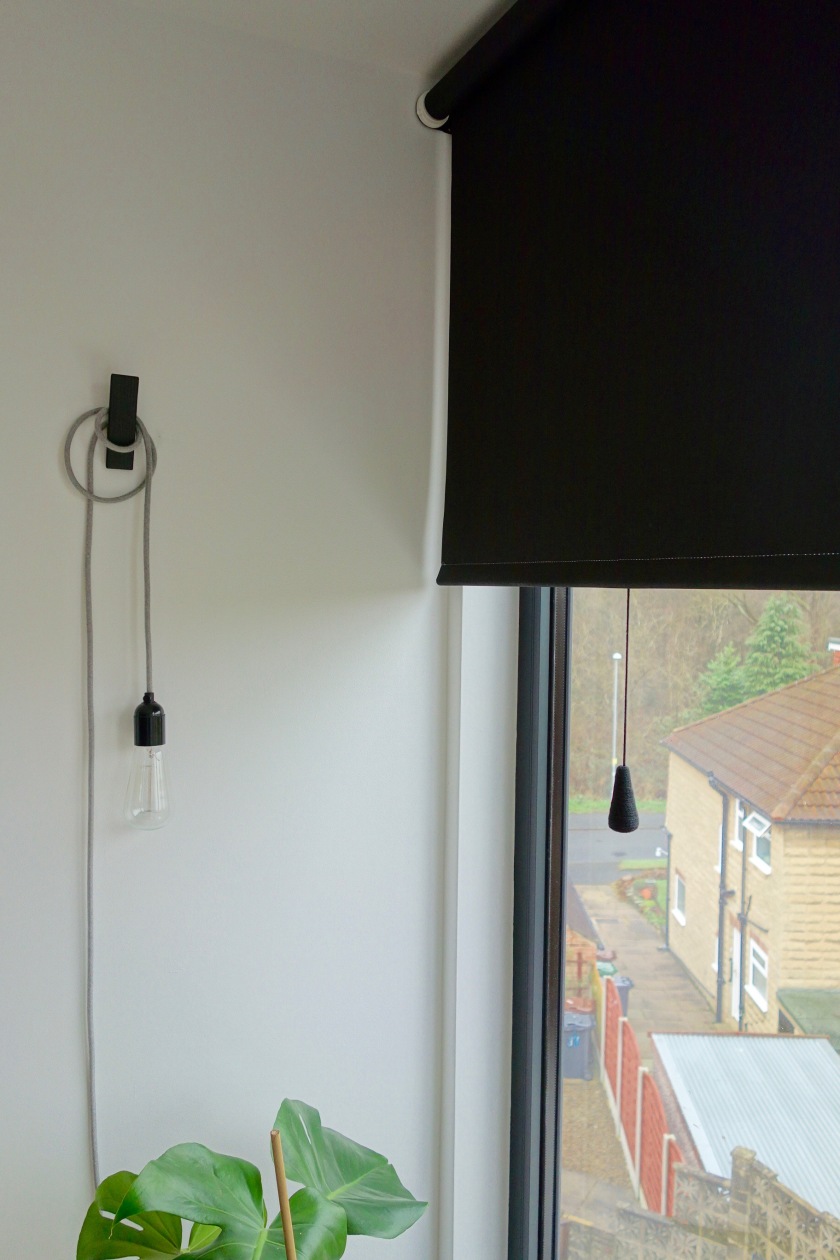 Our blinds from Hillarys were the perfect window covering. Each one made to measure, fitting side by side across the entire window. No fiddly bits. No pull chains. Each blind is spring loaded so all you need to do is pull the bottom to open or close. 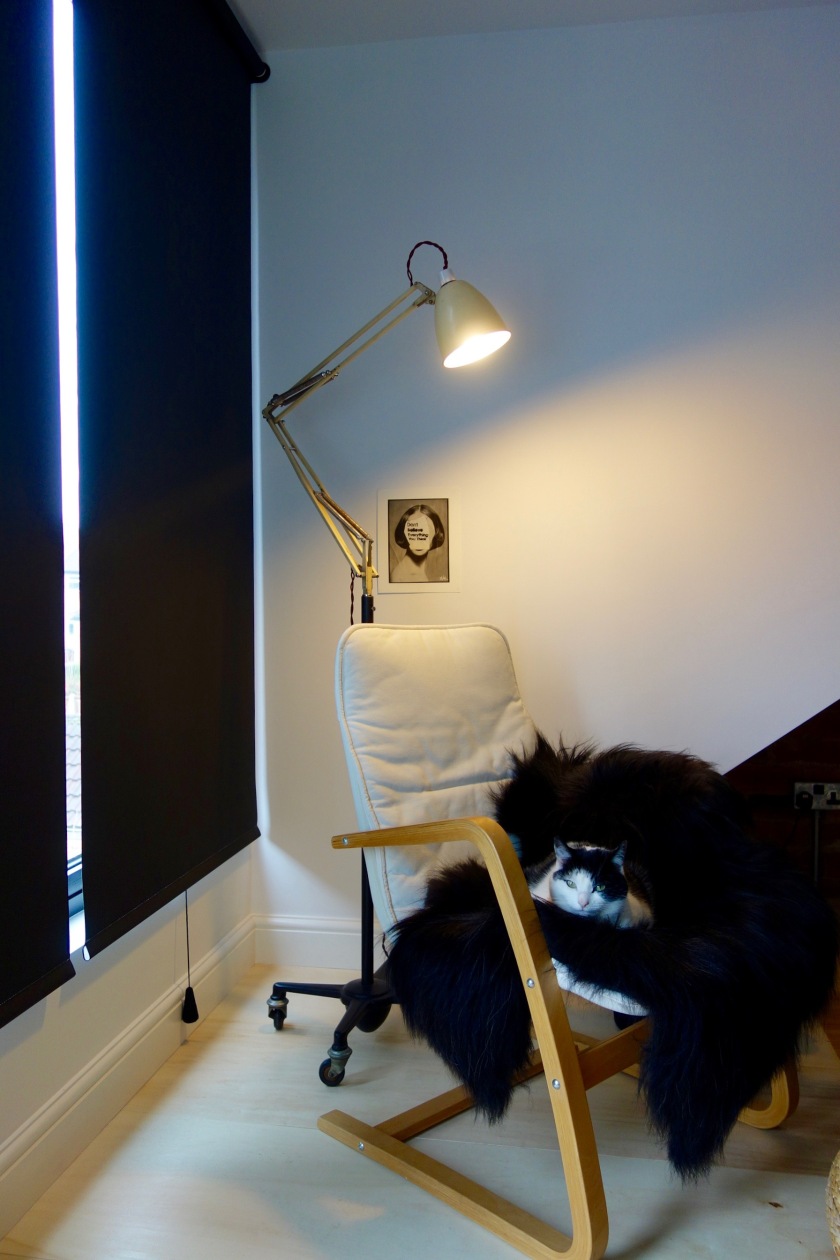 When closed, the three panels echo the three black birch doors on the opposite side of the room. I do love me a bit of symmetry. 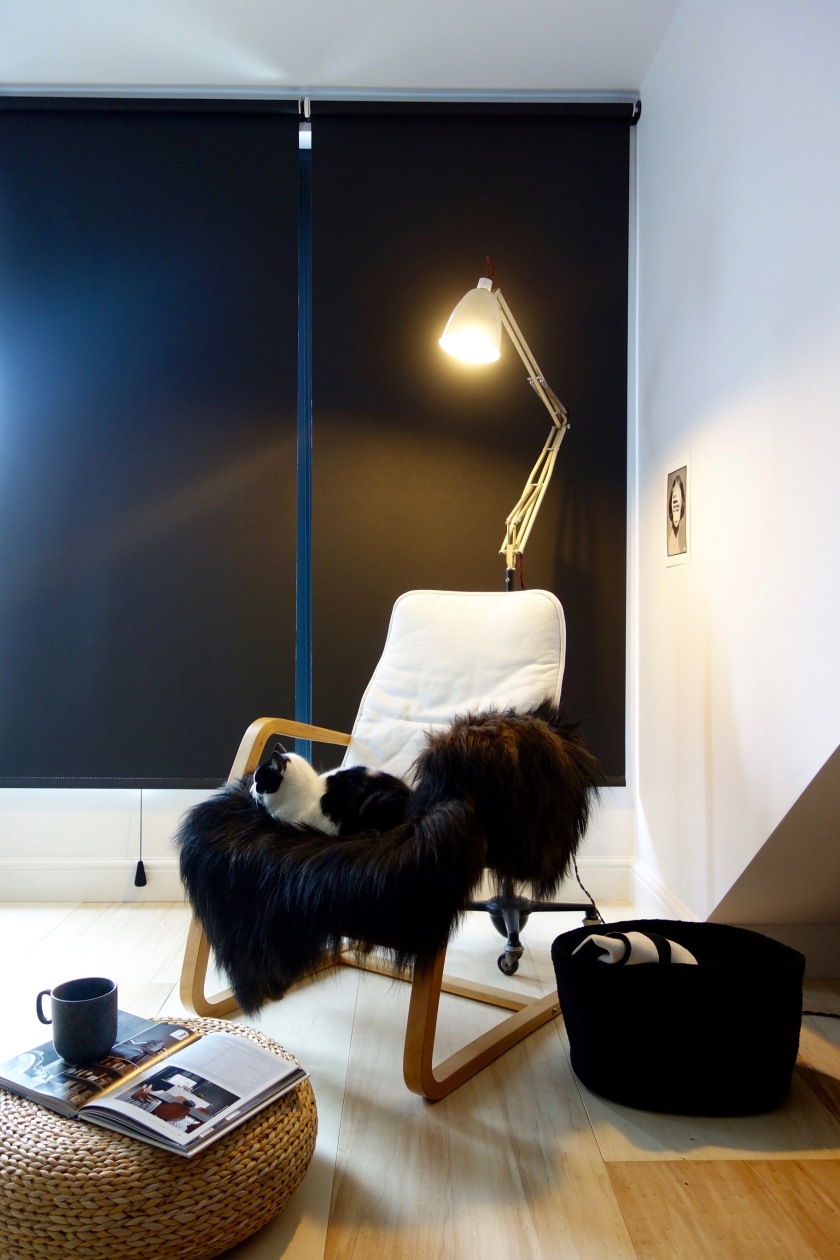 The black gives the mid century Anglepoise the best backdrop. And with just a pull of the tassel at the bottom, the blinds pop up again. 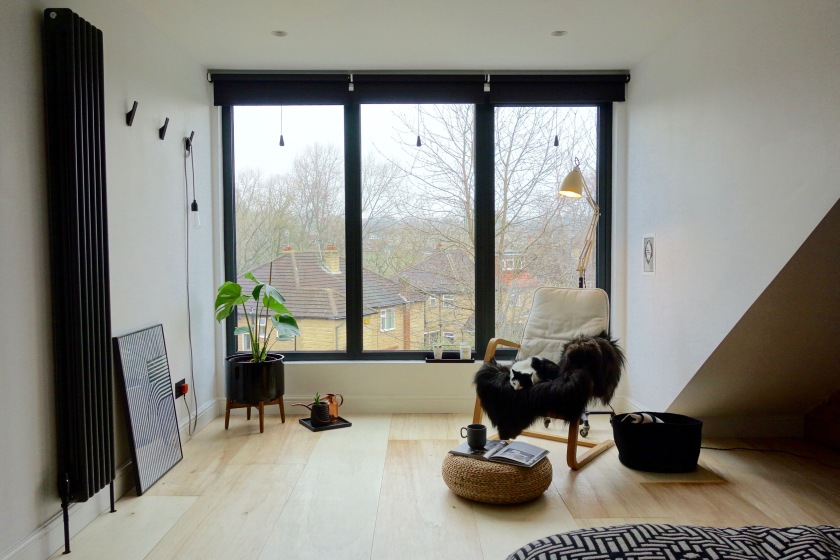 When open, you barely notice they’re there at all. Just what we wanted after investing in those full height aluminium windows.

Can’t believe this is the guest bedroom! Although when tiddles is a bit older, I suspect we may move up there ourselves. For now, we’ll use this room on “date-night” so we can pretend we’re staying in a fancy pants hotel. Simple pleasures. 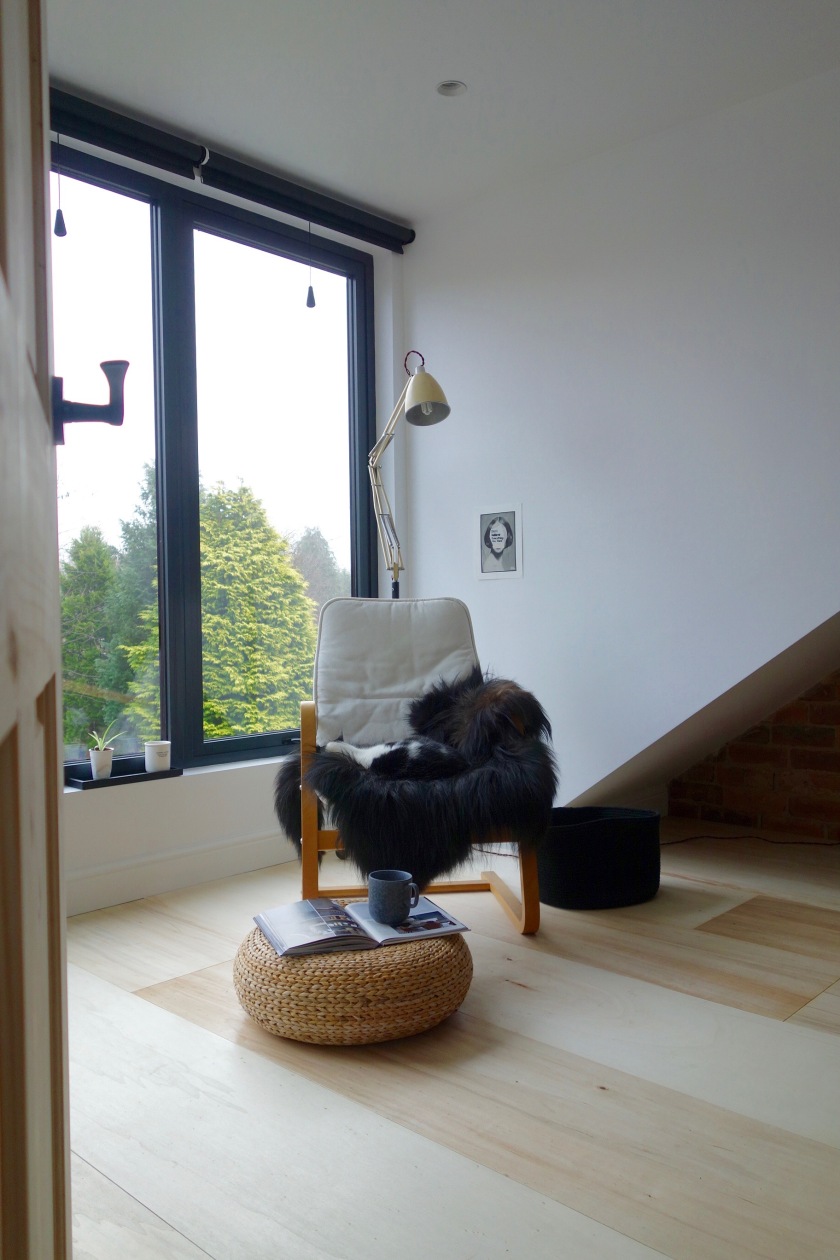 Oh, how could I not mention the floor? You can read all about how we did that over here. We’ve continued that onto the landing space so I can show you guys what’s going on out there soon enough too.

So to end, i’ll leave you with some before and afters… 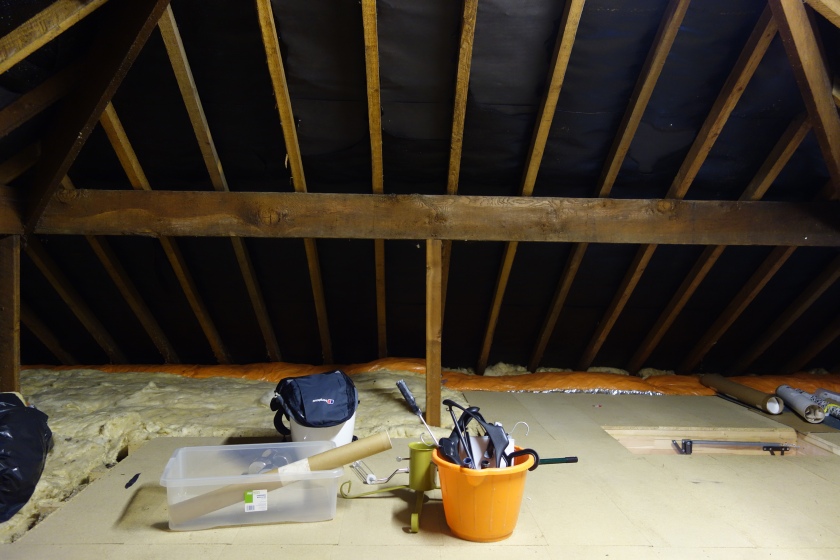 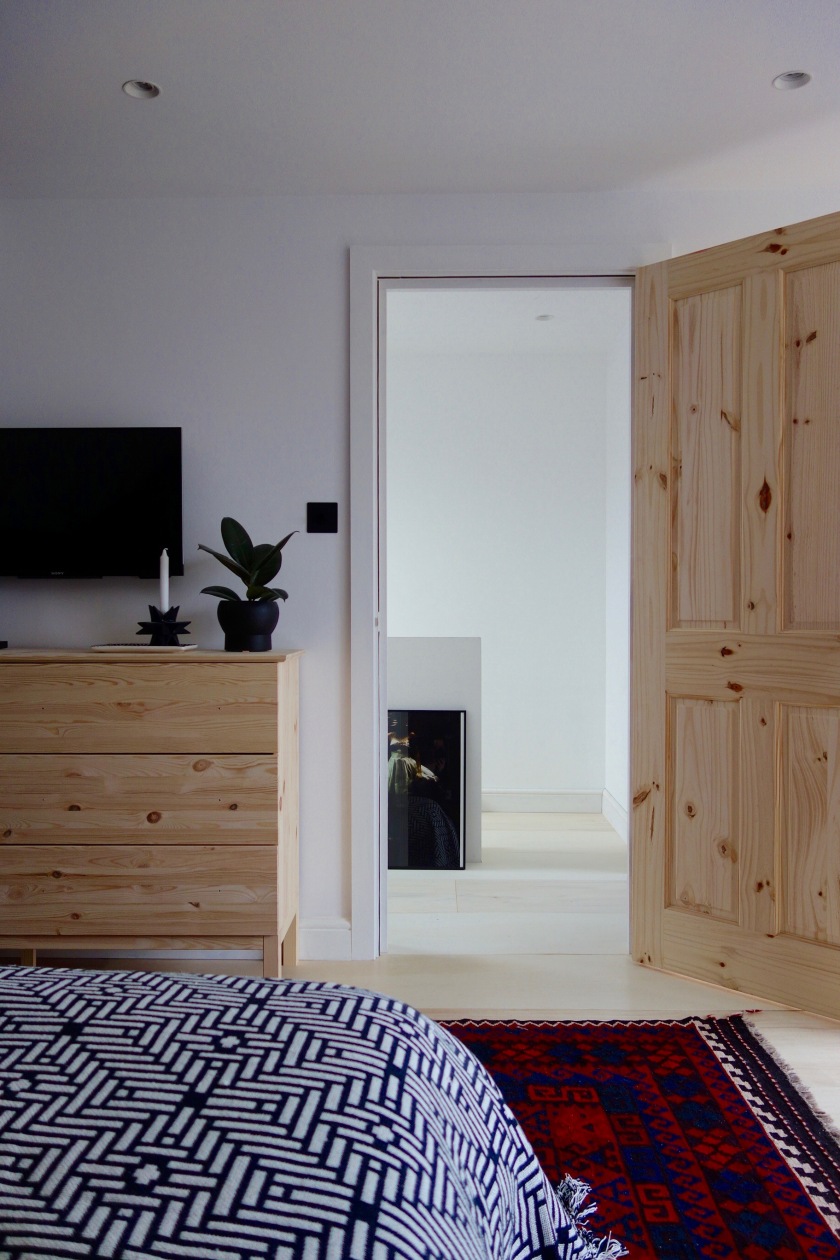 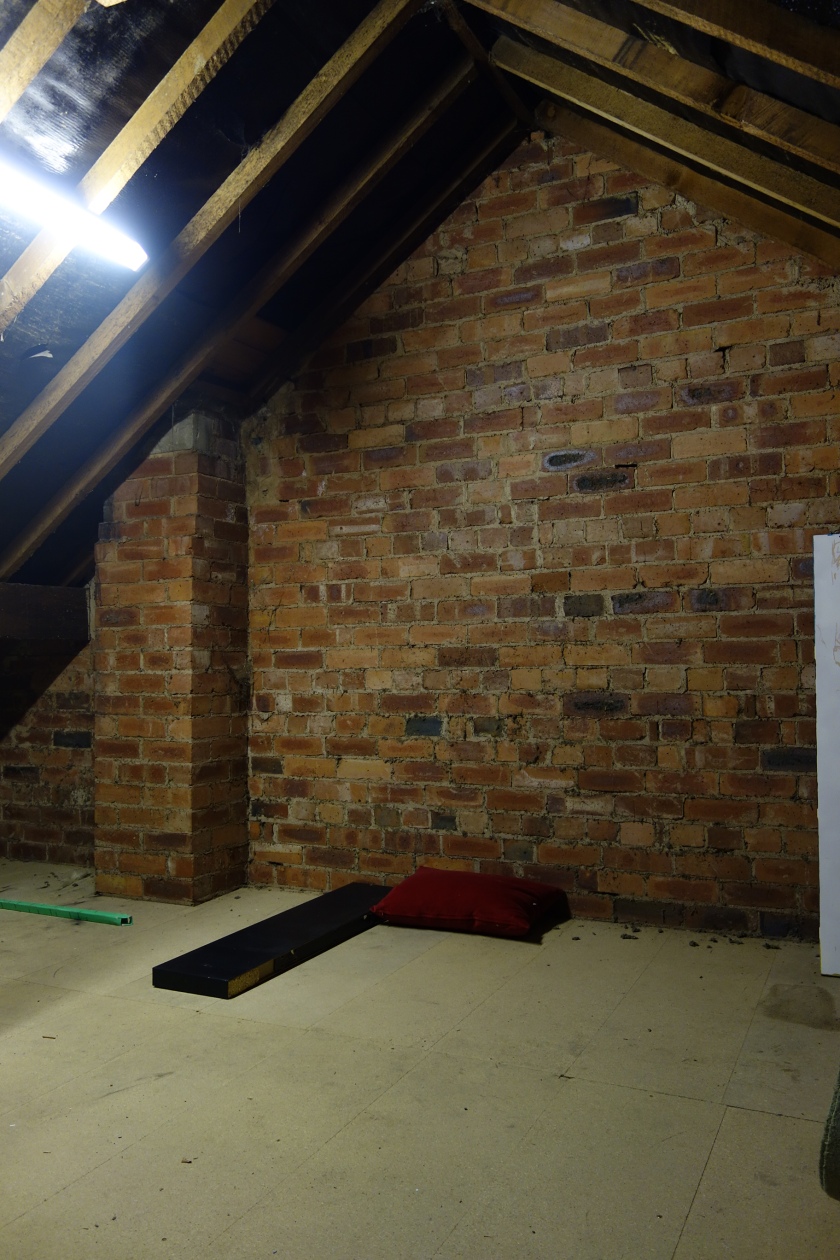 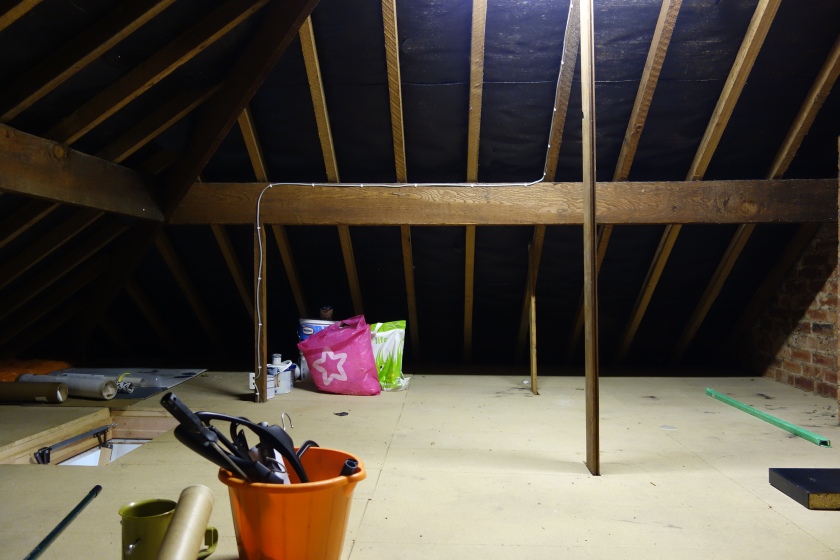 I’d like to thank everyone out there who has been following our long and winding 17 week journey. I hope it’s been helpful for those of you considering doing the same at home. Your comments have been such a boost when things here have not been going to plan. Genuinely. We still have plenty to be getting on with here, but our bedroom is 100% done and we love it, almost as much as Chooch does. She’s still up there now. Lazy bugger.

I would absolutely love to hear your thoughts on the room. Anything you would change? Add? Take away? Let me know peeps and thanks again for reading.