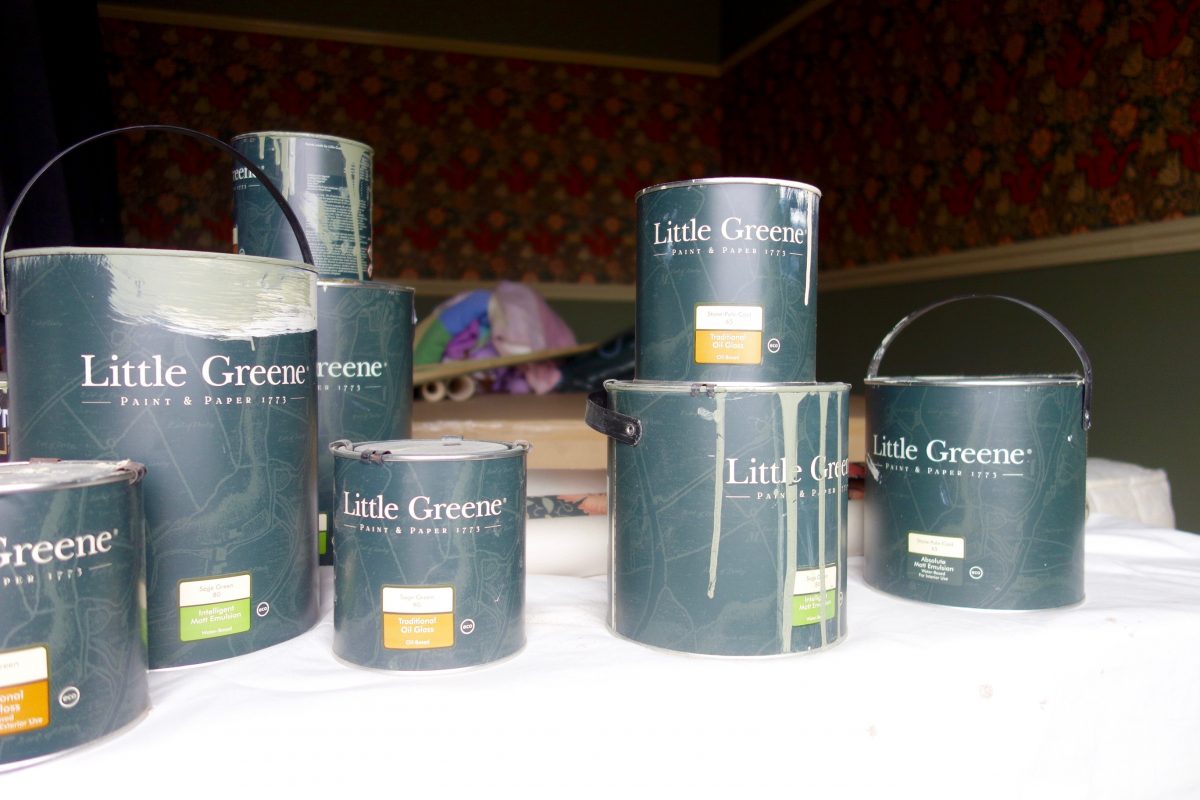 The last time I wrote about this project, we were round about here:

The entire room had been ripped out, wallpaper stripped, carpets ripped up, radiator removed, floorboards being repaired. Technically a building site. The room was about to be skimmed from head to toe in preparation for its new look.

What I didn’t tell you, is that the homeowner, in her excitement to see her own bedroom transform, also began ripping out another two bedrooms.

In for a penny…

This the the second double bedroom after prising off years of wallpaper and flooring . Alas, I didn’t get proper before photos of the room, as this and the third bedroom were originally planned for 2017.

Every square inch of wall, floor and ceiling needed work. Not to mention new radiators, sockets and switches. 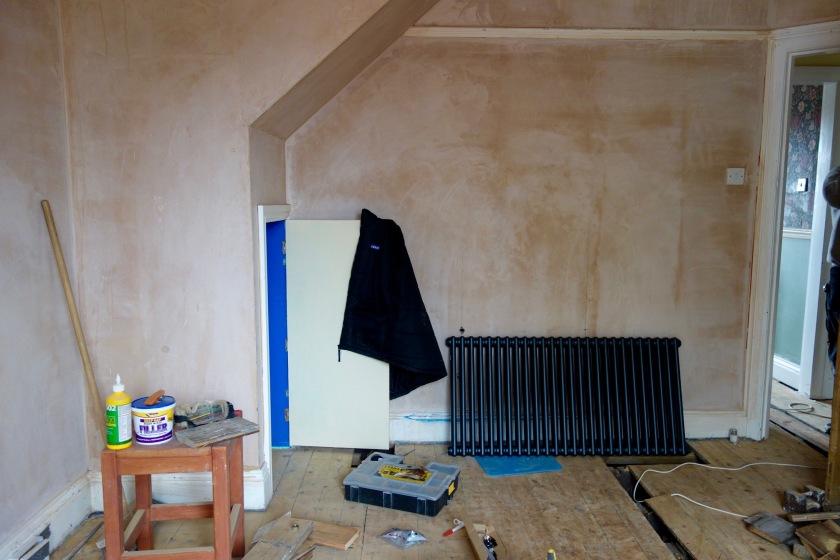 Here is the same room after it’d been skimmed with its new matt black radiator (from Screwfix of all places) leaning precariously against its new home.

The magic of freshly plastered walls never fails to fill me with joy and happiness. And I say that, knowing our loft bedroom is being plastered right now.

You can see there’s still lots of work to do here, but a flat, smooth wall goes a long way. I was itching for this built in cabinet to bugger off though…

….but the homeowner was reluctant (and a little exhausted by all the other work that had been going on no doubt) and resigned herself to it staying put.

It was built years ago, wrapping around the chimney breast which made the room a really funny shape. I continued to subtly drop hint bombs about how amazing the room would look if it was taken out.

Well it seems, all it took was a little extra nudge and a week later the cabinet was removed. Another visit from the plasterer and all was well again in the world.

How much better does that look? So nice to see the original shape of the room again and those floor boards looking clean and new.

That alcove is destined for a large antique wardrobe don’t you think? Oh and the picture rail needs to be painted Sage Green to balance out the skirting boards.

William Morris ‘Willow’ wallpaper takes centre stage along the back wall. The left over roll means the newly revealed chimney breast on the opposite side of the room will also get the same treatment.

New brass socket boxes fitted to the skirting boards too. The devil’s in the detail don’t forget.

So, that’s the room that wasn’t meant to be done just yet. I think you’ll agree it looks so much better already.

Onto the master bedroom next door. Here it was on my last visit:

And here it is now: 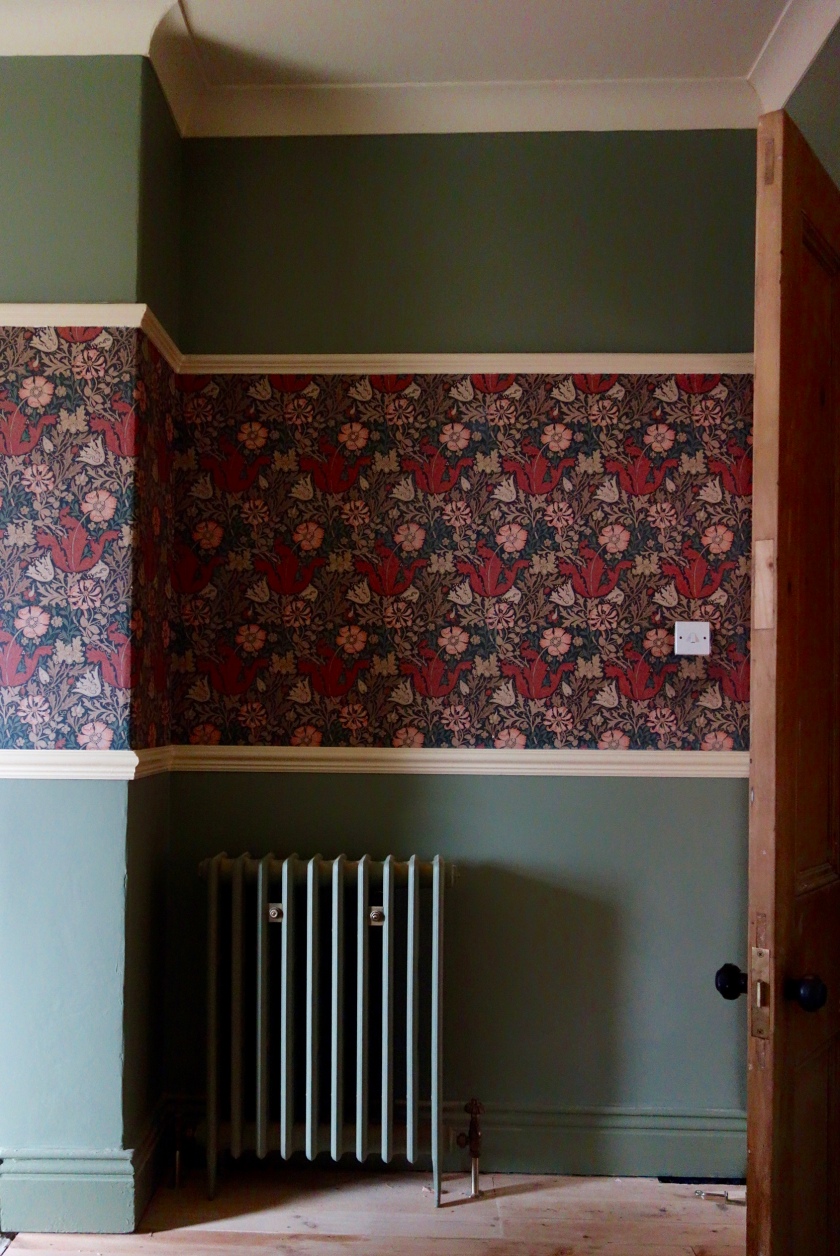 The homeowner’s love of dark, bold colour has finally made its way into her bedroom. Although, the original plan to paint the ceiling dark too was re-evaluated for this north facing bedroom.

Still a fair few bits and pieces to sort here before I can reveal the finished room, which will more than likely be next year now. But here’s a room edit i’ve knocked up in my shed, to give you an idea of what’s coming. Hopefully.

What do you think? I’ve got to admit, i’m really excited to finish this room, I think it’s going to look beautiful. Perfect for a fan of William Morris and antique furniture. Would love to hear your thoughts of how things are going so far…