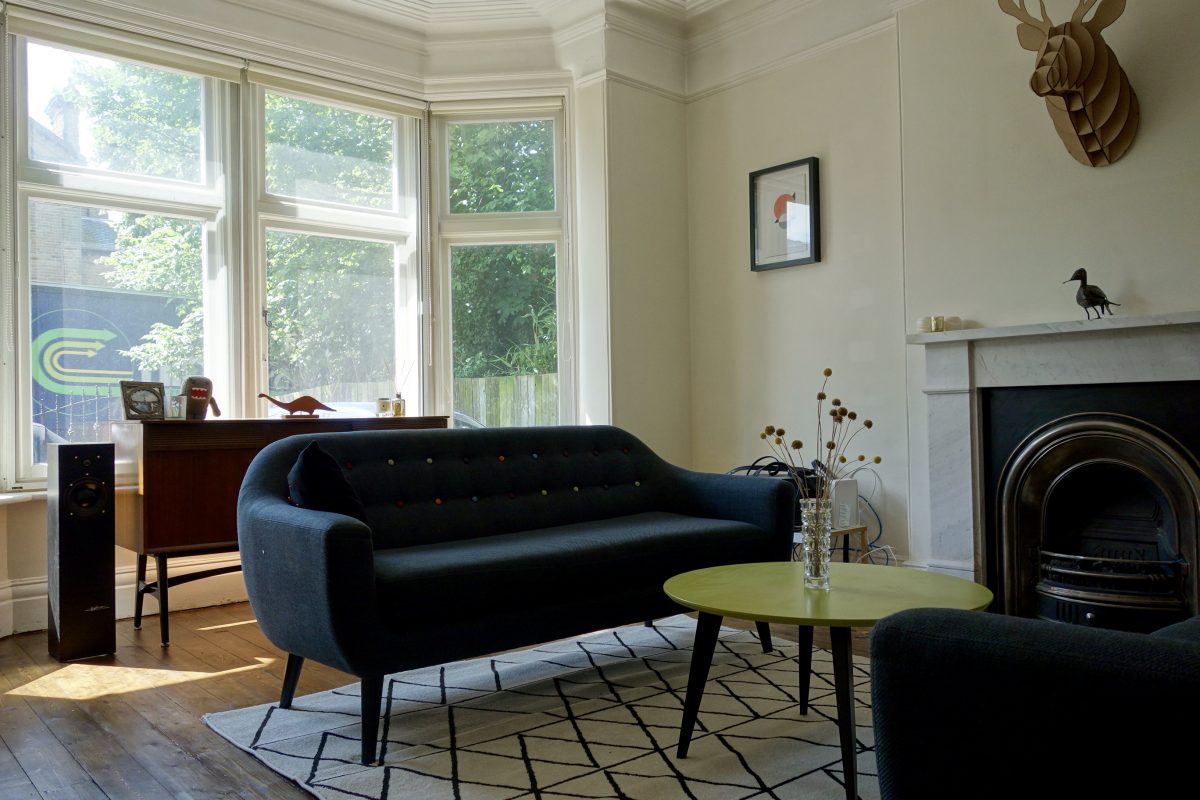 I have news. News of the exciting variety. It’s about this room:

I introduced this Edwardian property earlier this month. You can have a wee catch up here. Since then we have made massive progress with the renovation and re-design of this room. Huge in fact.

The first bit of news is the wallpaper has been agreed. The feedback from the last blog post was fantastic. Everyone loved the wallpaper (how couldn’t they?) but there were some of you with reservations about it being on every wall. And I get that, it’s certainly a bold move.

After a few days letting it sink in and letting them mull over it, they’ve decided. They’re going all out and have agreed to Ferm Living’s Lines wallpaper around the whole room. I am so excited, it’s going to look amazeballs.

Pics courtesy of the homeowners

Secondly, the homeowners have been super busy since moving in having already knocked a wall down upstairs (loving their attitude) and ripped the carpets up downstairs to reveal these glorious floorboards in their front room.

I have it on good authority, getting these boards cleaned up and sanded was not an easy task. Back in the Victorian/Edwardian era people placed a large rug carpet in the middle of the room and painted the edges of the flooring with a bitumen/tar type substance. As you can imagine, this is a real ballache to strip back. But strip they did.

And don’t they look amazing? Over a century old floorboards after cleaning and sanding…

….then half way through staining.

And after a weekend of serious hard graft, these guys now have this wonderful new floor:

What a transformation. You just can’t beat original floorboards. And once they’re done, you’ve got a floor for life. Always worth that investment. Not the monetary investment per se, but the time, effort and tlc.

So what else has happened?

The layout is coming together now. The Drawing Room won’t have a TV, just seating, music and drinks. The geometric rug from La Redoute arrived super quickly just in time to go onto the fresh new boards, giving us the area to organise the seating. The two Ritchie sofas from Made.com now face each other for entertaining, drinks from the decanter and parlour games.

See that beautiful teak side board? Yes, the one with ebonised legs with brass feet and neat brass handles? Well, i’m pleased to say I found this on eBay. It was a complete score and bagged for less than the price of a takeaway. Boom. You can read more about how to bag vintage/antique finds here.

Spot that cool mid-century side table? That was from the same eBay score. Cost = around the price of a Sainsbury’s meal deal. Not quite sure why i’m equating the cost of things to food. Maybe because i’m pretty hungry.

We have several plans to sort out that section of concrete around the hearth. My favourite is to knock it out and fillet in a couple of pieces of reclaimed board. We did this in the Sherwood Forest project and you wouldn’t even know.

The cool, brass and black floor lamp was another eBay find by the homeowner. I didn’t even know it had been ordered so it was great to see pieces landing in the space so quickly. Apparently it arrived unwired, so not ideal, but the homeowners managed to sort this themselves.

We’re still deciding on whether to update the coffee table to something in a warm metallic for a bit of mid-century glam. Tbc.

The radiator (something the homeowners would like to banish throughout the house at some point and update with underfloor heating) will simply be painted in with the wall to reign in the budget a little. We’ve got a pretty good match paint wise for the wallpaper. Either Little Greene’s Hicks Blue or Farrow and Ball’s Stiffkey Blue seem to do the trick.

Bizarrely, Hicks Blue looks really different above to the sample card, so we’ll definitely be getting testers ordered before we start getting the paint brushes out.

And that’s as far as we’ve got. Apart from collating a rather sexy shopping list, which could be another blog post by itself. And probably will.

So what do you reckon? Did they make the right decision to go “all out” with the Lines wallpaper? Don’t fail me now, people.