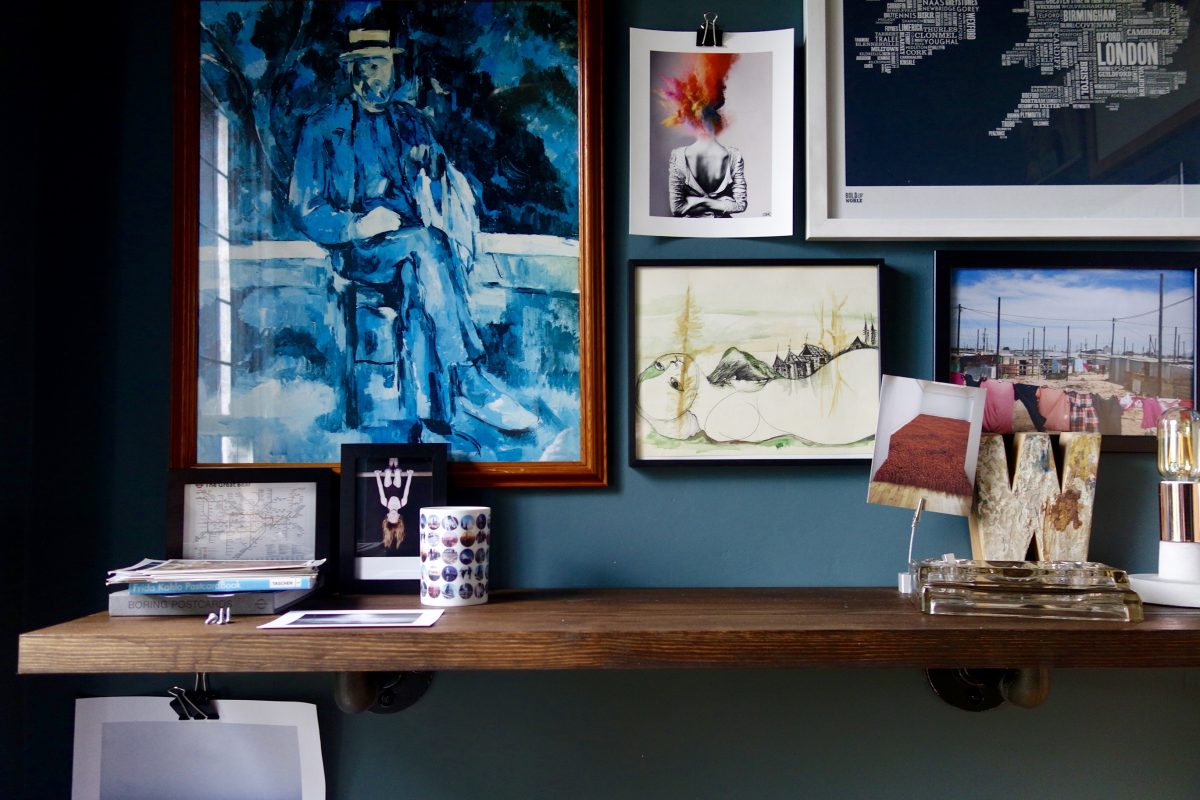 I last mentioned “The Pod” in the Peignoir and Worsted reveal post. You can see the flash of Farrow & Ball’s Inchyra Blue through the door at the top of the landing here:

The Pod, named mainly due to its size, 1.5m x 1.9m is just about big enough to fit a single bed in. A single bed and one small book. It’s actually used as the home office. Not the most successful one, however:

It had gotten so cramped the homeowner had set up office-camp on the kitchen table downstairs. Not great when you’re working from home. Seeing your computer all the time means you’re switched on 24/7. I know a few of you out there can relate to that. It’s not good for a healthy work/life balance.

Things that needed sorting were:

Nearly everything needed to go.

The first job was to fit the new human sized loft hatch. We needed to access the loft space to fit the chandelier over the mezzanine landing. Remember that funny story? We also got rid of the old light pull.

Then we were meant to fit a radiator under the window. The Pod didn’t have any form of heating and still had its original sash windows. As beautiful as they are, you can imagine how cold it gets in there over the autumn/winter (and most of spring and summer). But my hope of bringing central heating to this room was scuppered. Some idiot had glued and screwed hardboard over the floorboards. Nice one! So we had to abandon ship and opt for a plug in oil heater instead. I’ve earmarked a black one and it will sit under the desk, so it won’t really be seen. It’s not the best solution admittedly, but it was a solution which saved us drilling through brick walls or ripping up the floorboards.

Onto the fun stuff… Yee-ha!

So beautiful. The 3m height ceiling actually disappears. You can’t see it at all. Kind of makes you feel like you’re sitting outside with the light streaming in from outside.

Inchyra Blue is a tricky colour to work out. It actually looks blue in this photo above, but it looks soooo green in real life. In fact it’s really similar to Sherwood Forest. It’s got that colour changing vibe. It looks teal, really green then blue again depending on which wall you’re facing.

Finally at this point, I managed to get my hands on this tiny space and start putting all the pieces back together. It’s not 100% finished yet, but I won’t be able to take final reveal photos until August, so I had to very quickly snap these before I left for the day. So don’t judge the layout and styling ok?

The desk top was cut down, depth wise so it could push up again the wall and fit flush with the door architrave. A shelf was fitted above the desk for on-hand storage and a grey Helmer unit from Ikea was purchased, adding slimline storage down the side of the desk.

Various old and new artwork hangs all the way up to the ceiling. The framed, blue man I picked up from a charity shop for next to nothing. It’s the perfect focal piece for this room. It also shows you just how green the Inchyra Blue is.

For the other side of The Pod, I designed a floor to ceiling, industrial style gas-pipe bookcase. The homeowner is a big fan of all things salvaged and industrial and I’ve wanted to design something like this for ages. It was the perfect time and place.

With a total of five shelves and a bulk buy of Ikea magazine files and storage boxes this bespoke unit will become the super stylish home to all the gubbins, paperwork and files anyone could ever need in an office. All made and fitted by my fave duo, Bare Joinery. These guys can make just about anything. Am well happy.

You can’t have a green room without a little splash of copper. The copper wire baskets from La Redoute (with 40% off) will be home to blankets galore. Blankets, and what I refer to as “odds and sods”.

So there you have it. The Pod is very nearly finished. It’s functional, there’s more floor space, more storage, it’s warmer, cosier and most importantly it’s a  work-space brimming with creativity. I bloody love it.

What do you think of it so far?