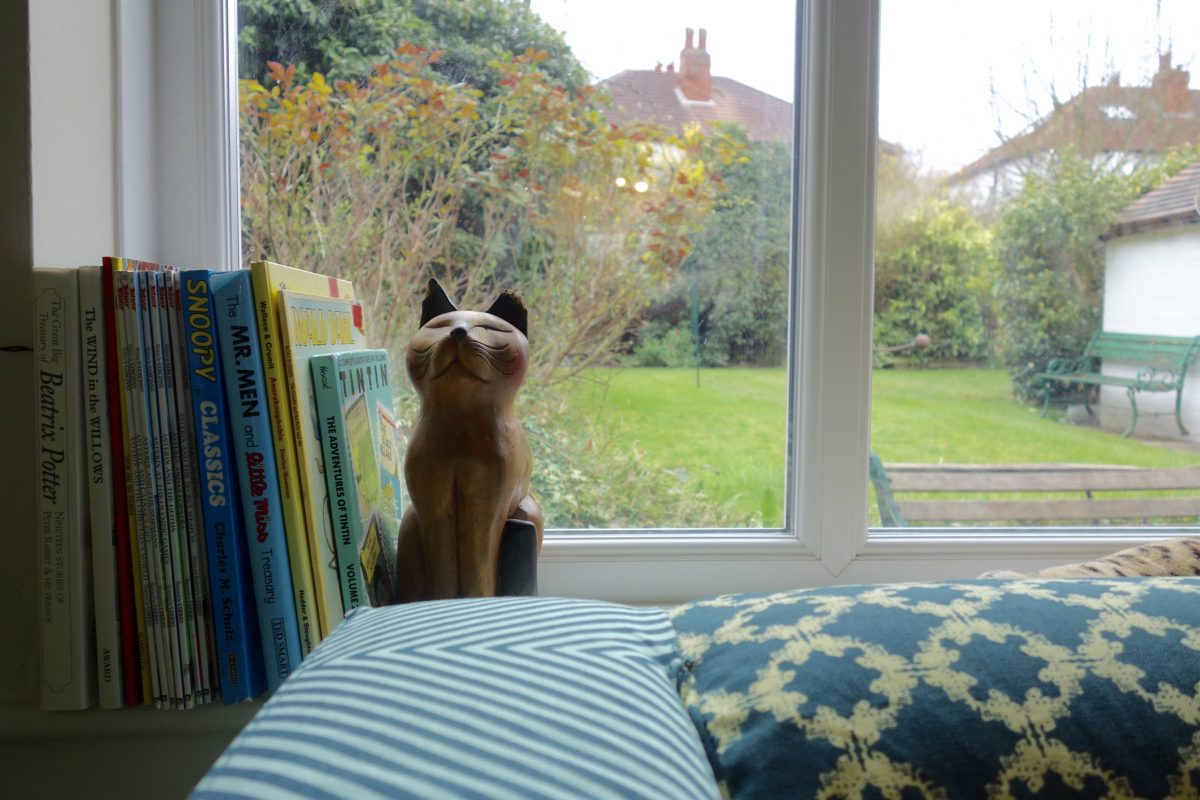 Just over a month ago, I introduced you to a playroom re-design I was working on in collaboration with Thistle Magnetic Plaster, by British Gypsum’s “Rooms Made For You“. The plan was to transform the room overlooking the rear garden into an interactive family space. A room that connected the large, recently completed living space to the great outdoors.

Part II, was all about the magnetic plaster going up on the wall, what it was like to work with, how it dried and what was next on the plan of action. Here’s a brief visual catch up…

It was now time to start getting the mural i’d planned up on the walls. I’d sourced some designs for the decorator and with the help of a projector, the design went from a 2D image on a screen up onto our magnetic wall. In two days, the room was transformed from a cold white square room to a warm, light, creative space filled with colour and extra special detail.

Three window blinds were fitted into the window recess by my main man at Bare Joinery. Along with a few other bits and pieces i’d been sourcing along the way. So now I reckon it’s time to show you the completed room.

The magnetic plaster was used along the full height and length of this wall continuing around to the left.

The magnetic road continues seamlessly around the corner.

Child friendly wooden shapes were turned into super cool magnets by simply adhering magnetic tape to the back. It was so easy to turn almost anything we could get our hands on into a magnet. Big thanks to First4Magnets for sending us a great child friendly set.

All the frames once again are magnetised to the wall using the magnetic tape. No picture hooks needed.

Cheerz also very kindly sent us some magnetic photos, meaning even more family members made it into the magnetic playroom. And a goat. Don’t ask.

I have it on good authority, the playroom owner loves his new space. I’ve also spotted a few “vehicles” from Star Wars added to the skyline by his dad. So it looks like everyone’s getting their money’s worth.

The rest of the room, takes backstage to the main event of course. I kept it simple, not too busy. Toy storage was a must obviously and an eBay sourced KALLAX unit plus some KOTTEBO baskets solved this problem nicely.

There were a few “interesting” pieces added. Doesn’t every magnetic playroom need a vintage picture of a donkey bum and a cat with a wonky eye? I think so.

Smaller additional details were dotted around the room, making this place feel like it’s always been like this; classic children’s books, the little man’s first shoe (don’t know where the other one was?) and a bath toy that keeps making its own way (seemingly) around the whole house.

I really love how the large window now frames the beautiful garden, definitely bringing the outside in.

So then, what do you think? I really hope you like it. It’s been a pleasure to work with Rooms Made for You on this project. Big thanks to them for letting me experiment with magnetic plaster for the first time and letting me give my client the best playroom ever. In my opinion, of course.

Fancy 10% off Magnetic Plaster and magnets from First4Magnets? Well you’re in luck as i’ve got you guys an exclusive discount code right here, right now. Use SPACES10 on the Magnet Selection pack, the Child Friendly magnet pack and Thistle Magnetic Plaster by British Gypsum. It’s a single use code with no time limit. Happy shopping.