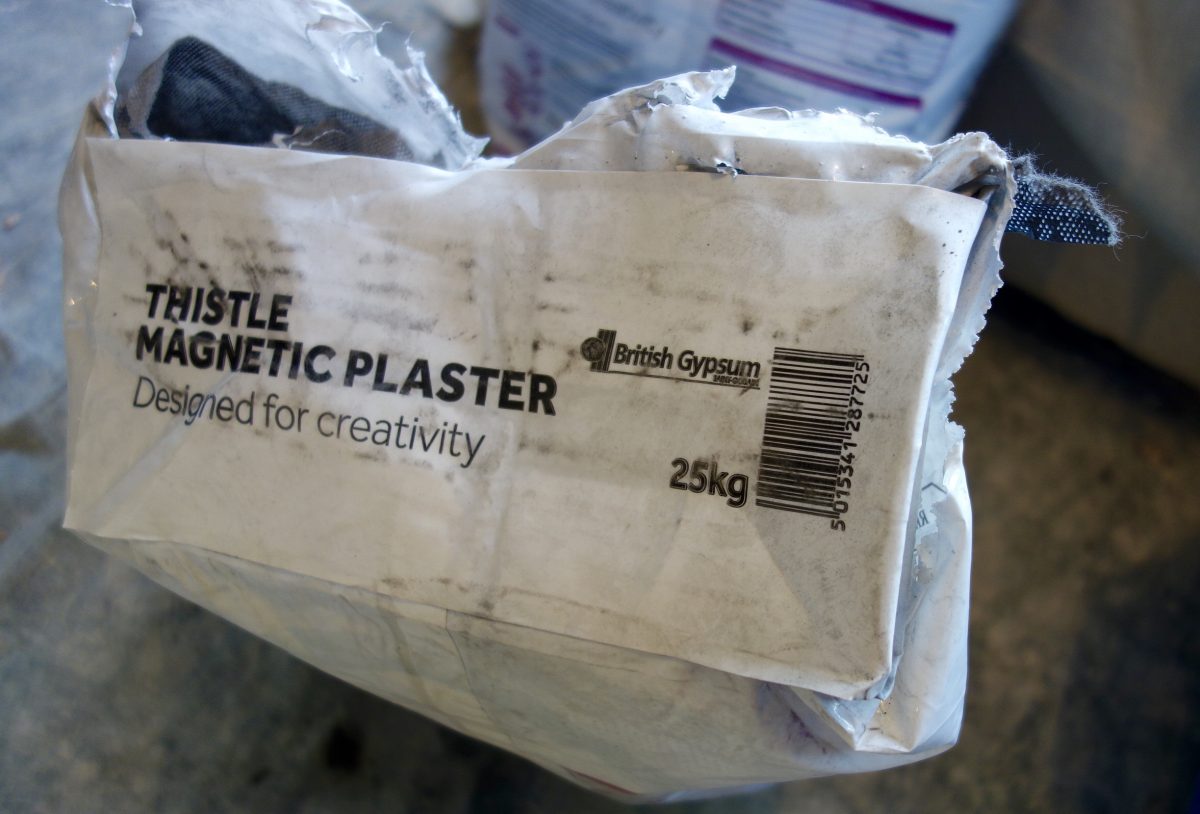 Remember the playroom re-design I introduced you to a little while ago? The one using Thistle Magnetic Plaster, by British Gypsum’s “Rooms Made For You”? Well, we’ve had a visit from the plasterer.

Before – On a cold and moody Thursday in March, the room emptied and sheets down

Behold. The Magnetic Plaster. The maker of magic.

Both the plasterer and I sat down and watched a short video on how to use this specialist plaster. It’s pretty much the same as normal plaster, with a couple of slight variations. So definitely worth checking out before you get started.

The wall was primed

Plaster was mixed until “thick and creamy”. Perfect for scones.

A very satisfying first coat going up. You know how I love a black wall.

And first coat left to dry for a little while

A steady finishing off with a plastic trowel (no water) and it was time for a trip to the sandwich shop. Nom.

My go-to plasterer, hadn’t worked with magnetic plaster before, and he’s not one to gush (you know how men are), but he did say how nice it was to work with. So far, that’s two people happy.

And the finished wall above. Time to tidy up and a cup of tea.

In my opinion, Rooms for You are missing a trick here. This plaster dries out to a most beautiful concrete grey. I’m telling you now, when I have one of these walls done (which I will) I will be leaving it bare. Grey. Unpainted. Anyone who wants to achieve the industrial, raw look at home and doesn’t want to knock walls back to brick or use an effect wallpaper, this plaster will not only give you oodles of magnetic options but it will also give you a concrete coloured wall. It shall be MINE! Anyway, less about me. Back to the playroom….

It was now time for some magnet fun. First4Magnets, one of the the leading stockists of Magnetic Plaster very kindly offered to send me a child-friendly selection pack of magnets. After all, this room is going to be a playroom and not all magnets are suitable for little people. Especially toddlers who are obsessed with placing tiny items into their mouths. If small magnets are swallowed, well there’s the obvious choking hazard. But if two or more are swallowed then there’s a real risk of them sticking together once inside. So please do choose carefully when selecting your magnets. 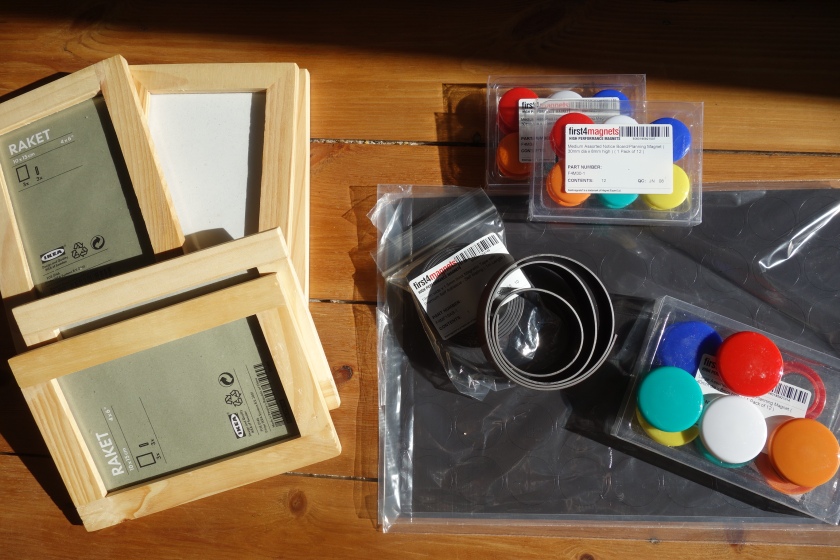 I’d already picked up a ton of old Ikea frames from the charity shop. £1.50 for the lot. The First4Magnets’ child-friendly selection pack included some rolls of self adhesive magnetic tape. It was a no brainer where that was all going…. 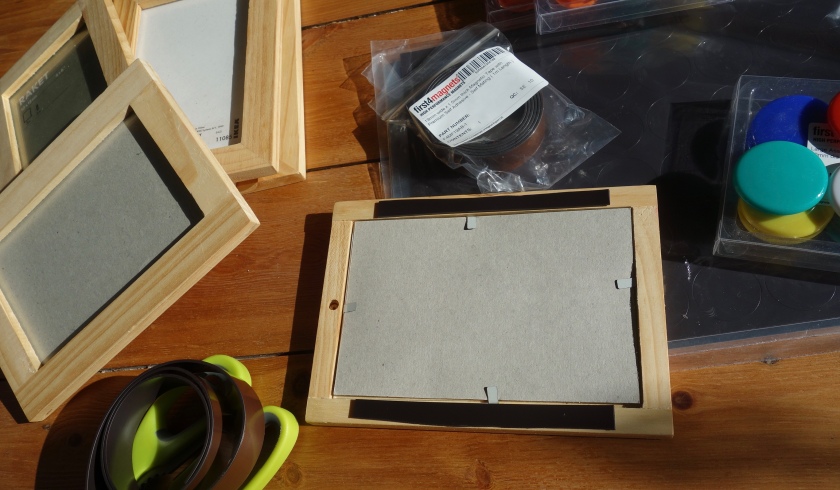 Cut to size and mounted onto the back of the frames with the self adhesive backing and the frames were up on the wall in no time.

Meet the “playroom owner” in waiting. He’s just checking out the quality of the goods. He was more than satisfied. 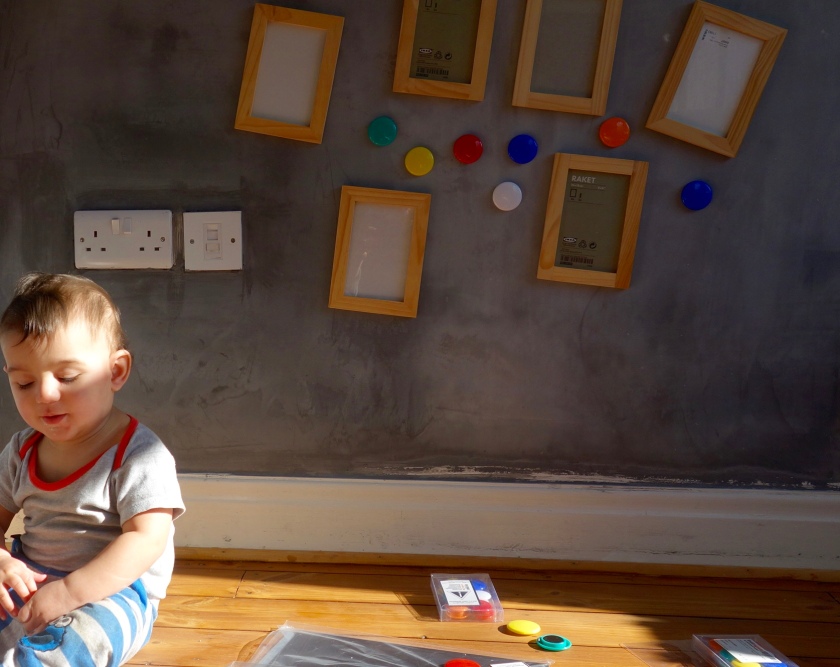 Obviously there will be pictures added to the frames (which will make more sense when the decorating is done) but for now, I was just so excited to see things plonk on and off the wall so easily. Magical.

I love it. Watch this space for the third and final part coming up in a few weeks. I’ll be sharing the finished room, all decorated, furnished and styled to the nines. ‘Citing!

(And just look at that grey again. Delicious.)

This project is in collaboration with British Gypsum. But all words and opinions are my own. Always. I only ever work with companies I really like and think you will like too. And thanks to First4Magnets for supplying me with some great safety advice and wonderful magnets.