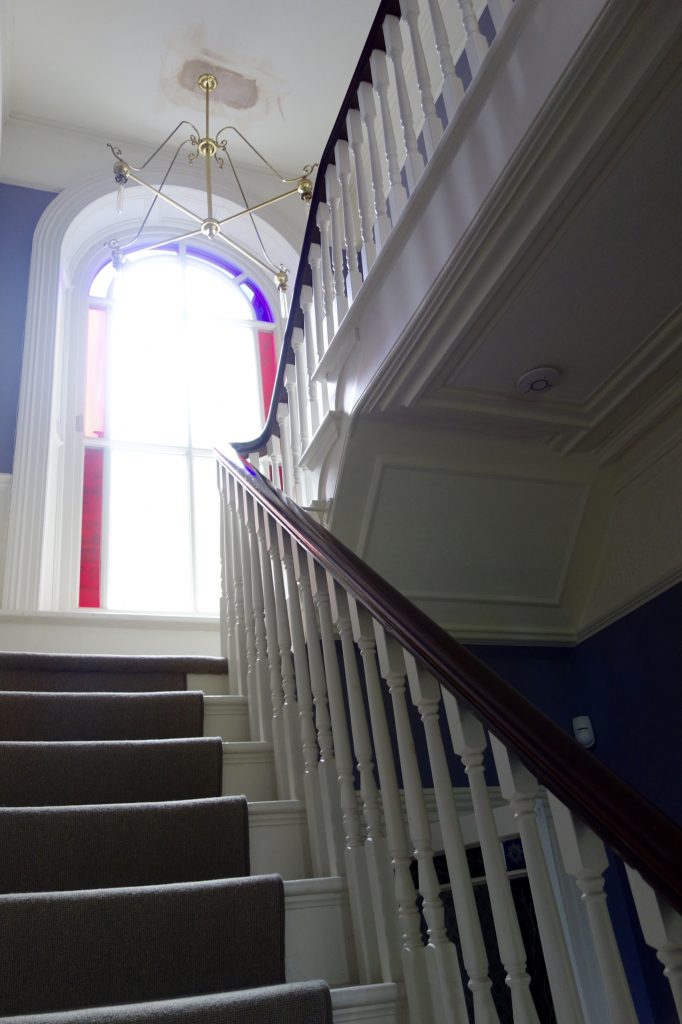 It’s been some time since i’ve updated this project. And i’ll tell you for why… it’s all been put on hold for one thing. One piece to fall into place. And now that piece is finally done the decorating can now start. In fact it already has. Hoobloominray!

How many people does it take to change a light bulb?

Well actually, fit a new ceiling light over the mezzanine of this landing area? The answer: Six. SIX!

This huge 4.5m drop was crying out a for a light. A huge statement chandelier. Why wasn’t there one there already I wonder? Grab a cuppa and i’ll tell you a story….

Once upon a time there was no light over a beautiful landing area. The mezzanine was sad, dark and lonely without a chandelier so the Making Spaces fairy decided it was time to call on some of her friends.

In order for the new light to be wired in, the Lighting Fairy needed to access the loft space. The existing loft hatch was only big enough for gnomes and birds to fit through, so a new human sized loft hatch needed to be fitted. The Making Spaces fairy called on her friend the Joiner fairy, who came and gave them a loft hatch fit for a normal sized King.

All this time, the Making Spaces fairy had been searching for a chandelier big and beautiful enough to hang proudly in this immense space. At least 1m in diameter and a drop of up to 1.5m. She Pinned and Pinned through the days and nights… most lights were too small, others too expensive and just when she thought she would never find something grande enough, within budget, she had one final check on eBay. It was there she discovered a salvaged brass light from a church. Perfect in dimensions, price and design.

A quick call to the eBay Fairy and it was bought, paid for and delivered the following week.

It was now time to fit the light. It sounded like a simple task… but it turned out not to be so. Remember that 4.5m drop? They needed a visit from the Scaffold fairy. Unfortunately, some hire companies did not know the sizes of their scaffolds. The first scaffold to arrive didn’t fit which made the Lighting fairy very angry indeed. It also made the Making Spaces fairy bang her head against her desk and shout “ARSE ARSE ARSE” very loudly. What they needed was a very special scaffold. One that could fit on the small floor plan of the mezzanine and be adjusted in height so both the Lighting and Plastering Fairy could reach the ceiling.

The right scaffold was finally found at HSS and delivered a few days later. This made all the fairies very happy.

The Lighting and Plastering fairy made the magic happen and finally the new shiny chandelier was hung and shining brightly.

Right, i’ve got to stop with the story telling now, it’s freaking me out a bit. As you can probably tell though, getting this bloody light up was a proper ball ache. No joke. I’ve learned A LOT from this project so far; my first time working in a period property. NOTHING is simple, NOTHING just happens. EVERYTHING has had some kind of problem attached to it. But it’s fine… we’ve all soldiered on and it’s up.

Would you like to see it? I saw it for the first time yesterday and I was nearly crying. It looks immense.

The homeowner’s love of crosses and all things linear continues here in the landing.

The solid brass structure has a very minimal yet traditional feel. Perfect for this space and looks like it was always meant to be here. That’s when you know you got it right.

We added some quirk with these LED Dimmable Tube Filament bulbs. Not easy to find by any means. But they do dim a little.

Once the ceiling and walls are painted in Farrow and Ball’s Peignoir and woodwork in Worsted this brass light will really come into its own. You can just see the testers bottom left in this pic.

It really is the perfect size for this space. Framed by the arch of the stained glass window beautifully.

So, what do you think? Was it worth all the drama? At the time it didn’t feel like it, but now it’s here and fitted, I think it totally was.