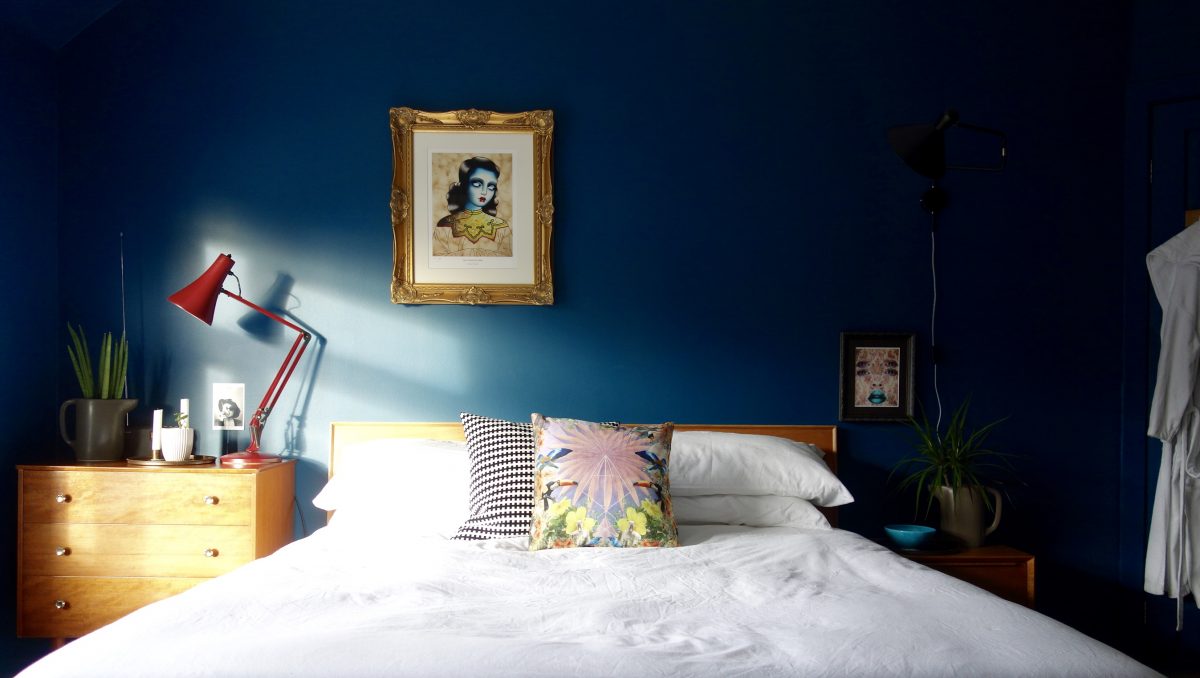 About three months ago I started redesigning our bedroom from scratch. Everything was going, apart from a chair, a light fitting and a rug. There was nothing wrong with the room, I just never really liked it. Bit boring for me and i’ve been wanting to do something more bold for ages.

If you’ve been following the bedroom saga, you might have heard me mention one or two times that we couldn’t find a bed. For ages. Then we did. One from Maisons Du  Monde, a French company. One which we had to wait for nine weeks for it to be made and shipped across the English Channel. During which time we slept on the floor and counted down the nights until we could climb back into a bed, rather than roll onto a mattress.

After some faffing with the shipping company who changed the delivery slot three times in two days, the bed and bedside table finally arrived and were delivered to my bedroom by two polite French men. To say I was excited is an understatement.

Both pieces of furniture are solid oak so were of considerable weight. The bedside came pre-assembled, so it just needed unpacking. The bed needed building, which was already booked in with my OH for that evening. Only six hours to wait. Eeee!

Nice init? The Portobello bedside table in solid oak for £139. I’ve just checked online and as of now there is one left in stock. So if you like it, better be quick.

Must be a European thing, but the bed frame doesn’t come with slats, so we picked some up from Ikea the weekend it was due to arrive.

These ones to be precise.

Six hours later, on the dot, OH arrived home from work. We ate a quick dinner and he got straight into building the frame. We were both so looking forward to having a bed again. 45 minutes later it was done and we were ready to put the slats down……………………………………………………

“Doesn’t it have the little notches to link the slats onto?”

Panic ensued. I was nearly crying by this point as it dawned on me that we needed these:

**Runs to Ikea site, sees if there are any in stock.**

No. Anywhere else? NO. It’s an online jobby. Delivery in one week. FFS.

Cue tears… whilst online ordering. OH went back upstairs to unbuild the bed. We rolled back onto our mattress and went to sleep in a right huff.

One week later, the slatted bases arrived on time. I built them that afternoon, sorted the bedroom out and did some of my styling nonsense.

Finally the room was finished. All the furniture was in, the lighting was fitted, artwork had arrived and been hung. That night we had a bed. And we bloody love it.

The Portobello oak bed is £499 plus shipping, which I know sounds expensive, well it is. But it’s such a classic design and just won’t date. The quality of the wood is excellent and the clean lines mean it’s going to last us a very long time in both form and function.

I couldn’t find any other furniture company doing a mid-century style bed in a EU King Size. Nobody. I’m so glad I kept on with the search and found the Portobello range at Maisons Du Monde. The wardrobes are gorgeous too. In fact it all is.

The rest of the bedroom just feels right now there’s a bed taking centre stage. More artwork by Ruben Ireland hangs by the Ikea Ekenaset chair, one of the three pieces that stayed from the original room.

The bedside table next to its French buddy and the Ogilvy wall light from Made.com.

It’s been such a hard room to photograph as it’s not capturing the wall colour at all. Valspars’s Midtown Magic is a blue based teal. Not a flat blue. There’s plenty of green in which I can’t seem to make appear. In fact above, it looks almost indigo. Bonkers.

There might be a new rug added at some point, but for now, the idea of spending any more money on this room is not on the Christmas list. For this year anyway.

I really hope you like the new design peeps? I would love to hear your thoughts on this room makeover.

What do you think?